Travel Tips and Tales: Axiom Quartet and the China Tours

While touring is exciting, it can also be nerve-wracking and just a bit stressful.  What happens when your performances are halfway around the world, you don’t speak the language, and your cello doesn’t fit in the overhead compartment?
This summer, PARMA launched our first season of China tours with a number of the touring artists embarking on their first international performances. Since this is summer of firsts for us as well as our artists, we wanted to get the behind-the-scenes experience, and learn from our artists for future tours.
Houston’s Axiom Quartet wrapped up their China tour in early August.  We caught up with members to gather some of their impressions as they looked back on what had proved to be an unforgettable experience. 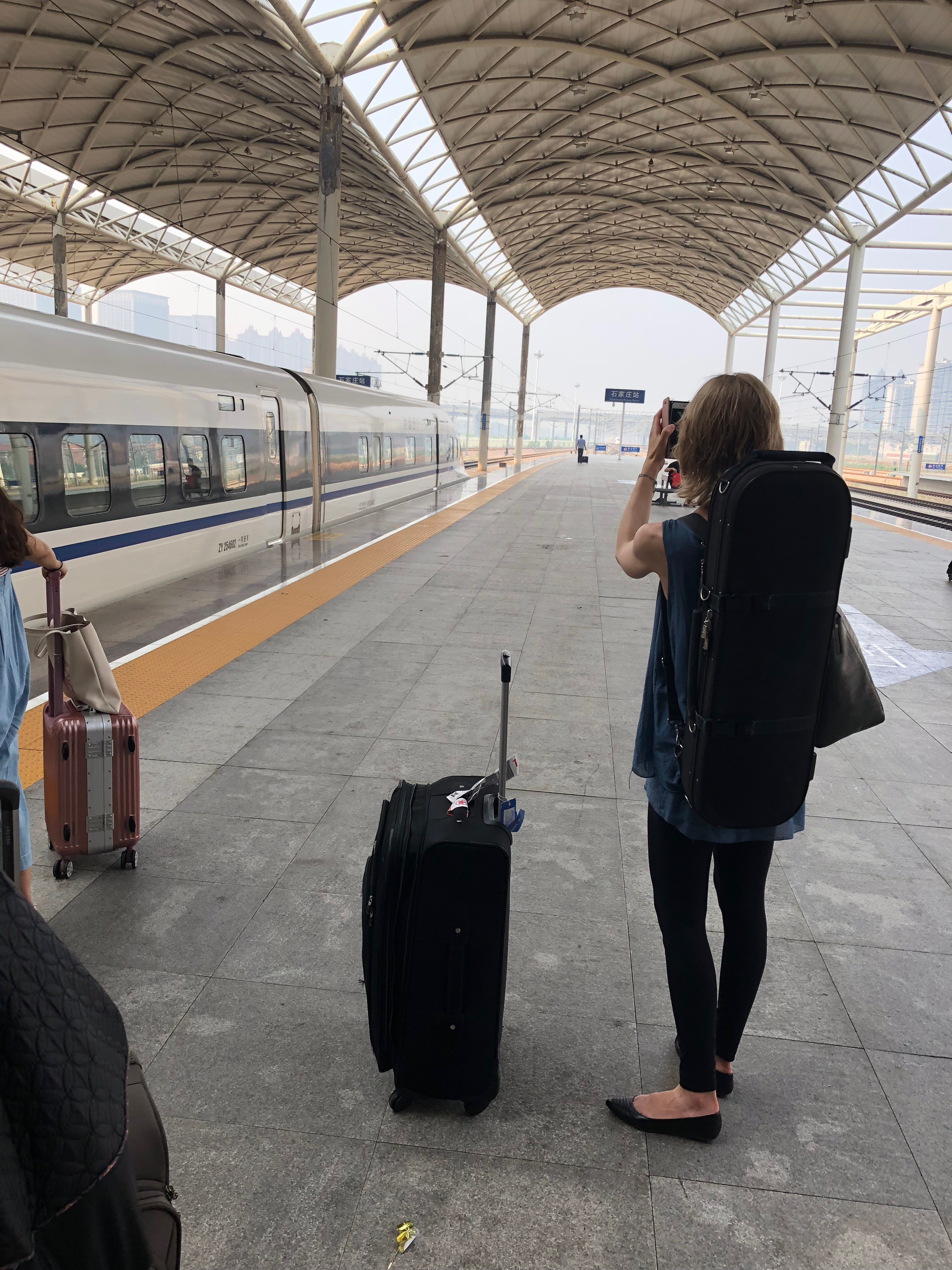 Taking photos of a bullet train

The quartet toured China for nearly three weeks, giving about a dozen concerts in as many different cities. Their tour spanned a considerable amount of the nation —  from the south, close to the Vietnam border, to the northeastern tip, near Russia.
The tour stops included cities with populations reaching into the millions of people and performance venues with capacities up to 2,000.  As the quartet enthusiastically stated, “we definitely enjoyed huge exposure, and were very lucky to experience such a diversity of geography and history in each of these cities.”
Cellist Patrick Moore explained that traveling for long hours before playing was a fear of his going into the tour, but while their schedule was certainly packed, the reality was not as challenging as he had anticipated. “Thankfully, we were well prepared for this trip and discovered that we could in fact play our concerts nearly in our sleep,” he joked. The bullet trains helped with the busy schedule, and were described as “very comfortable especially if you have first class tickets. PARMA and their partners did a good job of booking first class for us as much as possible.” 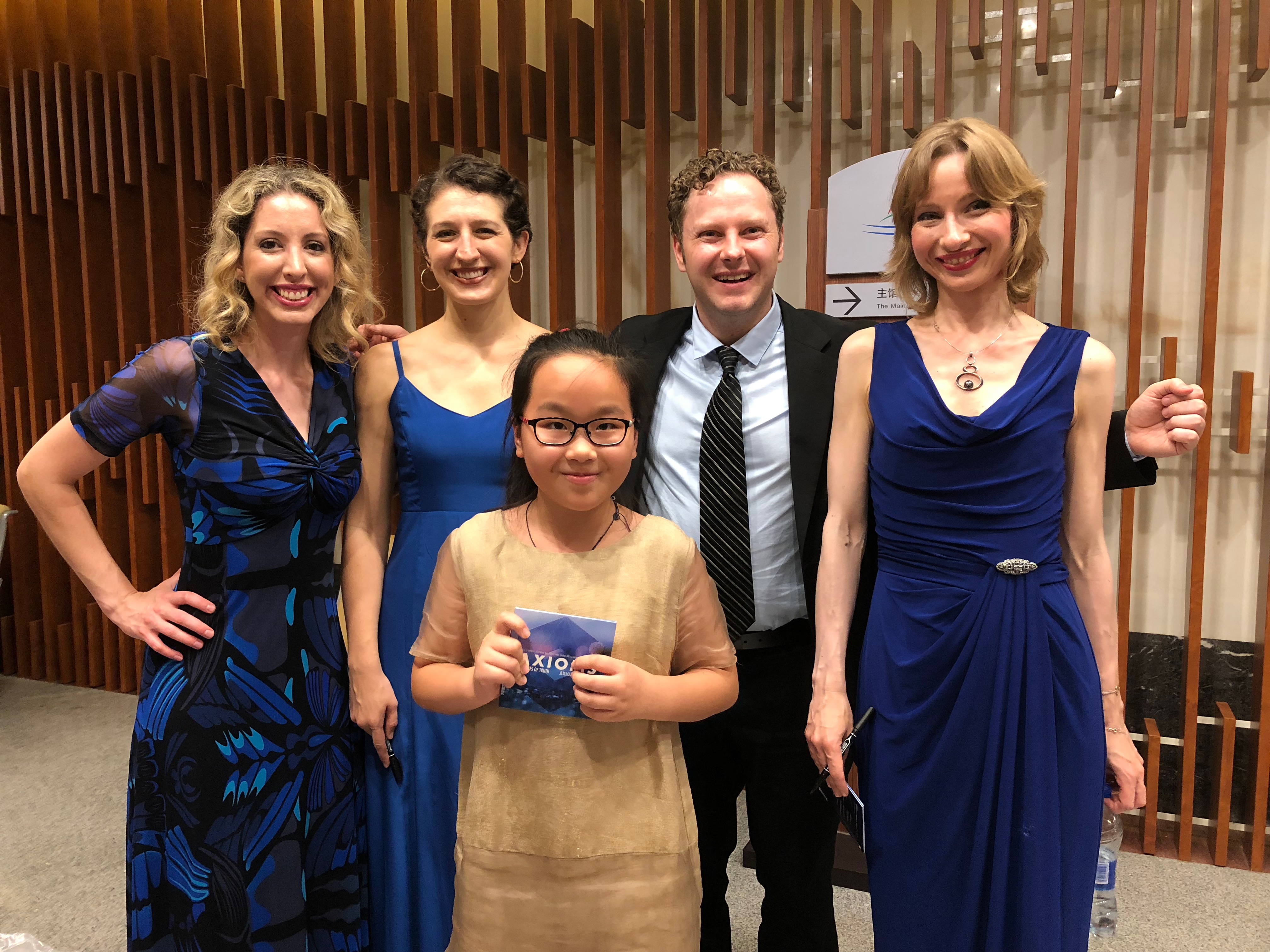 Axiom Quartet meets the audience after a performance

The PARMA team is made up of almost entirely musicians, and our resident string players were particularly curious about the experience of traveling halfway across the globe with instruments, especially one as large as a cello. Patrick admitted that traveling with the cello was occasionally cumbersome. “However, most of the time people were accommodating of our instruments and were quite careful around them.” One piece of advice we found quite interesting: “Pack your rosin in you suitcase. Apparently, it looks like bomb material to China security in the airports.” 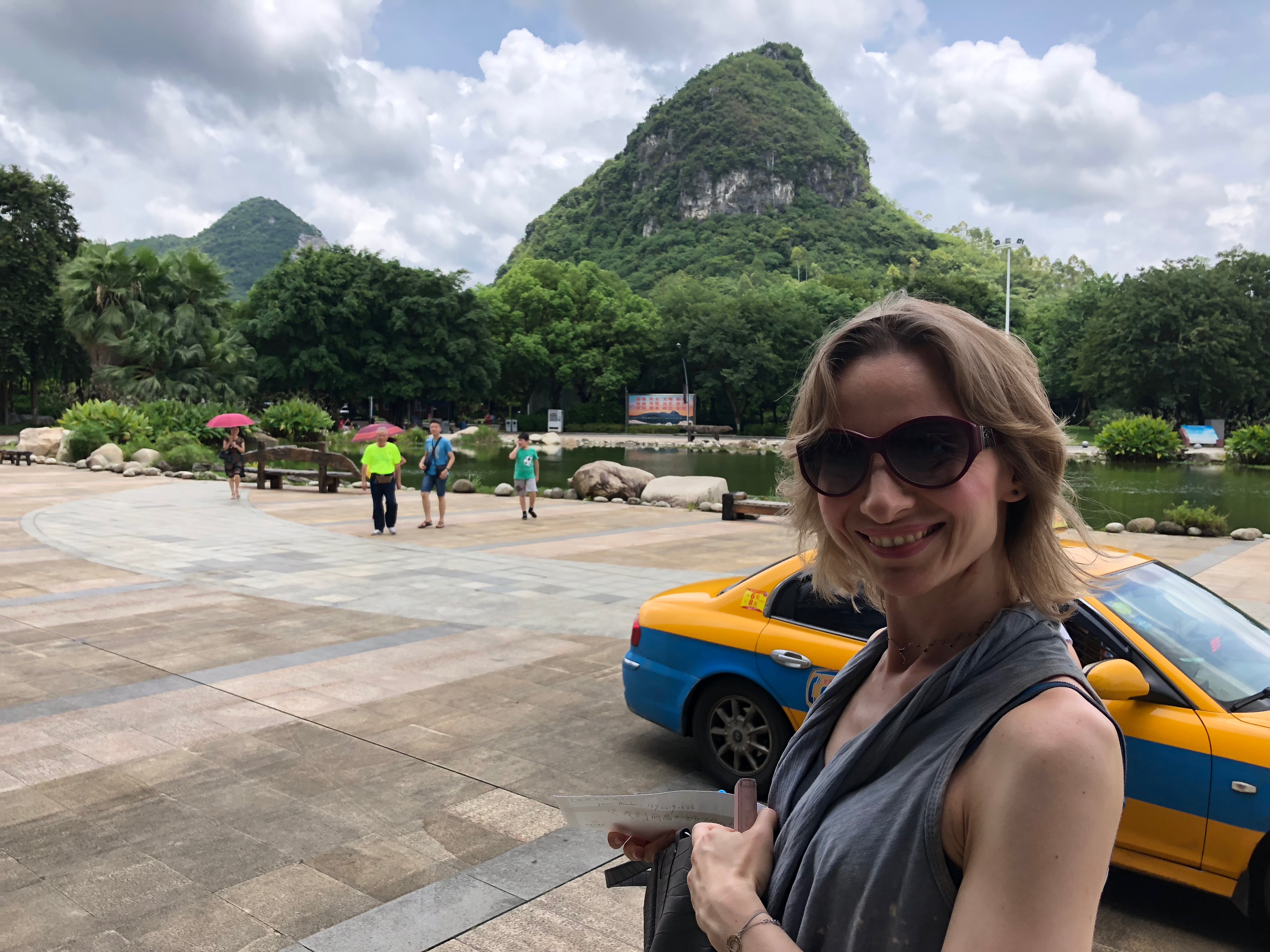 Asked what the most memorable part of the trip was, Patrick had an immediate answer ready:  “Liuzhou was magical. It is nestled within these fascinating limestone craggy verdant mountains that jut out of the ground like peaceful sentinels.  They are unique to the region and are quite beautiful. We also stayed right next to an incredible outdoor shopping mall that had delightful shops with cool architecture. The city also had a Fantastic Stones Museum that was well worth a visit. The region is famous for these stones that come out of the local river, which are highly coveted by rare art collectors.” The quartet also spent some downtime in Dalian, a coastal town with relaxing beaches – a favorite of the quartet’s violinist and Brazil native Ingrid Gerling. 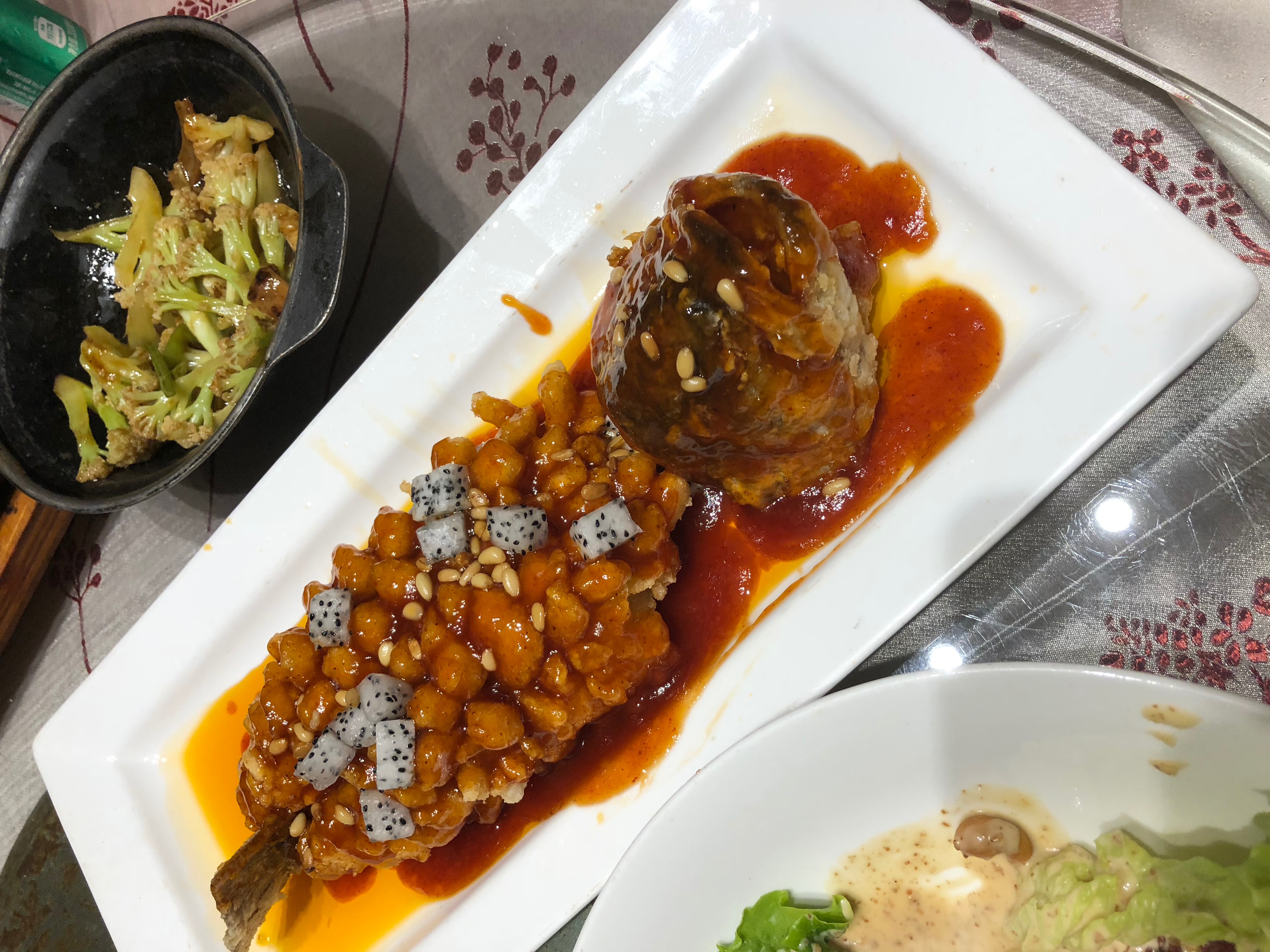 Food was a definite highlight. “We all now LOVE dragonfruit. It’s the most delicious combination of kiwi and citrus.  Sour Fish Soup, though not terribly attractive sounding, is amazing. It is sour, sweet, and just plain delicious.” Another less than attractive sounding meal was the Stinky Noodle Soup, which Patrick described as “fermented bamboo in a river snail broth. I was warned that it was smelly and I may not like it.  I loved it. I’m glad I am so adventurous when eating. You never know what you will like.” Fish, the quartet said, is easily the best meat in China. “It’s always fresh and delicious. Produce was also a winner in China. Be sure to visit the local supermarkets as they have an incredible, and mostly cheap, selection of food and produce.” 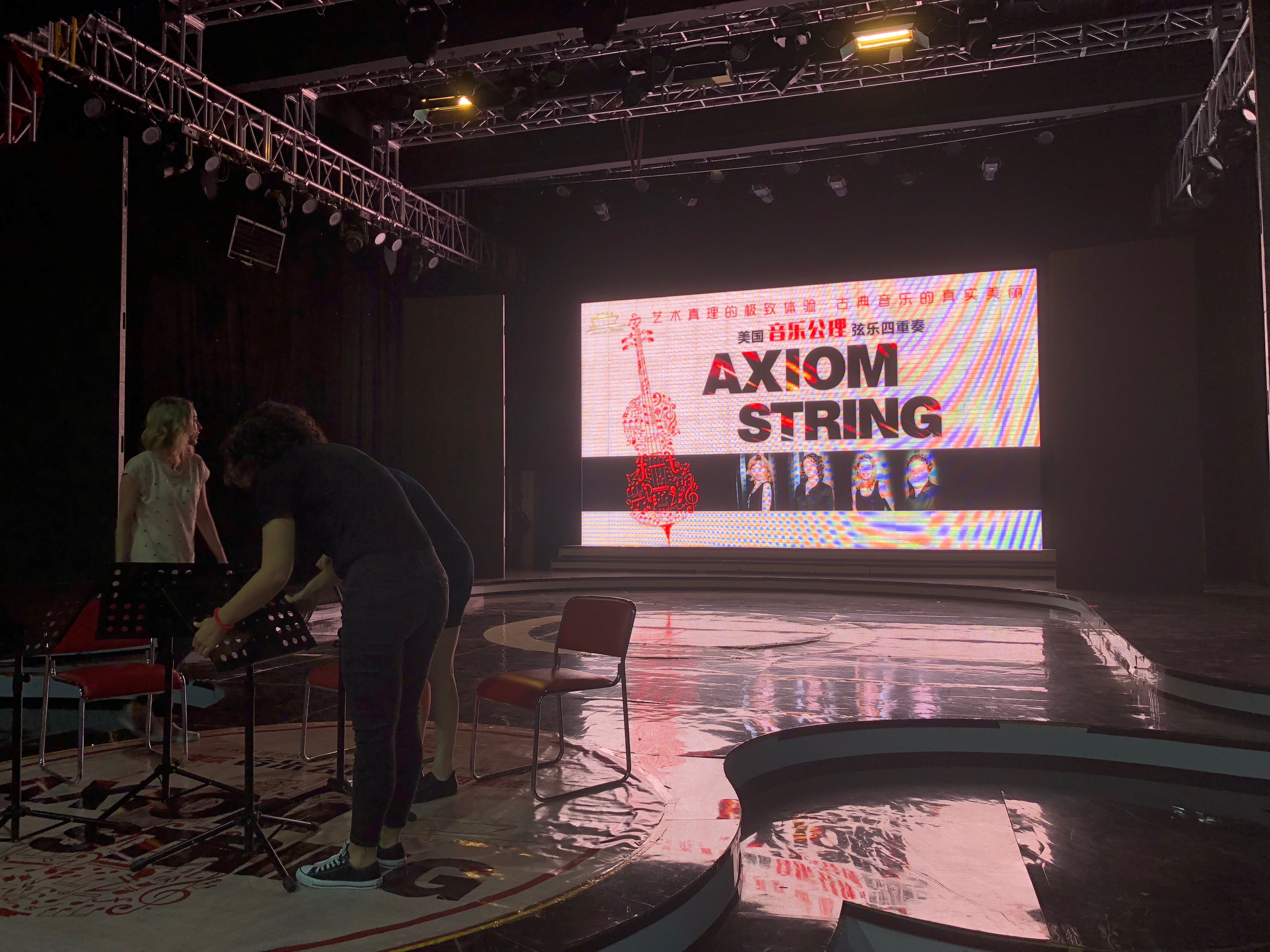 Speaking of cuisine, the quartet left PARMA with some helpful food for thought, especially as other artists prepare for future tours in China and beyond. Their tips may apply to anyone traveling to China, so if you’re planning a trip abroad soon, you may find a question answered here that you didn’t know you had!

Thank you Axiom Quartet for sharing your experiences with PARMA!