THE INSIDE STORY: Tucker Biddlecombe and MUSIC IN THE LISTENING PLACE

Today, Tucker is our next featured artist in “The Inside Story,” a blog series exploring the inner workings and personalities of our artists. Read on to hear about Tucker’s quick thinking while performing that saved a wedding from disaster…

When did you realize that you wanted to be a choral conductor?

I spent much of my undergraduate career (and some of my graduate years) considering vocal performance. You know, I had some chops, but I was never really happy after any type of performing. If I did 10 things and 9 were right, I would be thinking about that one things that didn’t go well. Including the interval between performance opportunities exacerbated my frustrations. When I started conducting I was horrible at it, like we all are, but I found that the things that went well were on my mind more than my failures. I could re-create those positives and eliminate the negatives more readily. This makes me think of applause.

I’m much more comfortable turning and acknowledging the choir behind me than accepting that applause for myself. Why the choir? No one sits on the bench. Everyone has a skill they bring to an ensemble, and it can be utilized to full effect by the right person.

What was the most embarrassing thing that happened to you during a performance?

I played a wedding once for a church with a toaster – an old digital organ. I had a violinst there who showed up with J. S. Bach’s Air in a different key than I had it in, so I used the transpose dial on the organ and set the appropriate key, rather than sight transpose by three half steps. I also had a trumpet player there ready to play a recessional – something like the Clarke Trumpet Voluntary. The time came for “I now pronounce you…”, they turned, people started clapping, the trumpet player breathed, and I was still in the wrong key. I heroically lunged for the transpose dial, turned too hard, went past the correct key, played for a bar, then came back down. The searing look I got from that bride still sticks in my mind, and reminds me to go over the little things, even if I think don’t have to.

New York. It’s the center of the universe. I can’t think if there’s not enough noise going on around me. 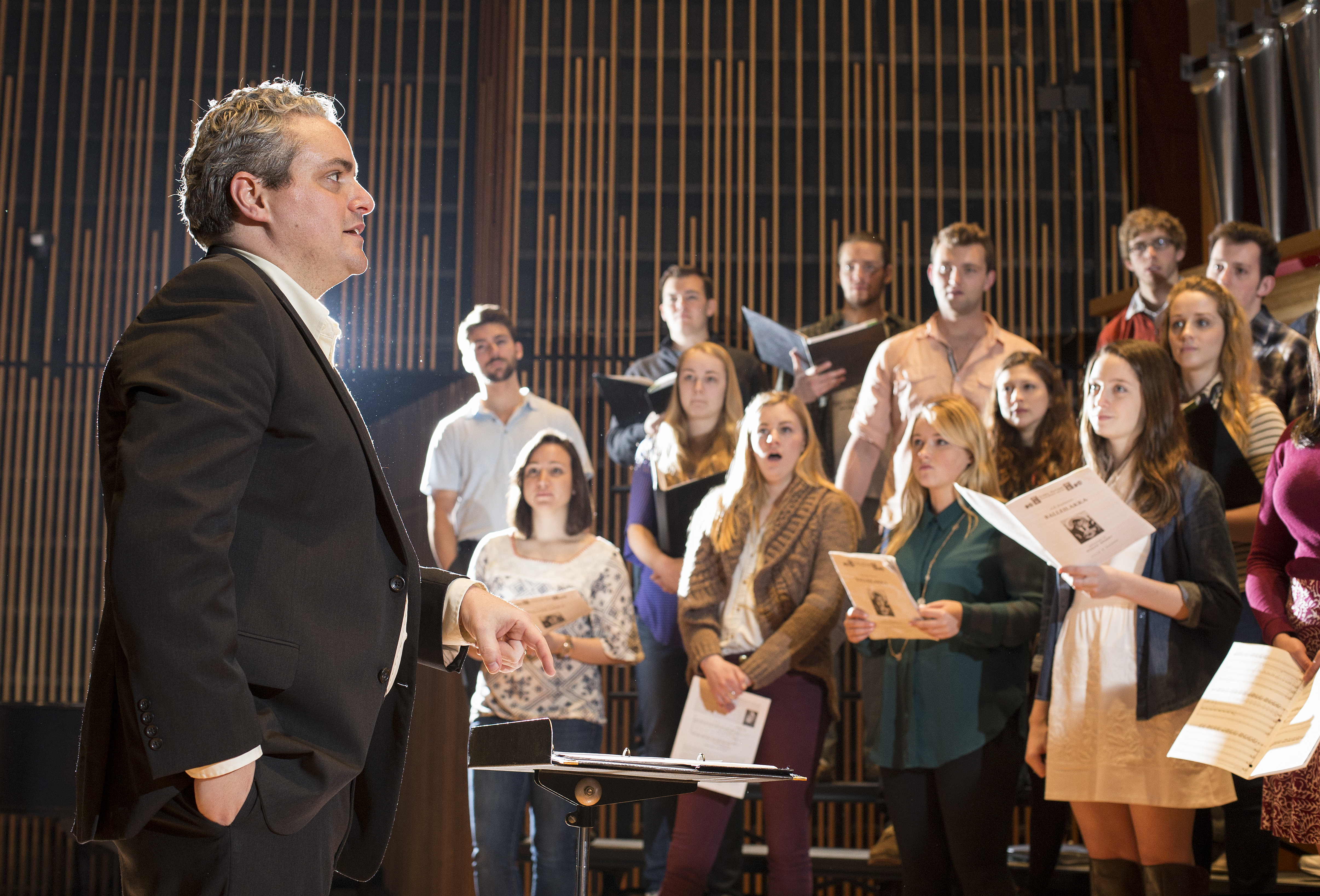 When you’ve cut an album as a conductor I think you listen to it at least a thousand times during the editing process, so at the moment I’m a little numb to it. I will say that the 3rd movement of Ravel’s Trois Chansons always serves as a point of pride. So much text so fast, and no picnic to try and maintain the ensemble. The 6th movement of the Dove was deadly hard to create a balance between the two halves of the choir. The kind of sensitivity the students sang with was truly inspiring. Finally, if you listen closely on great headphones you can hear drumming rain. We recorded in a beautiful cathedral near campus and there was steady rain outside. It really takes me back to that day every time I hear it.

From an overall sense, Vanderbilt is introducing itself to the listening public, but for me it’s an achievement in terms of creating pride and community. When I first arrived at Blair in 2012, choral singing was very low on the hierarchy of most students and faculty. Over the years we’ve been able to change hearts and minds through creative programming, performance excellence, and community building that has culminated in the many hours the students gave of themselves to complete this project. It’s very gratifying to me personally to see one of my students share the link to the album, or reading comments form prospective students who are curious about our program.

Is there a specific feeling you want listeners to tune into when hearing your work?

My students are incredible people. They are highly intelligent and bring a musical sensibility to complicated music. I hope listeners can sense how important it is for our mission to always be prevalent, singing in a variety of different styles expressively and authentically.

MUSIC IN THE LISTENING PLACE is now available through Navona Records for streaming or purchase. Click here to explore this new album.