THE INSIDE STORY: Marta Brankovich and BLACK SWAN OF PIANO

Marta Brankovich was born in Belgrade Serbia. She was only 21 years old when she graduated from the University of Belgrade, as the youngest student with the highest GPA in her class. During her studies she received numerous international and domestic awards, scholarships, and public recognition, including a special honorary scholarship from her country for building an outstanding career in the United States. She currently lives in Miami where she received her second master’s degree in piano performance in the class of Kemal Gekić at Florida International University. Since 2010, Marta has held over 150 solo recitals in major halls of the US East Coast, receiving positive reviews and being called ‘A New Force Of American Pianism’ (News Magazine), and ‘Black Swan of Piano’ (Miami Herald). She recorded for TV and radio in Europe and the United States, and has collaborated with many international artists, including a piano duet with Kemal Gekić, all of which received positive reviews.

In the summer of 2016 she went on her second concert tour in Europe in four years. The tour included 14 recitals and lectures at various music concert venues in six different cities including Prague, Belgrade, and Skopje. While on tour in Europe, she recorded for international TV and radio stations, including famous Radio Vltava, and Radio Prague Channel 3. In the following two years, Marta was invited on another European concert tour which included countries such as Germany, Italy, and the Czech Republic. She was also invited to do her doctoral studies in Europe. In January of 2017, Marta became a recording artist for PARMA Recordings. Her debut album on Navona Records features music by Serbian, French, and American composers of the 20th and 21st Centuries. Recently Marta became a member of Friends of Collegium Musicum (FOCM), a group helping young musician around the world obtain scholarships for Florida universities by performing recitals in Florida. Marta is the owner and artistic director of the School for Talents Agitato located in Miami FL.

Today, Marta is our featured artist in “The Inside Story,” a blog series exploring the inner workings and personalities of our artists. Read on to learn about Marta’s favorite creative city north of London…

My absolute favorite artist was classical concert pianist Marta Argerich from the very moment I heard her performing Prokofiev’s music. I was only 6 years old at the time and was mesmerized by her fast hands, dominant look on the stage, and the fact that she had long black hair and same name as me. In my teenage years I was lucky enough to meet her and through the course of time listen to her at numerous recitals in different parts of the world. On the very first event of our meeting back in Belgrade Serbia, she wrote a special note to me: ‘From Marta to Marta all the best.’ I still have that note and take it with me on my own recitals like a special relic or a charm.

I remember that my mother used to take me to piano recitals from a very early age, in a famous concert hall called Kolarac in my country. Hearing pianists from Russia sounding so perfect, fearless, and powerful inspired me to no end. Their performances of Rachmaninoff and Chopin created a range of emotions in me that never existed before. From age 5 I started dedicating numerous hours by the piano with my professors (who were, by the way, Russians too), and years after I ended up working with some famous classical concert pianists who would come to my country and hold master classes for talented students. They changed my life and definitely helped me on my pianistic journey to create my own style.
However, my family always tells a funny story about me receiving mini wooden piano at age of one from my grandfather from Austria for the winter holidays. I would sit for hours by that toy and play endlessly, not wanting to do anything else. They say that I wanted to be pianist before I could speak.

If you could make a living at any job in the world what would that job be?

Long time ago I heard an expression ‘You don’t become classical pianist. You are born into it.’ I always knew that being a piano was my “must.” I simply had to do it because it was and is my truest organic expression, a calling that defines me as an individual. Since I have practiced all my life and lived a positively stressful life of constantly performing, I often dreamed as a teenager of escaping for at least few weeks and letting it go. Back in Europe, circus troupes were very popular and impressive, and I often dreamed of running away with them and being part of the coolest and shiniest circus act. I was certain that I could be the star of the show and do very well. The entertainment part of me wished to do more adventurous jobs than just sitting in my room and practicing for hours. In time, however, my practicing paid off, and with piano I got to see the world from Paris and Prague, to New York and Chicago, so I would never change it. Being a classical pianist means adventures never end.

Back in the year of 1994 I went to visit Edinburgh, the capital of Scotland, with my father. I instantly fell in love with its beauty and uniqueness. It’s one of those cities where you can get lost and creatively work for many months. It’s smaller than London but very productive, carrying truly special energy. I still remember that I felt like I was in a fairy tale surrounded by castles, Loch Ness legends, impressive people, and the coolest streets and shops that I’ve ever seen. The art/performance scene is quite amazing too, and I could definitely see myself practicing and composing over there for a long time. After all these years of traveling, Edinburgh is still my favorite European city that I often find myself talking about. I did promise my father and family that one day I will go back there, taking them for a much longer visit. You never know – I might end up in Edinburgh in the near future.

What was you favorite musical moment on the album?

My favorite musical moment on the album was the audio recording session with my former piano professor and one of the biggest classical concert pianists alive, Kemal Gekić, who is featured on the album as a special guest. We spent a few fun hours recording in the Wertheim Performing Arts Center at Florida International University, guided by the very composer of the composition for two pianos, Yin and Yang. Being able to rise to the occasion and play together with him made me proud, knowing that his trust and belief was given to me. It was one of the most important moments in my entire career so far. I will always remember it and I love how that very moment is captured on BLACK SWAN OF PIANO.

What does this album means to you personally?

I was purposely waiting to publish my first American album for a very long time, so that I could create something truly unique that would allow me to portray my true energy and nature as an artist. I always feel empowered when I am recording and performing on the stage, and I think that my album BLACK SWAN OF PIANO captured that feeling together with my cover. This cover in particular has a lot of meaning for me since it tells the story. Showing my hands bloody explains the search for a perfect performance in a new, contemporary setting where the artist needs to go all the way, to the bone, to sound truly different and recognizable.
I love that my album features my own musical story of my Serbian heritage and of the composers who determined my career in recent times. The fact that my two original compositions are also recorded on the album makes it even more special because in time I want people to hear and see a performing artist who speaks a vast musical language and is able to go beyond plain performance, straight into the field of creation. 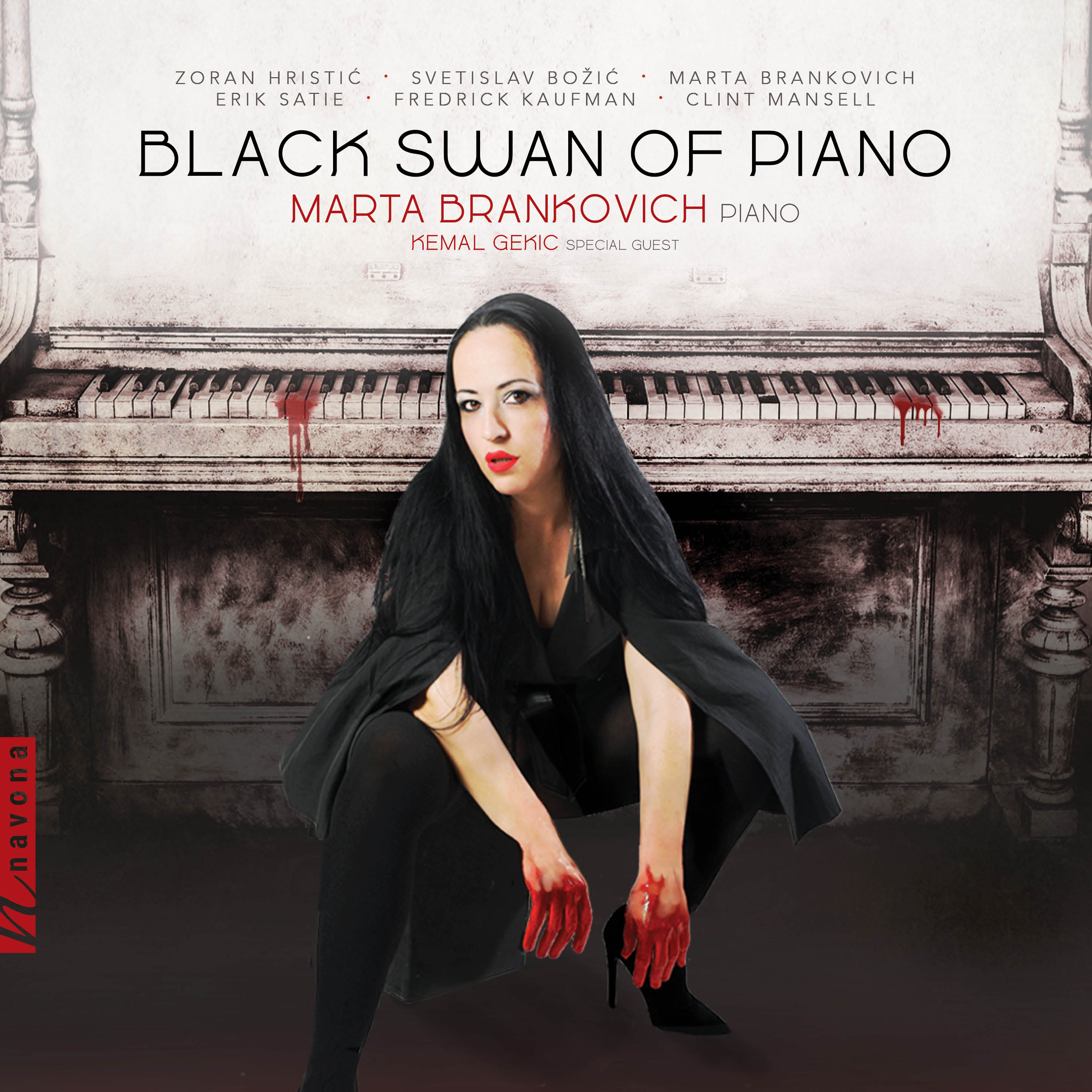 BLACK SWAN OF PIANO is now available through Navona Records for streaming or purchase. Click here to explore this new album.