THE INSIDE STORY: Marec Béla Steffens and TWO CELLS IN SEVILLA

“Globolinks, you stand no chance!” Could a young Marec Steffens have known after watching his first opera that this genre would be a guiding force throughout his life? Born in Hamburg Germany, Marec Béla Steffens lived in Budapest Hungary during the early 1990s and in Houston Texas in 2005 and from 2012 to 2016. He has written six books of original, often absurd fairy-tales, published in German, English, and Hungarian, and has become an accomplished author of libretti. Scenes from Marec’s original libretti (“The Tramway Conductor of Venice” and “Kater, erzähl’ mir ein Märchen! / Tomcat, Tell Me a Fairy-Tale”) with music composed by Mario Wiegand were performed in the final rounds of opera competitions in London at Sadler’s Wells by the Genesis Opera Project, and at Rheinsberg Castle near Berlin Germany. TWO CELLS IN SEVILLA presents a unique and special scenario in which Marec collaborated with his father, composer Walter Steffens, to produce an opera using Marec’s libretto and Walter’s compositions.

Today, Marec is our featured artist in “The Inside Story,” a blog series exploring the inner workings and personalities of our artists. Read on to hear about the time Marec and his wife went to the opera during a taxi driver strike in Budapest and none of the technical staff showed up…

When did you start going to the opera?

When I was four and a half years old, my grandfather gave me a model railway for Christmas, and my father took me to the opera for the first time. Both became lasting passions. The opera was Help, help, the Globolinks! by Gian Carlo Menotti, and it was its world premiere in my native Hamburg Germany. The opera is about extraterrestrial invaders who have landed on earth. They are very aggressive, and only music can keep them at bay. I was completely taken in. Back home, I drew up a big sign and posted it in the window of our apartment on the fourth floor: “Globolinks, you stand no chance! At this place, we all make music!”

What does opera mean to you today?

Opera is arguably the most complex of all art forms. So many things have to come together to make a performance truly excellent. But when that happens, against all odds, it is pure bliss. The miracle of the human voice, unplugged, filling the entire house… and even when the full orchestra is playing and the choir and several soloists are singing, one can still make out each solo voice separately. The drama on stage, the emotion of singing… it’s unbeatable.

Tell us about a special performance.

In 1990-91, my wife and I lived in Budapest Hungary. I had a scholarship to do research for my PhD in economics, right after the end of Communism. Once the taxi drivers were on strike, and not only that, they were blockading a number of streets, including all bridges across the Danube. We had tickets for the opera, and we went. All the technical staff had not shown up, so there were no costumes and no stage design. But the singers, choir, and orchestra were there and performed with more than usual enthusiasm. This was much appreciated by the audience, and although we knew we all would have to walk for most of our way home, we made them repeat the Chorus of the Hebrew Slaves. We all walked home knowing this was a performance not to forget.

Not many authors today write a libretto. Why do you do that?

Why would a sane person write a libretto? When you write a couple of poems or a novel, you look for a publisher, and if you find none, you can still publish a book On Demand. With a libretto, you need to find a composer – one who likes your words, and hopefully one whose music you can digest. Then you have to wait. And to wait. And to wait. When the composer is done at last, you still need singers, instrumentalists, and a stage. Plus, not to forget, an audience who is not scared to attend a modern opera. And you go through this entire process knowing that some of the best operas ever have a libretto that is poor, illogical, and/or a complete mess!

Still, I write libretti. I know that nobody will buy an opera ticket for the sake of the libretto. But it is my text that set the composer in motion. And it is an overwhelming feeling when my words come out of a singer’s mouth!

As a German, why did you choose to focus on Spanish stories?

Of course you may say, why do two Germans meddle with such icons of Spanish culture? Why don’t they leave it to the Spaniards? On the other hand, who wrote the Swiss national drama, Wilhelm Tell? Schiller the German. Who wrote Carmen? Bizet the Frenchman. Indeed, I find Spanish culture most inspiring. A character like Don Quixote, creating his own world while his author sits in debtor’s prison for alleged embezzlement. Don Juan, the seducer of all seducers, created by a monk. And the cells of both of them were in Seville, the city that is the location of more opera plots than any other!

I have always been intrigued by this question: what incites creativity? Since the creators of Don Quixote and Don Juan lived in the same city, I had planned for years to bring them together and to put them on stage. Competition is of course a strong driving force. I make the two authors compete for the attention of the same lady. Plus, she is the cook, and both of them are starving. So they have a double motive to fight for her. That sets their creativity in motion and makes them invent those two powerful characters. Then I learned that the Round Top Theatre Forum will focus on Cervantes and Shakespeare due to their double anniversary in 2016, and I knew I had to expand my plot.

What comes next? A new scenery, or another Spanish topic?

In fact, I have another opera project going on, for which Mary Carol Warwick is the composer. It tells the story of Bernardo de Gálvez, Spanish governor of Louisiana at the time of the American War of Independence. He supported George Washington first with arms, smuggled on behalf of the French and Spanish kings while Spain was still neutral. Later he ran an entire military campaign, taking places like Baton Rouge and Pensacola from the British. We had the first two scenes performed at Houston’s Rice University and are going to deliver another instalment on October 30th. Trust me, this guy is crying to become an opera hero!

This is a unique album, considering few (if any) libretti have been written by a son for his father. What do you think of his music? 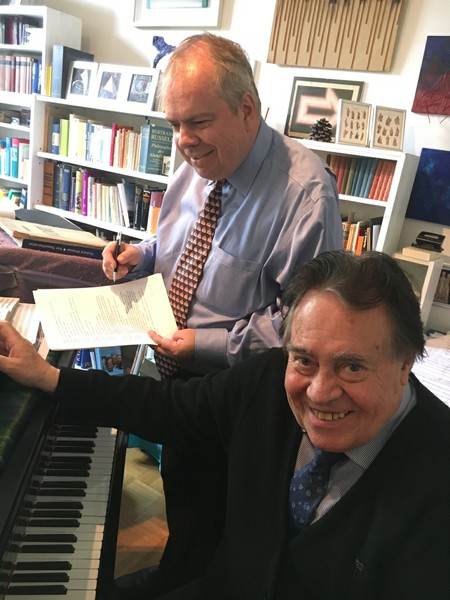 Of course, I’m not neutral when it comes to my father’s music. I’ve grown up with it, and he wrote many pieces that I do like very much indeed. His music presents professional challenges to the performers. They may struggle at first, then enjoy it more and more, and often tell him in the end how deeply satisfied they are. And audiences do enjoy his music! Many people are skeptical – but then they realize it’s not the kind of ultra avant-garde that can drive some audiences away. My father is very conscious of the tradition of the great masters. What he writes does not sound Broadway-ish or like film music – it is no doubt modern, but people can relate to it. In TWO CELLS IN SEVILLA, watch for the moment when the Servant represents the giant Caraculiambro, or when Don Miguel mocks his opponent as “Brother windmiller, you windy monk!” I trust you will see what I mean. 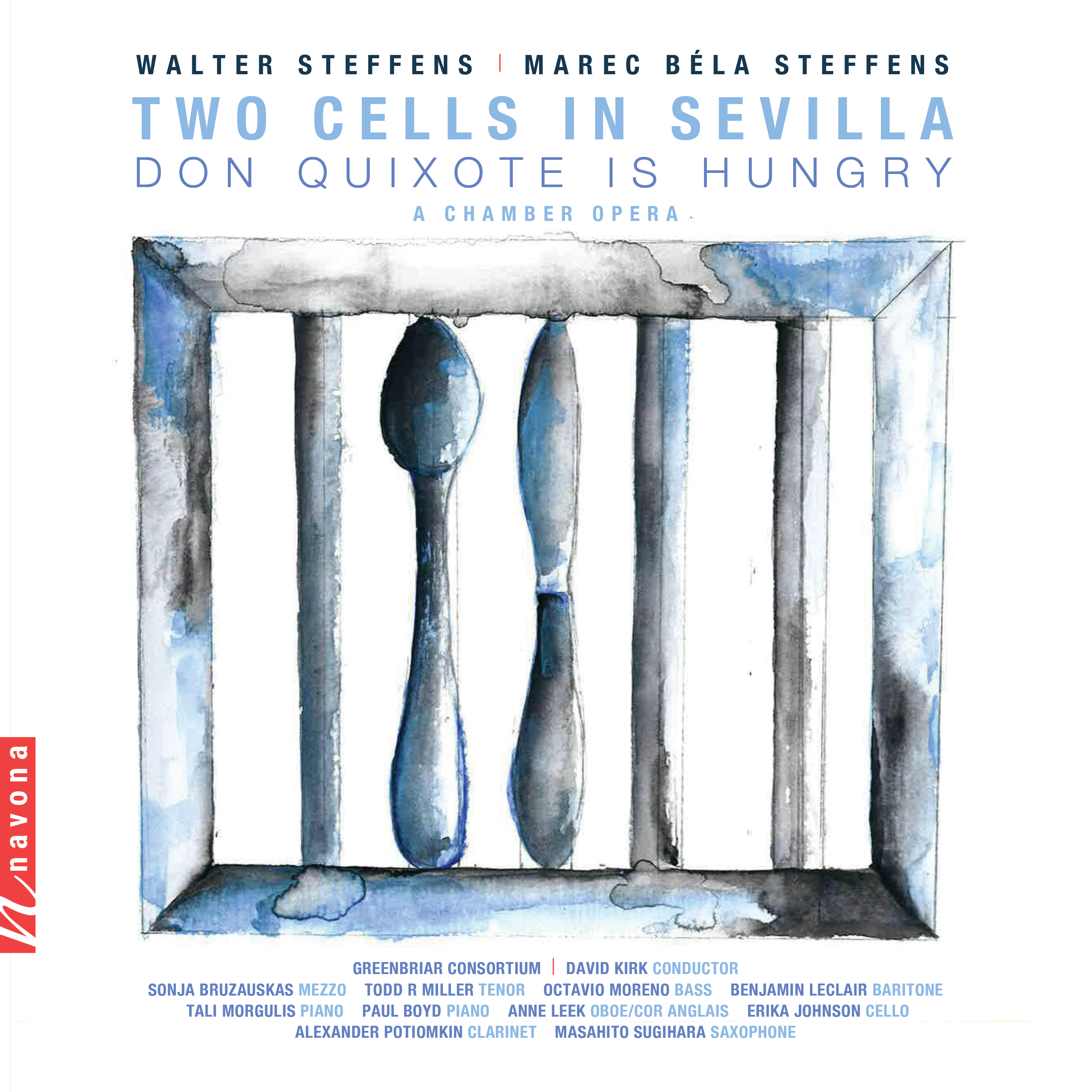 TWO CELLS IN SEVILLA is now available through Navona Records for streaming or purchase. Click here to explore this new album.