The Inside Story: Kirk O’Riordan and AUTUMN WINDS

Today, Kirk is our featured artist in “The Inside Story,” a blog series exploring the inner workings and personalities of our composers and performers. Read on to discover how running obstacle course races may tie into his professional life…

I had a lot of influences, in a variety of styles. I was fortunate that my family was friends with several members of the Cleveland Orchestra, so I got to grow up going to those concerts and getting to hear so many remarkable performances. As I developed as a saxophonist and started preparing to be a music major, I was inspired by people like Fred Hemke, Eugene Rousseau, and John Sampen, all of whom I was able to study with at some point in my training. In the pop world, I have always been a huge Depeche Mode fan, and I think there is some lasting influence from them in my serious writing, especially with regard to how I hear instrumental color and how I layer those colors.

To be honest, I can’t recall a time when I didn’t want to be an artist…but the more important realization for me was that point at which I knew I could be an artist. That took a long time. I think that mostly happened after being able to look back and say to myself that I have been “being” an artist without having thought consciously that I was trying to be one.

I think the most unusual performance I have done was a pop concert I did as a faculty recital at Lafayette. I mixed some of my classical-inspired pop songs with some covers… had some automated lighting, the whole thing. Not sure if I will do that again, but it was a good time, and it forced me to do some things—like sing in public—that involve some risk.

Not sure if I really have one, but I am very into running obstacle course races. I typically do 5-6 each summer… I really enjoy the physical and mental challenges and the feeling of accomplishment after giving a strong effort to overcome them.

I am doing that job now. I wouldn’t trade the work I do at Lafayette for anything… I have terrific students who work hard; I get to conduct great music with the Concert Band; I get to expose people who may never have thought about composing and/or conducting to those fields and give them an opportunity that students at many larger music programs can’t get. Every semester is a different, new challenge.

Over the years, Holly and I have had several residencies at the Avaloch Farm Music Institute. One of those residencies was used for the rehearsal period before we recorded AUTUMN WINDS. They do a wonderful job creating a wonderful environment for artistic growth, especially for performers.

Holly and I went to Spain for the IDRS conference two years ago, and we adored it. It was wonderful… the people, the food, the history. I think if we ever have the opportunity to have a residency in Spain for any length of time it would be a transformative experience.

Are there other beautiful places that inspire me? Yes, of course. Holly and I enjoy art museums… we both find a great deal of creative energy in places like the Art Institute of Chicago and MOMA. Other artistic disciplines, especially visual art, regularly find a way into my music, so it is nice be in places where I can absorb those stimuli.

I was trained as a saxophonist, and though I don’t perform regularly I would say I still have pretty good skills. I also conduct a lot. Were I to do it again, and choose a fully new instrument to be downloaded into me, I think I would want to be an operatic tenor and be able to sing arias like “Nessun dorma” for a living.

I think hearing the performances for the first time. I am so fortunate to have had three world-class performers and one world-class engineer make this recording. I wanted to give them space to be creative and to make their performances their own, so I stayed away from the sessions, other than to get them food or answer a question… so I didn’t really hear much of it until I got a rough edit from Andreas. I had heard them perform the music while we were at Avaloch, so I knew what they were capable of, but hearing what they got on tape… it was at another level. They brought out aspects of my pieces I didn’t know were there, and to hear the recordings was like hearing these pieces for the first time.

I am really proud of this album. These four pieces represent a lot of who I am as a composer and what I value as a musician and as an artist. It features two of my most significant collaborations—with my wife Holly, who is the pianist; and with Lee Upton, a colleague at Lafayette with whom I have written an opera. I am humbled by the amount of work, care, love, and energy Holly, Ann, Peter, and Andreas put into making my music work, and I am in awe of what they accomplished.

I don’t know if there is just one specific feeling… and if there were, I am not sure I’d say for fear that I would rob the listener of having her/his own connection with the music. I think this is powerful music, and what I would want for the listener is that the music would find a way to reach her/him in a unique, personal way. I hope everyone who hears it will feel something different. 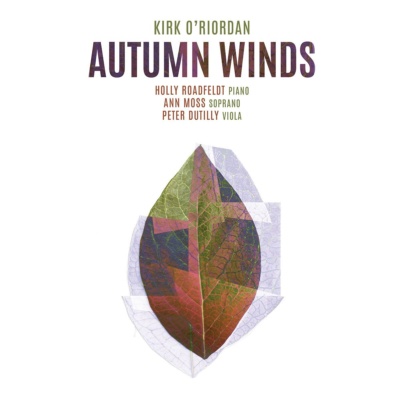 AUTUMN WINDS is now available to stream or purchase through Ravello Records. Click here to explore this new album.