THE INSIDE STORY: Juliana Hall and SPECTRA VOL. 2

American art song composer Juliana Hall is a prolific and highly-regarded composer of vocal music whose songs have been described as “brilliant” (Washington Post), “beguiling” (Times of London), and “the most genuinely moving music” (Boston Globe). Among her more than 50 song cycles and works of vocal chamber music are pieces for renowned countertenor Brian Asawa and star soprano Dawn Upshaw. SongFest awarded Juliana its 2017 Sorel Commission, and she was invited to be Guest Composer for the 2018 Fall Island Vocal Arts Seminar by artistic director and acclaimed mezzo soprano Stephanie Blythe, for whom Juliana has also composed songs. Juliana graduated from the Yale School of Music in 1987 (studying with Martin Bresnick, Leon Kirchner, and Frederic Rzewski) and completed her studies in Minnesota with Dominick Argento.
Since receiving a Guggenheim Fellowship in 1989, her music has been heard in 29 countries on six continents at venues including Weill Recital Hall at Carnegie Hall, the Library of Congress, and Wigmore Hall, as well as in concerts at the London Festival of American Music, the Ojai Music Festival, and the Tanglewood Music Center. Her music has been recorded on the Albany, MSR Classics, and Vienna Modern Masters labels and broadcast on the BBC and NPR radio networks. Her art songs and vocal chamber music are published by E. C. Schirmer and Boosey & Hawkes.

Today, Juliana is our featured artist in “The Inside Story,” a blog series exploring the inner workings and personalities of our artists. Read on to discover Juliana’s guilty pleasure after a long day of recording…

Arthur Rubinstein. My mom was a pianist, so I have never known a day in my life without music. She began teaching me piano when I was 6 years old, and of course we both looked to the great pianists as inspirations…and Rubinstein was at the top for us. My brother John knew how much I loved Rubinstein’s playing, so he went to the hotel where Rubinstein was staying during a concert tour in our area, and got an autograph for me.

I’m not sure there was ever a day when I didn’t want to be an artist. Growing up I wanted at various times to be a dancer, an actress, a singer, and a concert pianist. As a kid up through high school, I used to gather my friends together and put on “shows” and I even played the part of Snoopy in the musical You’re a Good Man, Charlie Brown at school.
Later when I was in graduate school at the Yale School of Music, I began taking private composition lessons, and when my teachers heard the songs I was writing they encouraged me to change my focus from piano performance to composition. I was 26 years old, so I felt like I hadn’t had much of the early preparation most composition students have…but within five years I earned my master’s degree from Yale, completed my formal studies with the great vocal composer Dominick Argento, was awarded a Guggenheim Fellowship, and received my first commissions – first a song cycle for star soprano Dawn Upshaw, and second a song cycle for Metropolitan Opera baritone David Malis.
I found when I discovered who I really wanted to be, everything seemed to fall into place.

The song cycle recorded on this new release, Bells and Grass, is a very small – almost delicate – set of five songs for soprano and oboe. The textures are spare and the musical gestures are subtle. The poet is the great Englishman, Walter de la Mare – a poet I’ve always been quite fond of, who writes with a very particular sense of color and vivid imagery. What I like about the five poems I set in Bells and Grass is the sense of wonder one can feel just by appreciating the small things in life: the sounds of a nightingale echoing through the woods, the glorious sun and whitecapped waves out at sea as a ship with sails glides by, the sense of melancholy and nostalgia created by a river in the moonlight, the sounds of coals burning in a fireplace on a rainy afternoon as twilight falls, and awakening in the middle of the night to the haunting sounds of rain in the darkness. These images capture the kind of tiny moments we all experience, and opens them up with clarity of description and intensity of emotion. I’d like to share these small, quiet moments with listeners, for they are moments of pure magic!

Television. Everyone says how bad television is, and it’s true there is so much junk on TV these days…but there is also so much really great storytelling. I love stories – whether it is a story in a poem, an opera, a play, a novel, or a great television program – so my guilty pleasure is spending my down time in front of the big screen watching favorite shows like Miss Marple and other British and Australian series’ like Poldark, Grantchester, Wolf Hall, Victoria, A Place to Call Home, Poirot, The Honorable Woman, Doctor Foster, Doc Martin, Are You Being Served?, The Catherine Tate Show, Yes Minister and Yes Prime Minister, Ballykissangel, The I.T. Crowd, Fawlty Towers, and The Paradise. Then there are so many wonderful British versions of stories by Charles Dickens, Henry James, Anthony Trollope, Anton Chekhov, George Eliot, Jane Austen, George Bernard Shaw, P.G. Wodehouse, Oscar Wilde, and of course, Shakespeare. After an intense day of composing songs, or practicing for performances of them, it’s so nice to take a deep breath and be entertained by a great story! 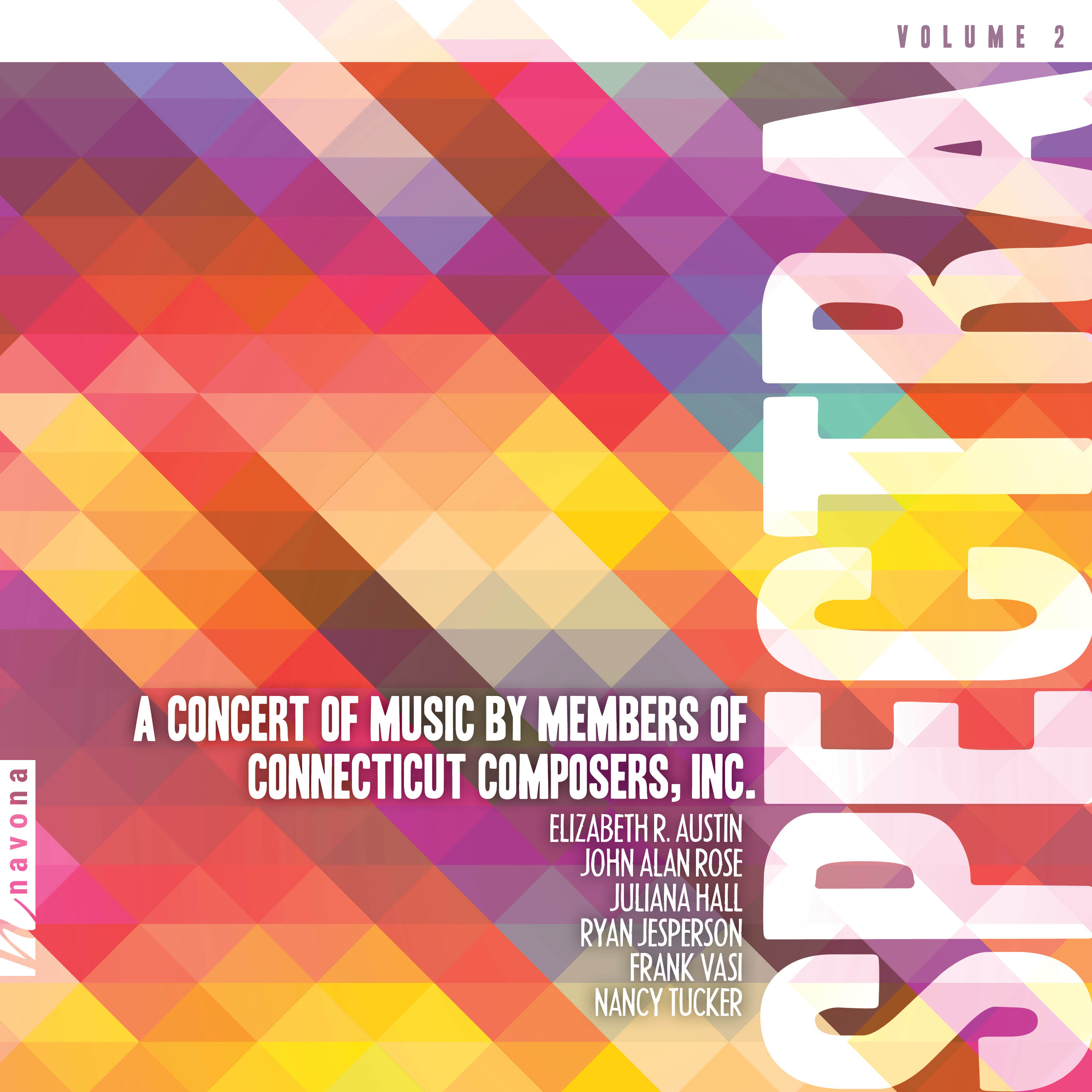 SPECTRA VOL. 2 will be available through Navona Records for streaming or purchase on October 12. Click here to pre-order.