The Inside Story: John McGuire and LINES AT DUSK

JOHN MCGUIRE has performed with many orchestras around the U.S. and has toured internationally with the acclaimed Fortress Brass Quintet, of which he is a founding member. John’s Navona Records album LINES AT DUSK showcases the hornist’s ability to enrich the works of a variety of composers with beautifully nuanced performances, as a solo performer, in a duo setting, and as a member of a brass quintet.

Today, John is our featured performer in “The Inside Story,” a blog series exploring the inner workings and personalities of our artists. Read on to discover what exactly made him say, “This. This is what I want to do with my life.”

My favorite artist growing up was Dale Clevenger, now former principal horn of the Chicago Symphony Orchestra. Several of his solo recordings were incredibly inspirational and influential for me, most notably the Britten Serenade. I also found his orchestral recordings to be almost other-worldly. To me, his performances on any of the Mahler symphonies is the gold-standard. Having later studied with him, I can tell you that his knowledge of the score, no matter the piece, is thorough and complete and thus his interpretations are all-encompassing. However, the best musical ideas are worth nothing unless you possess a great sound. And it was Dale’s tone that drew me in, gave me goose bumps, and opened my eyes to the sonic possibilities of the horn.

It was a singular moment that I will never forget. It remains as clear to me today as it was the instant it happened. I was a sophomore in high school and our school had a very good band program. We frequently traveled around the country to compete in various concert band competitions. This particular year we were performing a band arrangement of Respighi’s Roman Festivals. This piece is incredibly challenging even for high level professionals. We had worked on it for weeks, went to a festival in Cincinnati, I believe, and performed wonderfully. It was one of those rare moments when every person on stage was dialed in and focused intensely for the entire performance. At the end, as the audience started applauding, I distinctly remember sitting back in my chair, completely spent and exhausted, and thinking to myself, “This. This is what I want to do with my life.”

I would love to spend creative time in London, Vienna, or Cuba. When I was a student, I spent some time in London with some of the world’s great horn players, most notably Michael Thompson and Richard Watkins. I had the opportunity to hear them perform, record in the London studios, and teach at the Royal Academy of Music. The inspiration I drew from those experiences lasted years and I would love to replenish that well! Vienna is, I would imagine, a dream for most classical musicians. So much of our history and tradition comes from and around Vienna. For me personally, it is a place where some of my favorite composers (most notably Gustav Mahler and Wolfgang Amadeus Mozart) worked and lived. And lastly, Cuba because that is where my mother and her family immigrated from. For most of my life, it has been off-limits. Perhaps, though, I will have a chance to perform there at some point in my career!

I think it is not any one moment specifically, but rather an epiphany that I had about one of the works on it. Landscapes: Series II is somewhat programmatic. The first movement is about a Shinto pilgrim on a pilgrimage through the mountains, traversing treacherous paths, unsure footing, mists that obscure his vision, all as he travels to a shrine. The second movement is that same pilgrim sitting quietly beside a rice field in the light rain, observing only the quiet and stillness of his world, unaware of time or space. The third movement is about the pilgrim refusing to allow the demands of life to faze him, as he willfully and serenely floats above the chaos that life brings. The composer, Traci Mendel, told me several years after she had written this, and I had been performing it, that the pilgrim was me. I was dumbstruck! I just looked at her completely astonished. In that moment, the piece suddenly made even more sense to me, though I can’t explain how. To this day, I still feel like I learn something new about myself every time I pick it up.

This entire album is about everything in my life (musically and personally) up to this point. It is about reflection and introspection, looking back and inward, to help me understand how and why I am where I am. Doing this album is an attempt to learn and grow and move forward. Are there deeper meanings in the works? Absolutely. Will I reveal them? Probably not, at least not all of them. My hope is that in communicating the fact that everything on the album has a deep meaning, perhaps this could lead the listener to discover, derive their own meanings through their experiences with this music. To me, music expresses that which cannot be expressed through words, something inherently deeper and perhaps more profound. And this album typifies that, at least to this humble performer. 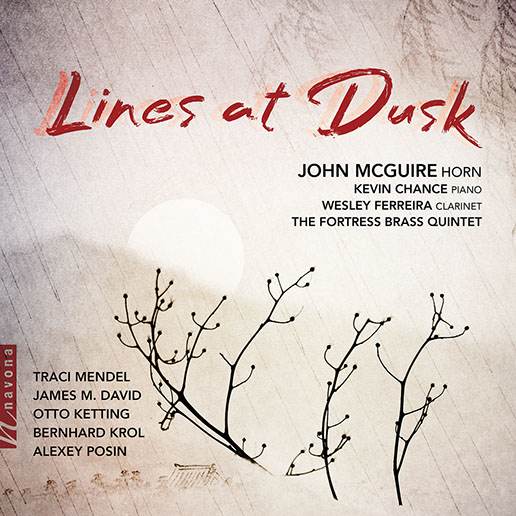 LINES AT DUSK is now available for streaming or purchase through Navona Records. Click here to explore this new album.