THE INSIDE STORY: Duo Beija-Flor and COSTAS

With their unique brand of ethno-classical music, Duo Beija-Flor presents a varied repertoire of works inspired by traditional and folkloric music from around the world. Guitarist Charles Hobson and flutist Marie-Noëlle Choquette began to perform together while in the midst of their graduate studies at Concordia University in Montreal. In 2010, they officially formed Duo Beija-Flor. Since then, they have performed concerts throughout Canada, the United States, and Argentina. Their first two albums, Muzica (2013) and Envol (2011), were released to much critical acclaim. Their unique combination of world and contemporary classical music has led the duo to be invited on several TV and radio programs (Radio-Canada, CIBL, Global TV, TVCK, Cogeco TV, etc.).
Hailed by San Francisco’s Flute Talk magazine as “…an incredibly dynamic and creative team,” the duo has arranged several pieces so as to create a more personal style. With the addition of their tireless research to find works from lesser known composers that follow the duo’s style, Duo Beija-Flor has created a classical flute and guitar duo that breaks the mold.
Today, the Duo is our featured artist in “The Inside Story,” a blog series exploring the inner workings and personalities of our artists. In this unique interview, the two artists give both individual responses and shared impressions on questions regarding their musical past and the experience of creating this album. Read on to learn about the rocky road Marie-Noëlle took to discovering her passion in music, and about the time Charles dislocated his kneecap in the middle of a show…

Charles: I grew up always drawing, reading, or playing music, but I never considered the arts to be a possible job. As a teenager, I started to realize that there were several avenues of making a living as an artist. First I wanted to be a band director, then I kicked around the idea of becoming a recording engineer. Later, I realized that I didn’t want to just show people how to play music or record others performing – I wanted to be the one doing the playing. Once I went to college, I started to really focus on becoming a guitarist, with the desire to become an artist.
Marie-Noëlle: I have always loved the arts and nature. I went on canoe trips every summer and took flute lessons and did arts and crafts during the school year. My first dream job was to be a geologist. I dreamed of a continuous camping trip finding beautiful rocks during the day and playing music in my tent at night. However, during an internship with a geologist, I understood that geologists spend most of their time in a lab looking into a microscope. It totally burst my bubble! After that my focus switched to music. It is the only thing I have continued since my childhood. I auditioned for college and soon discovered I was perfectly made for it.

Marie-Noëlle: Hah! A few years ago, we were performing for a prestigious concert series, and between two pieces I took a big sip of water. We started to play the next piece and I suddenly felt a bubble trying to come out. I did my best to keep it in, but during a breath, it just came out. Fortunately, I don’t think people in the audience heard it, but Charles asked me at the end of the concert, “did you burp?” and I had to admit that yeah, I burped in the middle of a piece!
Charles: My most embarrassing performance came during high school while playing in my rock band. We really liked to give a good show and did a lot of jumping around on stage. Well, one day while thrashing around I dislocated my knee cap! My tendons forced my leg to collapse and propelled me back into the drum set! My fall was so well timed with the end of a song that many people thought that it was part of the show. Needless to say, it wasn’t planned. I finished the show sitting in a chair and then went straight to the ER.

Marie-Noëlle: Nature is what inspires me the most. That being said, I would go anywhere where it is summer all year long! Somewhere where there are plenty of fresh fruits, beautiful landscapes, and water nearby to swim in!
Charles: Spain for me! I’d love to not only get away from our Canadian winters but also to dive into the heart of the guitar. It would be almost like a pilgrimage. To be in the presence of the guitar’s beginnings, where the great luthiers sculpted the first modern guitars; to walk the same streets and eat in the same cafés as composers like Isaac Albéniz, Enrique Granados, and Manuel de Falla to name a few, would be greatly inspiring.

Charles: For me, it was listening to the playback right after we recorded de Falla’s Siete Canciones Populares Españoles. I first heard the work while I was in my undergrad and I immediately fell in love with the piece. I must have listened to it a million times in the span of a year! When we started this project, it was a must to include it on the album. Once I got a chance to hear myself playing it, it was surreal!
Marie-Noëlle: I really enjoyed the whole recording process, but my favorite pieces on the album are the Summer Garden Suite, the two pieces by Piazzolla, Oblivion and Escualo, and Narcio Saul’s Boulevard San Jorge. I was also really excited to hear all of our arrangements that are on the album – it’s the first album where we have so many of them.

To us, it means the culmination of 5 years of hard work. We arranged a lot of the works for the album. We even traveled to Buenos Aires to polish our tango arrangements by bathing ourselves in the culture and by studying with two tango music masters. Beyond our arrangements, the album also features two pieces that had never been previously recorded. It can be quite intimidating but also exhilarating to be the first to record something, and this was the case for the piece that Roddy Ellias wrote for us, Havana Street Parade, and also the piece 4 Sephardic Songs by Sid Robinovitch. While the songs weren’t written for us, we were the first to record them in their entirety. Both composers have had positive reactions to hearing their pieces recorded and we can imagine that it is as much of a thrill for them as it is for us. All of this with the fact that it’s our first album with a label and distribution, COSTAS marks a real pivotal point for our duo and it is something that we will cherish for years.

We hope that we have communicated the immense pleasure that we had while recording the pieces, as well as their immense beauty. Also, in showcasing classical music with Latin roots from both sides of the Atlantic, we wanted to show that there is much more to Latin music than just the samba and flamenco. Those are great styles and you’ll find them on the album; however, there are so many great composers and styles to discover that we had a hard time deciding who and what to include on the CD. This album just touches the surface of what is out there! We’re hoping that it will push a few people to look into some of the lesser known styles.
We also wanted to show and share that classical music can be accessible to anyone! We did this by mixing new repertoire as well as employing a different approach to playing the standard repertoire. There is a lot of personality in our way of interpreting music, and we think that musicians should feel free to express music in the way that they feel it. We want to show performers that it is possible to have personality without having to sacrifice the composers’ intentions. 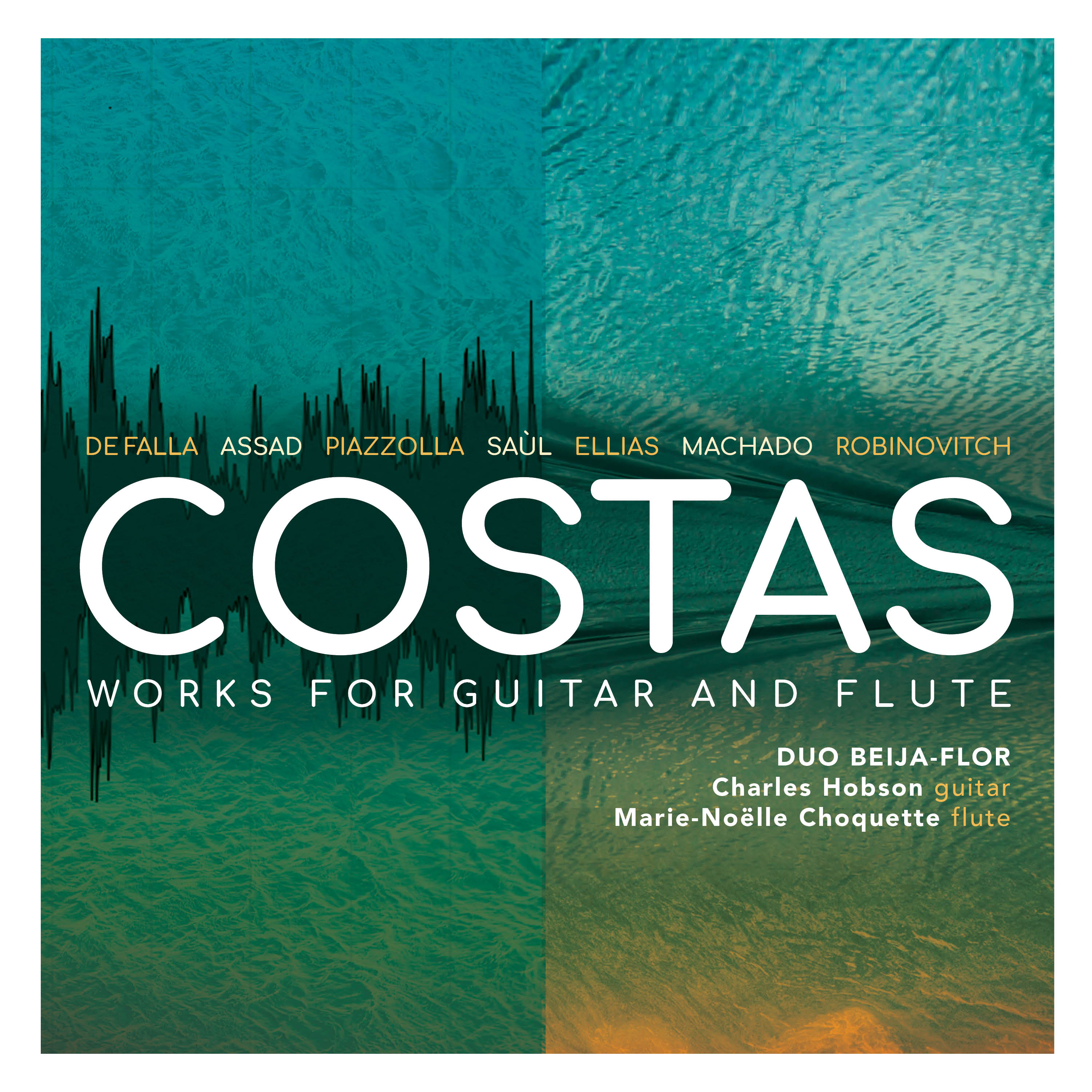 COSTAS is now available through Big Round Records for streaming or purchase. Click here to explore this new album.