Hevreh is a Hebrew word meaning: “Circle of Friends.” It’s a fitting name for the Hevreh Ensemble, a quartet formed from long standing friendships and mutual musical interests, whose distinctive sound has been embraced internationally. As the Hevreh Ensemble says, “good friendship makes for good music, and great stories.”

Joining us on the PARMA blog is the ensemble’s oboist Judith Dansker, who shares the story of “Path of Light”, a collaboration conjoining musical and visual mediums dedicated to Eastern Europe’s Jewish community. Read on to follow the Hevreh Ensemble’s journey through Poland’s museums and sites of significance, with anecdotes of cultural connection, and a memento from Dansker’s travels in which to indulge.

The Hevreh Ensemble first traveled to Eastern Europe in 2010 where we presented concerts for the Jewish Community of Prague at the magnificent Spanish Synagogue, and in Krakow for the Galicia Jewish Museum. The trip was wonderful; we had the opportunity to return to our roots and to explore our shared Jewish heritage. We hoped to be able to return to Eastern Europe at some point.

Then, in the spring of 2017, my husband Paul was listening to an NPR interview with the photographer Loli Kantor. She had just published a book called Beyond the Forest: Jewish Presence in Eastern Europe, 2004–2012.

The book features poignant photographs of Jewish people living in Eastern Europe, some elderly holocaust survivors, and others belonging to a flourishing new generation of young Jewish families. The National Yiddish Book Center in Amherst, Massachusetts was showing Kantor’s work in a special exhibition and we were fortunate to attend the show. We were very moved by her work; I decided to reach out to Kantor and a few weeks later we met in New York City. I was immediately drawn to her energy, sense of empathy, and intelligence. 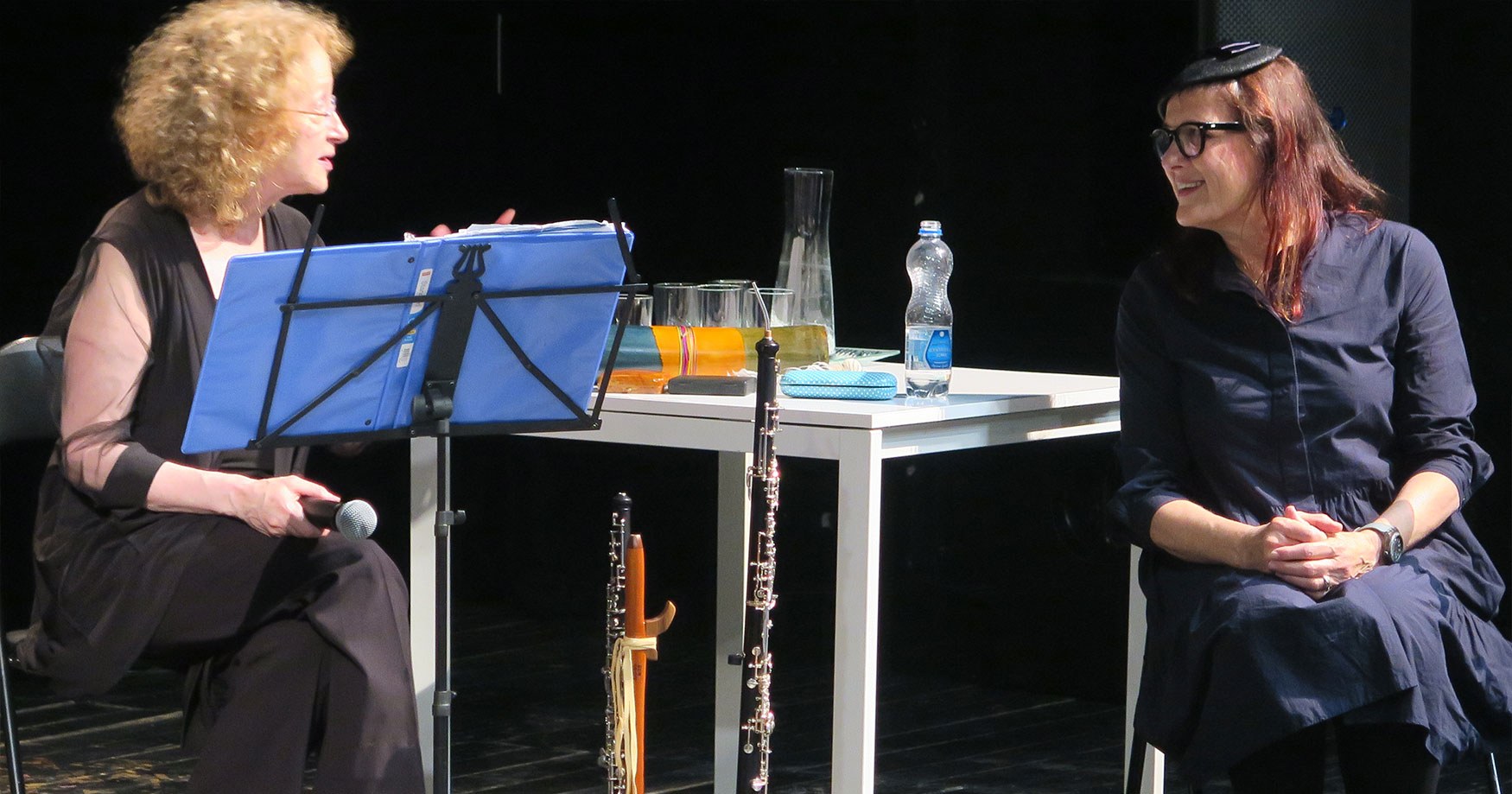 She told me that she also wanted to return to Eastern Europe and we quickly began to think about possible ways to collaborate together. It felt like I had found a kindred spirit with the same mantra: “reach for the sky and don’t stop pushing until you achieve your goal!” Ultimately, we reached the decision to make a video of her photographs that would accompany our music. Loli was set to embark on a trip to Poland with us, and would participate in post-concert Q&A sessions with the Hevreh Ensemble about her work.

We brainstormed venues that we thought would be appropriate for our project and both thought about The Jewish Culture Festival in Krakow Poland. Each year — for two weeks — the whole city of Krakow is filled with music in many different locations. One of the venues was the Galicia Museum. Hevreh had performed there in 2010 and Loli had always wanted to exhibit her work there.

A bit of serendipity occurred when we found out that the director of the Galicia Museum in Krakow was going to be in the United States for a fundraising trip that November, and he planned to be in New York. I met the young and dedicated director Jakub Nowakowski at a midtown Manhattan cafe. It was such a pleasure to meet Jakub and I excitedly listened as he told me about the latest additions to the museum. I asked him how the Jewish community was thriving in Krakow and he said it seemed to be healthy. We also talked about the new right wing government in Poland and we both commiserated about our current political situations. At the end of our meeting, we had picked a tentative date and decided to try for the summer of 2018. So the work began!

Over the next few months, with not a great deal of lead time, I reached out to several different venues in Poland. We were delighted to be invited to both a contemporary art museum in Lublin, Labirynt, and for the POLIN Music of Jewish History in Warsaw. We also quickly organized a few fundraising concerts and wrote travel grants. 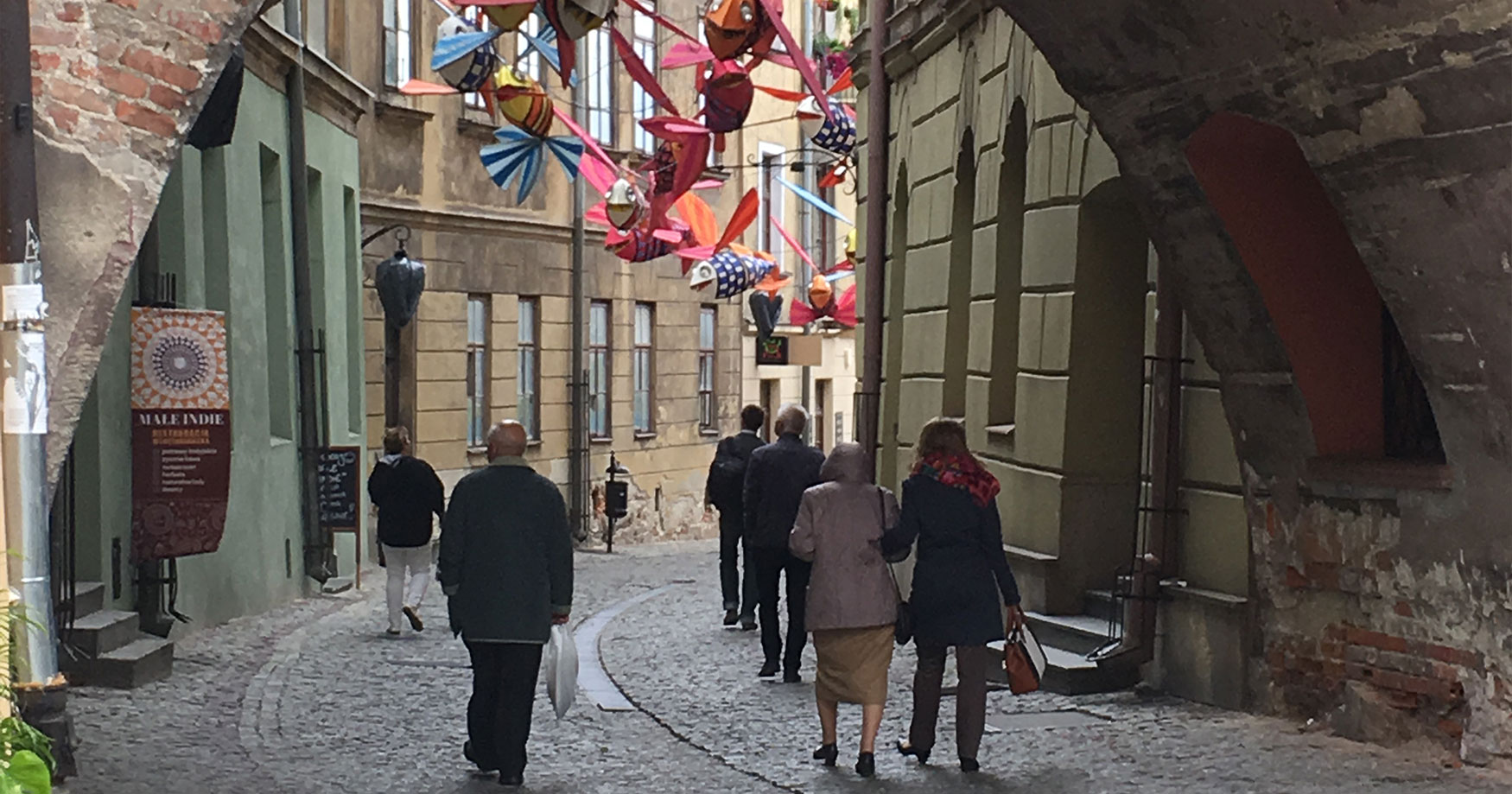 We arrived in Poland on June 26, 2018 for our first concert at the Jewish Culture Festival in Krakow. Having rented one large van for four Hevreh Ensemble members, Loli Kantor and her husband Scott, my husband Paul, our suitcases, and all of our instruments, we quickly realized that we were not all going to squeeze into the van! Loli and Scott bravely offered to take buses and public transportation to all of our venues and consequently had many missteps and adventures — their experiences would be the subject of another blog!

Krakow was busy with crowds of concert-goers from around the world and the streets were filled with an air of excitement and anticipation. Our concert was the next evening, so we had a chance to walk around Krakow. We peered into an ancient synagogue that was decorated with bright lights, and the sounds of jazzy and wildly energetic klezmer music streamed out onto the narrow streets.

We traveled to Lublin next, a beautiful small city about 2 and a half hours from Krakow. We presented our concert in a contemporary art museum called Labirynt. The edgy, state of the art collection was housed in an old Soviet-era battle scarred factory. 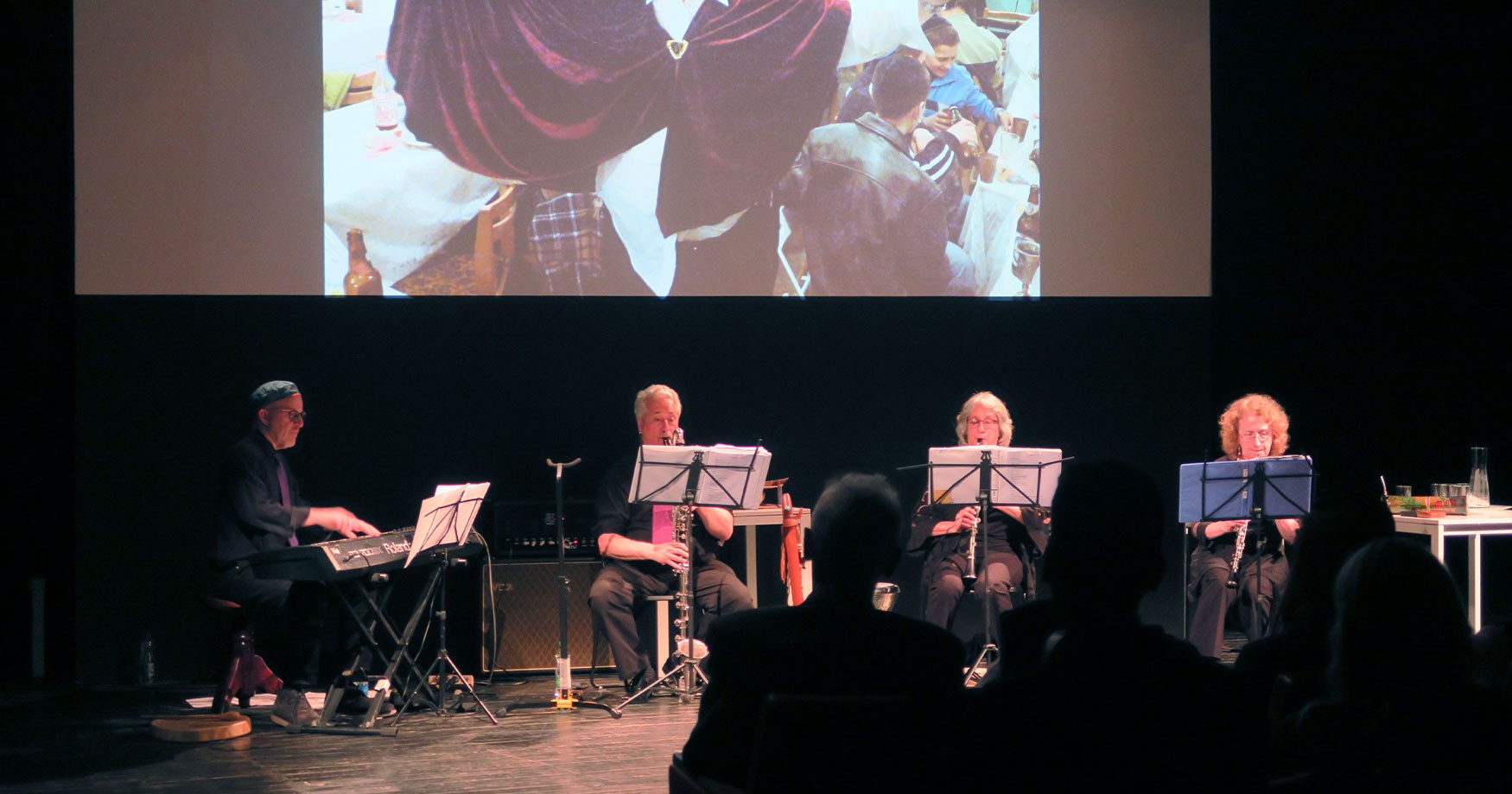 The NN Theatre is in Lublin and is housed in the Grodzka Gate, also known as the Jewish Gate. Historically, the gate was a passageway from the Christian to the Jewish part of the city.

While she was working on her book, Loli Kantor had become close with many of the people involved with the theatre, and a large group attended our concert. It was heartening to meet so many dedicated and intelligent people. After our concert, a few people went out with us and they suggested a local restaurant.

The restaurant was crowded and lively and people were singing along with a strolling accordionist playing Polish Folk Tunes. Laurie, our clarinetist, was filming a video of an accordionist. A more than slightly inebriated woman — thinking Laurie was taking her picture — roughly pushed the accordion player aside and came barreling after Laurie! The situation was deflated, no injuries to report!!

Our last concert was for the POLIN Museum of Jewish History. The museum was built in 2005 on the site of the old Warsaw ghetto. The stunning architecture of the contemporary building houses treasures from throughout Jewish history in Poland. The word “polin” is a Hebrew word that means “rest here.” It was a deep honor to perform a concert for the museum. 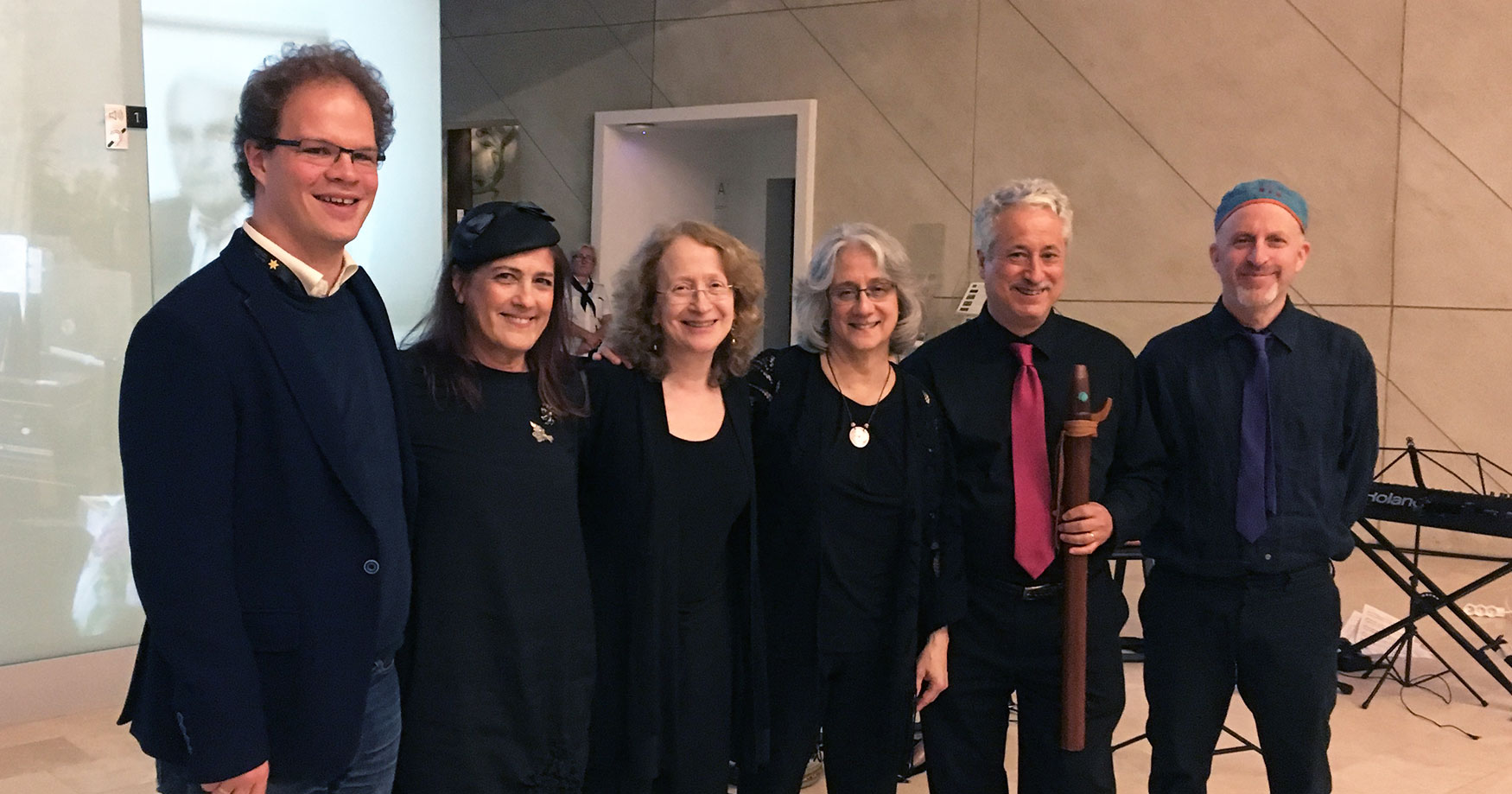 After the POLIN concert, I received a letter from the program director, Prochyra Kajetan that said: “I think your project touches the very core of our Museum: homecoming. Both privately and as a member of the staff of the Museum, I would like you to feel at home here. It’s your museum.”

When our concerts were finished, we had a free day to explore Warsaw. With my husband Paul, Laurie, and Jeff, we set out to find a section of the remaining Warsaw Ghetto Wall. After asking for directions and getting lost many times, we came upon a restored synagogue that had miraculously survived the war. Horrifically, it had been used as a horse stable by the Nazis.

After walking for a few more miles, we saw it! Straight ahead of us was the section of the ghetto wall in the middle of a residential neighborhood — quite a surreal moment! 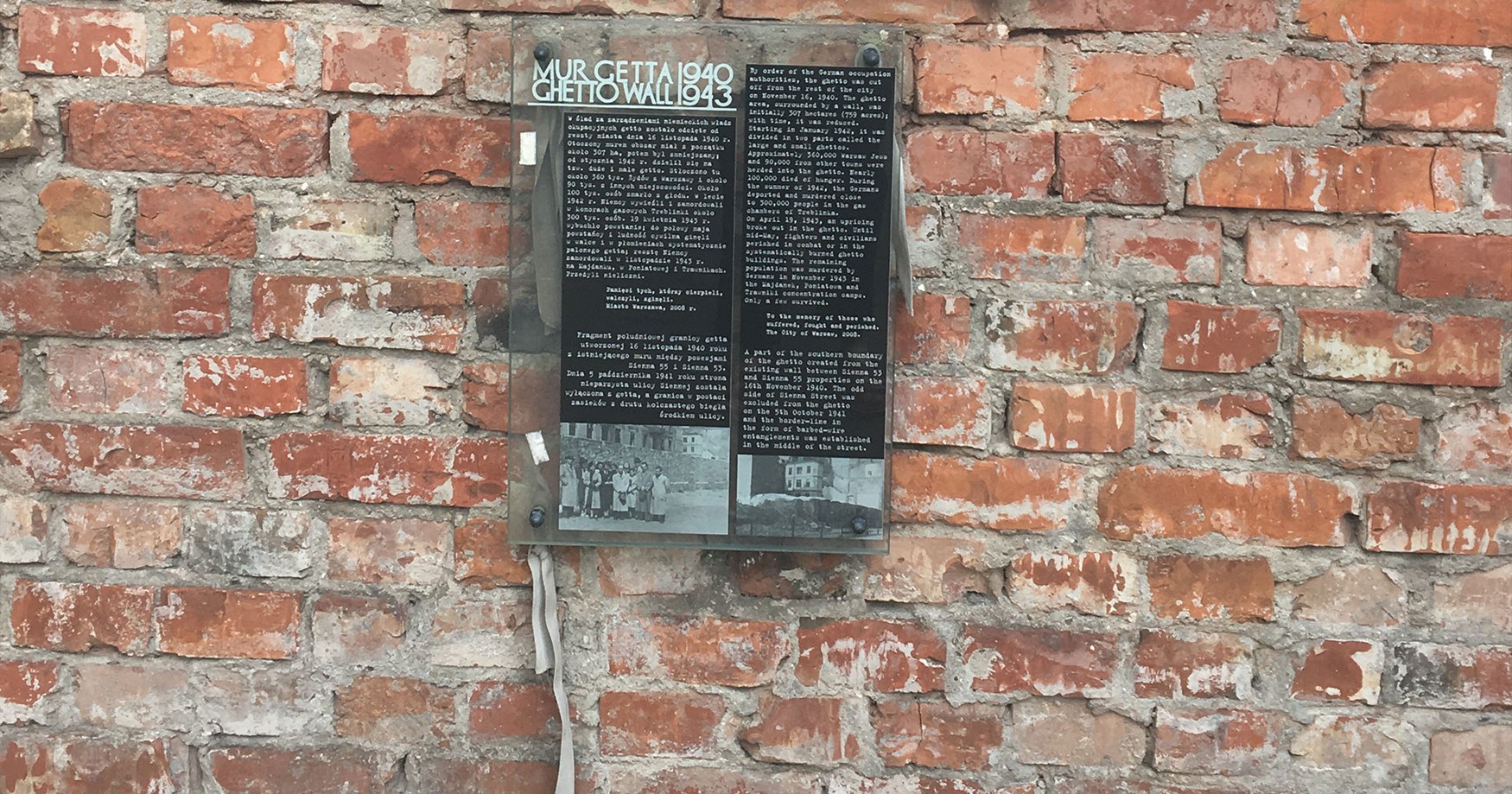 Laurie, who is a gifted and talented artist and carver, based her most recent sculpture on the emotions that she experienced during this day and impressions from the tour to Poland.

Looking back, the time there is remembered as a happy blur of concerts, navigating our van and a large amount of equipment and instruments that must be schlepped to the various venues, squeezing in a bit of sightseeing and many late night after-concert dinners that usually started around 9:30 or 10:00 in the evening. It was lovely to have the extra help from Loli Kantor and her husband Scott, and also my husband Paul, and it did feel a bit like a big week-long party. It is always wonderful to discover the local cuisine and cultures of the different countries that we have visited. The food in Poland was wonderful, but in many ways the food brought back poignant memories of dishes that our Eastern European relatives cooked when we were growing up. For Laurie, it brought up sweet memories of the excellent cold borscht that her grandmother made for her when she was a student at the Manhattan School of Music.

We happily ate platefuls of pierogies that were filled with sauerkraut, potatoes, and mushrooms, rich stews, and a delicious hot soup called Barszcz Czerwony (Red Beet Root Soup) that has mini meat filled pierogi. But it was the cold borscht that spoke most to Laurie and myself. One day we ate it for both lunch and dinner! At an excellent restaurant in Warsaw called Specjaly Regionalne, I had a chance to chat with the restaurant owner and he very kindly told me what ingredients they included in their version of cold borscht. Although, of course he stopped short and slyly smiled when he said there was a secret ingredient! 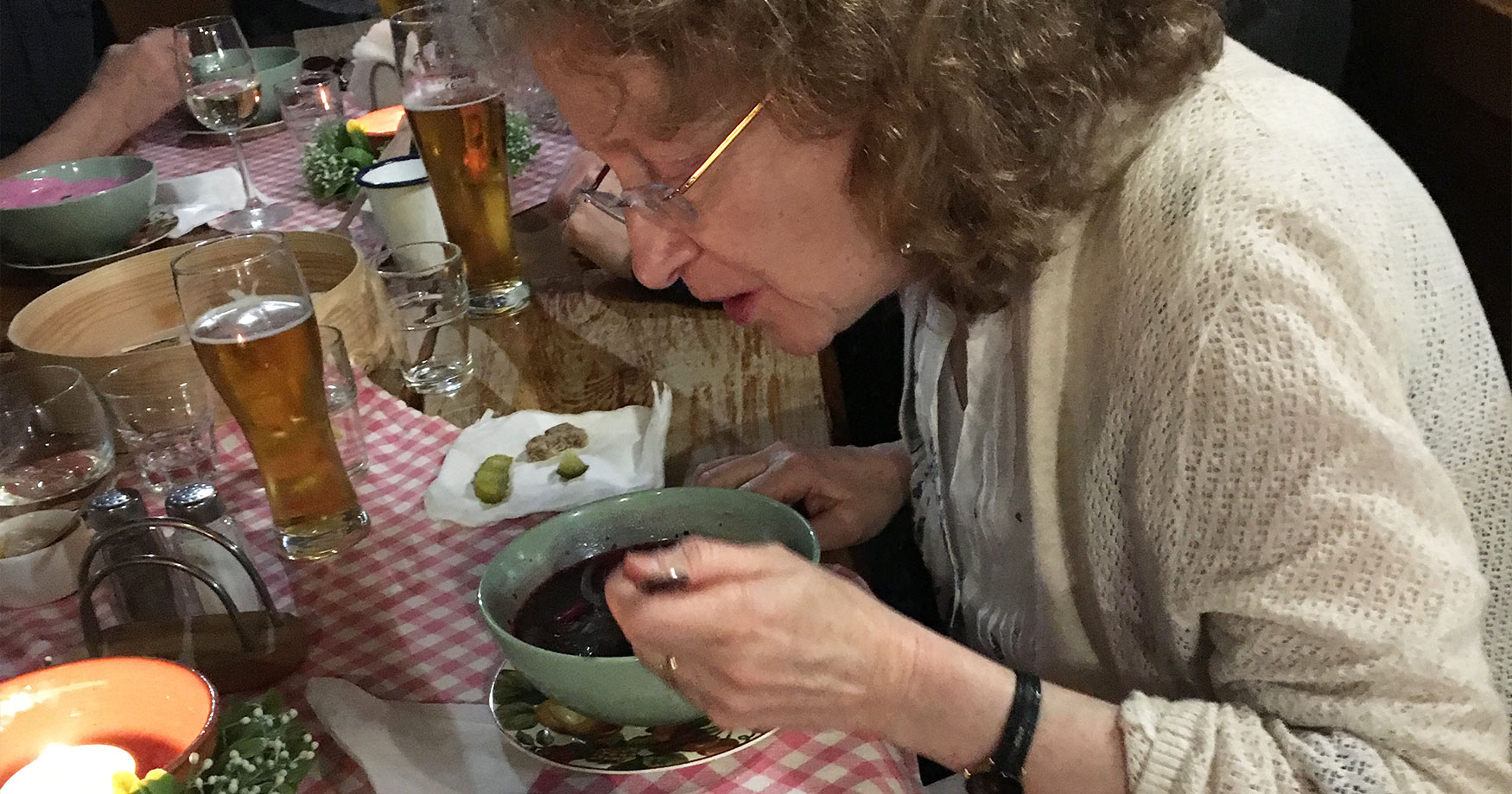 Judith enjoying cold borscht at a local restaurant in Poland

So, we came back home and Laurie and I both developed a serious craving for cold borscht. We decided to try to recreate the dish! I looked up many different recipes and Laurie tried to remember what her grandmother did. Anybody who knows Laurie well knows that she would much rather be carving or playing clarinet than cooking. But, the need for some authentic borscht seems to have awakened a blossoming cook. I personally see a promising future for further culinary delights!

This is what we came up with; it’s much better after it sits and marinates for a few days. I also plan to make a Russian Summer Beet Borscht that has many different ingredients than the Polish version we made. But, I think we need to do a bit more research and visit the Polish neighborhood in Greenpoint Brooklyn, and also to get a Russian perspective, we will need to visit Brighton Beach Brooklyn. More to follow!

Directions:
Scrub your beets well
Put in pot & cover with water
Bring to full boil, reduce heat to simmer, cover and cook until tender, but not mushy. This should take about 25-30 minutes.
Let beets cool in liquid completely
Peel your lovely beets and cut into small pieces or better yet grate then- put back in pot with beet broth
Peel Cucumber and grate or cut into small pieces
Cut 3 or 4 radishes into small pieces
Add Sweetener to taste and about 1 tsp salt and a good grind of fresh pepper.
Mix in yogurt, vinegar and sour cream
Put in the fridge and leave it alone!!! for 1 day!!
Then you can adjust salt and sweetener, yogurt and sour cream
Garnish with hard cooked egg, scallions or chives and a dollop of yogurt or sour cream
Enjoy!! 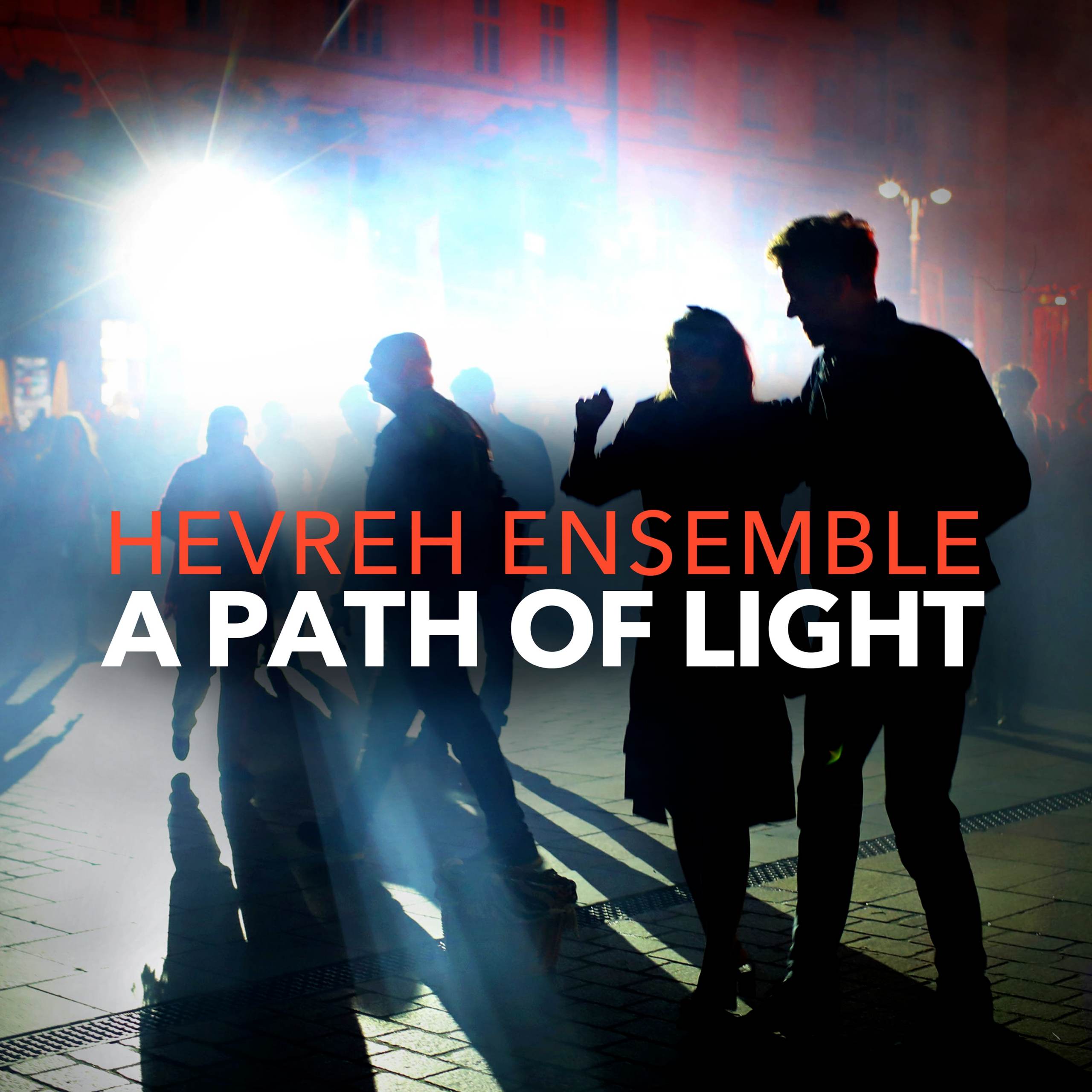 A PATH OF LIGHT