The Inside Story: John Winzenburg and Quotation of Queries

QUOTATION OF QUERIES features the students of Hong Kong Baptist University under the direction of Professor John Winzenburg. This collection of choral music explores notions of culture throughout the course of human civilization. It features traditional compositions, recent works, and three debut recordings by prominent composers from Hong Kong and the United Kingdom.

Today, John is our featured artist in “The Inside Story,” a blog series exploring the inner workings and personalities of our composers and performers. Read on to discover how teaching in Hong Kong has enabled him to continue his musical discourse between Western and Asian cultures.

The Cantoría experienced many exciting moments on the album, especially with the contemporary works: the shifting poetic moods of Chan Hing-Yan’s Quotation of Queries title tracks; the lyrical melodies in the Hong Kong vernacular in Chan Kai-Young’s Two Cantonese Works; and the lively rhythms of Ronaldo Miranda’s Suíte Nordestina.

For me, it was especially exciting to depict the dramatic tension of the final two tracks of John Browne’s The Suppliant Women in the studio with the percussion and aulos. The instruments and choir had to be placed at opposite ends of the large studio as we recorded together because of sound levels, yet we had to align ourselves sonically as if on stage. But the energy of “3rd Amoibaion” was immediately felt by everyone. And in “Exodus,” the choir of university students had to switch roles in a single breath from young girls to adults in order to capture the mature color of the Argos citizens. So perhaps my favorite musical moments on the album occur at those points of antagonism.

I’ve been engaged in dialogue between Asian and Western cultures for 35 years. I studied Mandarin during and after doing my Bachelor’s degree in East Asian Studies, all the while performing Western classical and popular music as a conductor, singer, and drummer. I’ve increasingly focused on East-West musical exchange in my research and performance work in Chinese music over the past 17 years.

While I’ve been part of projects and publications that incorporated different musical and textual languages, this is the first major recording project in which I and the HKBU student ensemble have been able to really focus on a counterpoint of choral cultures representing Hong Kong (through Cantonese singing and premieres by local composers), China (through Mandarin performance and ancient poetic texts), and various international traditions and eras, including ancient Greece (via contemporary Britain), Brazil, Germany, and France. The Cantoría and other Hong Kong choirs work in a unique multicultural set of languages, and I am forever both insider and outsider as I work with them. So in a way, this album represents my own cross-cultural journey, now wedded to the Hong Kong experience.

I think it’s a special, youthful versatility that Hong Kong students bring to the recording studio. In many ways, the Hong Kong worldview is still in flux, after 150 years as a British colony and now 23 years as a Special Administrative Region of China. Most of the student ensemble members were born after 1997, but they have grown up with a composite familiarity of Anglophone-Sinophone cultures that enables them to grasp local, national, and international languages as choristers from few other places can do. At the same time, Hong Kong undergraduate music students are equipped with very strong musical skills, giving them a unique potential for artistry and adaptability. It may not at first be apparent to Western or Asian listeners, but the ease with which our students are able to move from Mandarin, to Greek-inspired English, and then to German, French, Cantonese, and Portuguese – as well as the musical idioms those languages convey on this album – is a rather rare ability. We are not a professional ensemble, but I would hope that we have communicated a depth of our diverse yet universal human outlook with musical vigor.

As performers, we cherish our moments on stage, in the rehearsal hall, and in an increasing variety of performance contexts. Our singers have been thrilled to experience creative time over the past five years in an unusual series of spaces and projects: the unforgettable acoustic of the King’s College Chapel at Cambridge; the broadcast studio of BBC Radio 3; the choral theatre stage in collaboration with the Actors Touring Company and Royal Lyceum Theatre Edinburgh; and the recording hall of Studio 28 in Bangkok. As a university choral educator, these are all the types of settings that I would like to explore further with my students. The Quotation of Queries recording project was especially challenging for us, since it was the first time we’d embarked on a full album – over 70 musical minutes recorded over just five afternoons! While I would welcome the opportunity for a second recording project, my foremost interest is spending more creative time on the choral theatre stage in collaborative projects with international partners, where we can positively and artfully address contemporary issues of concern, especially in the growing environmental challenges that we face across the globe.

By far the most unusual performance was the commissioned, multimedia cantata Hong Kong Odyssey, for which the Cantoría performed as the main choir at the 2017 Hong Kong Arts Festival. It was a challenging production that brought together various Hong Kong composers, authors, directors, choreographers, videographers, instrumentalists, vocals soloists, and choirs. In an unusual setting, due to the video clips being projected on screens behind stage throughout the two-hour production, the orchestra was seated on stage, and the Cantoría performed from the orchestra pit in front of stage. The pit was extremely tight, and only our heads were visible to the audience. Due to the spatial layout, I had to stand in the pit immediately behind the orchestral conductor, who was up on stage with his back to me. In order to synchronize the orchestra and choir, I had to follow his gestures and synchronize my beat patterns with his beat patterns as he conducted, as our singers turned in toward me and sang in long rows all the way down to the end of the pit. Through multiple performances, we were able to overcome the challenges, but the tension of the premiere performance in front of 1,300 spectators was high, even for an already tense conductor’s role.

I’ve always known that I would be involved in the arts. I performed in musical theatre my whole life from the time I was five, sang solos throughout elementary and high school, drummed with rock bands for decades, and performed with choirs, orchestras, and wind bands as vocalist, percussionist, and conductor. However, I made the choice to become an artist-academic in two stages: first when I fell in love with the liberal arts as a university student; and later when I felt compelled to connect my interest in research, writing, and teaching with my lifelong passion for music, text, and drama. This realization came when I’d lived in Asia for eight years after getting my Bachelor’s degree. I first wanted to study Mandarin Chinese and Japanese while I gained work experience as a translator, journalist, and in business – all the while performing popular music. But when I entered my early 30s, I felt a great need to focus back on classical music, and my background in Asia would provide a great impetus for merging my research, teaching, and performance interests. In a way, QUOTATION OF QUERIES captures the essence of all three roles as faculty-conductor-researcher. The album is research driven as creative practice, centering on the curricular university ensemble for artistic performance. So the realization to become this certain type of artist unfolded over time, experience, and cross-cultural exploration. 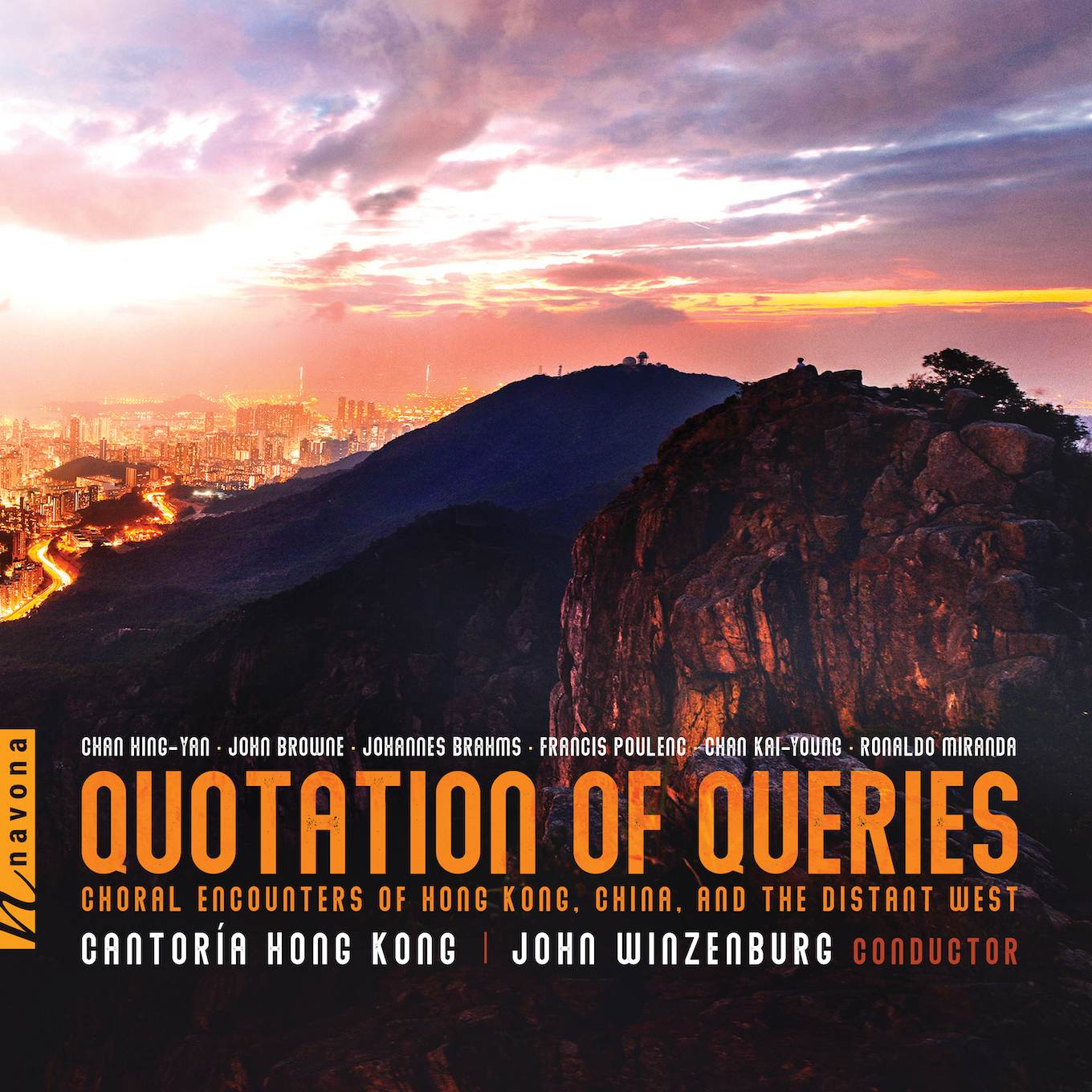 QUOTATION OF QUERIES from John Winzenburg and Cantoría Hong Kong is available now from Navona Records. Click here to visit the catalog page and explore this album.