Navona presents WINDOW PANES, a cross section of works by compositional veteran Elizabeth R. Austin. The collection is the first to comprise a lifetime of the American’s works into one album: and as the title insinuates, it is an album full of interwoven associations, subconscious reminiscences and intense melodic reflections, with decades of labor condensed into an hour of listening.

Today, Elizabeth is our featured artist in “The Inside Story,” a blog series exploring the inner workings and personalities of our composers and performers. Read on to discover how Elizabeth rekindled her relationship with composing after motherhood…

The German baritone Dietrich Fischer-Dieskau remains a seminal influence on my passion for a beautiful, unusual, and flowing melody line. As a child, I heard Fischer-Dieskau in person in Baltimore’s Lyric Theater. I felt the force of sheer, direct singing – to me, I imagined in my seat – to me!

Years later, when the notable Berlin baritone, Wolfram Tessmer, had sung my Lithuanian Lieder (Litauische Lieder) in Rheinsberg, Brandenburg, Germany, I wrote a letter of recommendation on his behalf for study with the inimitable Fischer-Dieskau. Soon afterwards, the great artist sent me a handwritten note, “…I felt attracted to read and hear your music.” He stated that he would personally recommend it. He regretted that he himself did not perform any more.

I never identified myself as an artist, until my late forties! I grew up in the forties and fifties in a middle class row house neighborhood, when a girl’s future was practically prescribed: acquire a college education, meet a future husband, move to suburbia and raise a family.

After my studies with Nadia Boulanger, courtesy of a scholarship she awarded me after she had heard Drei Rilke Lieder (on this CD), and my subsequent graduation, I remained at home and taught public school music in the Baltimore inner city schools. It was during that year that my friendship with a Johns Hopkins engineering student led to our marriage. Ten months after our wedding, I gave birth to twins! I hung my Phi Beta Kappa key above the sink, rolled up my sleeves, and prepared bottled baby formula!

My daughter became very ill with life threatening asthma, which was gradually manageable by her early teens. During the entire duration of our marriage, my attempts to compose fell short: I was more attuned to listening to poor Susan’s wheezing down the hall than to my musical imagination.

I soon realized that writing music was an indispensable part of my life. Restless and unsettled, I realized that an artist agonizes if even one day goes by without attention being paid to one’s art. My marriage went under and this recognition of ‘artistic commitment’ was no small part of its failure.

I did not call myself “an artist” lightly but I could no longer repress what I could not live without.

Without hesitation, I would dearly love to return to The Rockefeller Foundation’s Bellagio Center on Lake Como, Italy. Just as 9/11 was happening, I was flying to a residency in Bellagio, where I had the entire day to write music, secluded in the composers studio on the grounds. To be in the global company of many interdisciplinary scholars was so inspiring.

Since a return trip to this haven is probably not possible, I would feel equally nourished by living in Mannheim, Germany, where my husband and I spent every other academic semester in the nineties. My relationship with the Musikhochschule Mannheim/Heidelberg enabled me to use practice rooms, library, and recording studio in return for occasional lectures. Three portrait concerts were sponsored by this conservatory, in conjunction with GEDOK Mannheim (Association of Women Composers). The Music Section of Mannheim’s Municipal Library was directed by Brigitte Höft, who became a beloved friend and supporter. Much of my music is located there. Through bonds of friendship with outstanding performers such as Leipzig’s Ulrich Urban (on this CD), I enjoyed many concerts throughout Germany.

What was your favorite musical moment on this album?

I must admit to taking a shining to the climax of Symphony #1 ‘Wilderness’, where the Sandburg verse enters: “and I got something else: it is a man-child heart, a woman-child heart: it is father and mother and lover….” The entire motley collection in this psychological menagerie of animals comes to a head as the poetic distinction between wild beast and human being is the point of arrival.

Throughout the entire tone poem, the heartbeat motive (Maj. 3 – min. 2) is foreshadowed. Before the appearance of ‘the man-child heart…’, there is a recall of all the animalistic themes in varying order of appearance, a coda about 2/3 through the score (Golden Mean!). There is, then, a preparation for the grand distinction of the human heart.

The title of this album, WINDOW PANES, is actually a double entendre. Just as most of the music you hear is akin to peering out of a window into an appearance of past musical landscapes, ones with differing harmonic styles and traditions, but intertwined with my contemporary language, so the retrospective of my past life’s output is present on this CD. With an almost reverential attitude toward art and the maturing power of self-criticism and self-control, it was tough to include certain performances without choosing others. The Rilke Songs were written when I was 18, the final Puzzle Prelude was commissioned ten years ago! The merging of past and present in the listener’s sensibility reflects the classical persuasion: the idea of enduring.

I hope that you feel ALIVE when you listen: like a big exclamation point! I hope that the music conjures up images and feelings inside you as a responsive individual, one who is brave and curious enough to listen to today’s music. My musical quotes are homages as much as form-defining elements, but directness of expression is also apparently considered American! I hope you, who seek the beautiful, find beauty in this fabric. I use ‘radical tonality’ to explore beauty’s rapture, regret, and nostalgia.

Since I am also both composer and listener, one and double, I leave you, my audience, with a poem by Goethe: Ginkgo Biloba (the botanical leaf whose split grows together into one whole as it matures). We are indeed ‘two, who chose each other’!:

This tree’s leaf, that grows entrusted
To my garden, from The East,
Yields its secrets that delight us,
As it pleases those who know.
Is it living just as one,
Separate within itself?
Are there two, who chose each other,
So that they are known as one?
In reply to all these questions,
I have found the meaning true:
Don’t you feel, in all my singing,
That I’m one and double too? 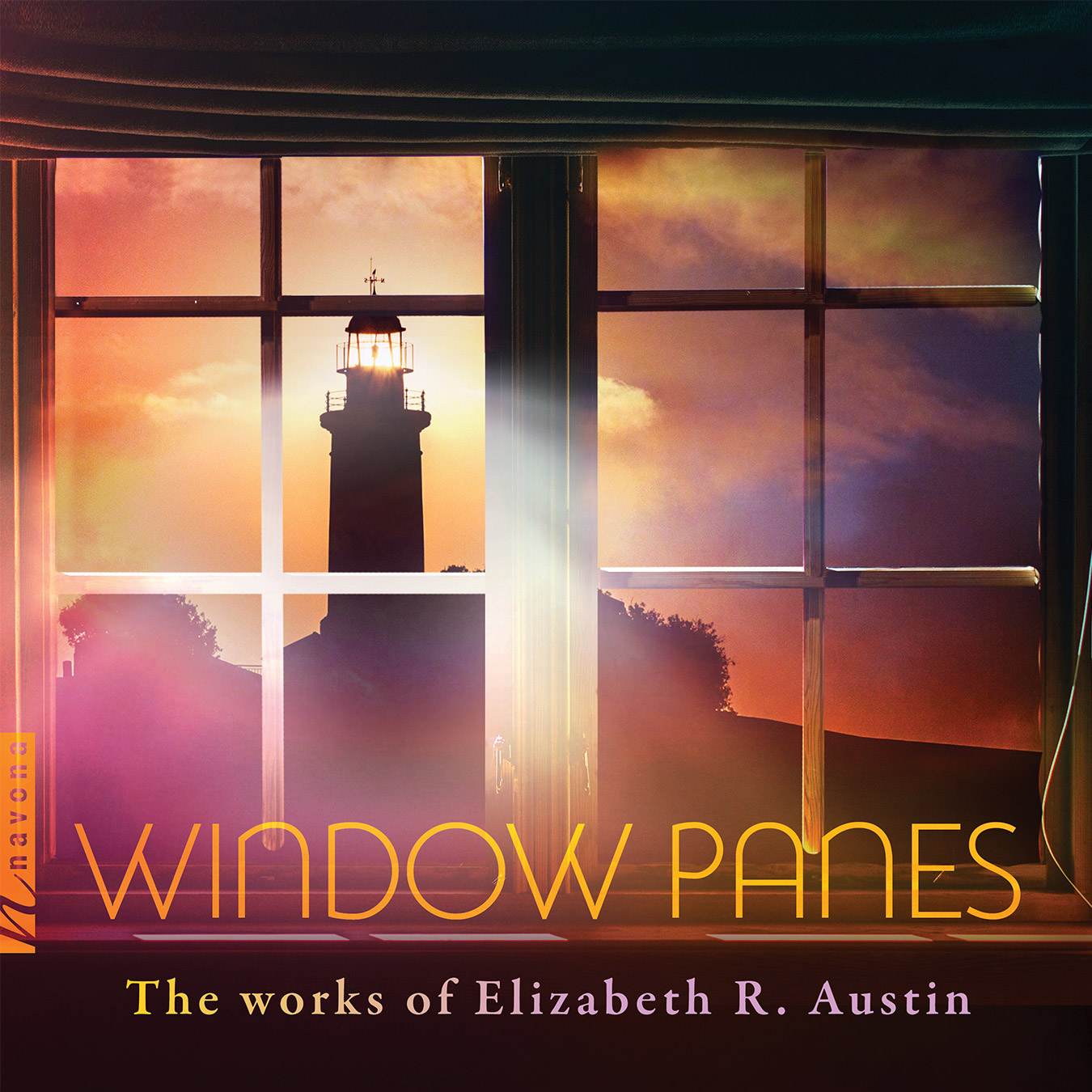 Navona presents WINDOW PANES, a cross section of works by compositional veteran Elizabeth R. Austin. The collection is the first to comprise a lifetime of the American’s works into one album: and as the title insinuates, it is an album full of interwoven associations, subconscious reminiscences and intense melodic reflections, with decades of labor condensed into an hour of listening.