The Inside Story: Demondrae Thurman and SOUND & LIGHT

On SOUND AND LIGHT, Demondrae Thurman wields the euphonium to further expand its repertoire and cement its graceful power into the minds of composers of solos and orchestral works alike. Playing works written by five close friends, Thurman wholly dedicates himself to unlocking the musical mysteries of every measure and fully exploring the instrument’s potential.

Today, Demondrae is our featured artist in “The Inside Story,” a blog series exploring the inner workings and personalities of our composers and performers. Read on to learn about his early years as a neighborhood beatboxer, and the decision that led him to pursue a career in music…

In my youth, I was a serious hip-hop head. All of the music that I consumed from age four until I got to high school was hip-hop or R&B. There were two groups that I really enjoyed. One was a group called Houdini and the other was called The Fat Boys. Houdini was an early 80s group that had an awesome mix of psychedelic flavors with 80s synthesizers. The Fat Boys were a super entertaining group that used self-deprecation style humor in their raps and the DJ was also an incredible beatboxer. I was the neighborhood beatboxer throughout my youth! Because of my love of making beats, I wanted to be a drummer when I joined the band. Apartment living didn’t provide me that opportunity. I’ll get to it someday.

I realized I wanted to be a musician when I was a senior in high school. Throughout my whole time in grade school, I was planning to go to college and study electrical engineering. After having a discussion with the engineering department where they told me I wouldn’t be able to do extracurriculars like marching band, I realized that I couldn’t imagine a life without making music. I had already fallen in love with music but wasn’t aware of that until that moment. The thought of having it taken away from me didn’t resonate well at all.

This might not be the direction that you’d hope to go with this question, but my most embarrassing moment in a concert was my senior year in high school. It was the final band concert that I was to play as a high school student, and we were playing an arrangement of Phantom of the Opera. Mr. Brannan, my band director, had just finished giving out the band awards and we were set to play our final piece. After a brief musical introduction, I was set to play a euphonium solo and for the life of me couldn’t remember how my first note sounded. So, I looked at Mr. Brannan with what must have been the most frightened look and commenced to butcher the first note of my solo. I told him after the concert that for some odd reason, I couldn’t hear the music that I was to play in my head. At that point, he laughed and said, “Having perfect pitch must be awful!” It was at that moment that I realized that I had a special ability to hear everything that I could play prior to playing it.

My guilty pleasure is watching sports! Football, Basketball, and Boxing are sports that I could watch at all levels. Watching the University of Alabama football team might be the most important thing I do on any given Saturday. I also enjoy modern new school hip-hop and rap. I could listen to almost anything by Drake, Lil Wayne, and Lil Baby. Such great wordsmiths with amazing rhythmic vitality!

If I could instantly play another instrument besides euphonium and trombone, I’d play cello. There’s something about the physical connection to and size of the cello that I think I’d enjoy. The concerto repertoire for cello, in particular, seems to bring out a certain vulnerability of composers in comparison to their other works. That’s the kind of music I gravitate towards on the euphonium and when composers write for me; they tend to display the same kind of vulnerability.

This album is personal to me on so many levels. For one, I have or have had a very close relationship professionally and personally with each composer represented. They have all impacted my life in a profound way and it’s my honor to present the music that they either wrote for me or conceived with me in mind. As a euphonium player, we tend to gravitate towards music of an overtly virtuosic nature, whereas the music on this recording is certainly virtuosic but in a much more abstract way. If the euphonium had a sonata repertoire in the way that we think of that in classical music, this recording would be a sonata album. Lastly, I recorded this album at the Indiana University Jacobs School of Music with Kathryn Fouse who was my boss at Samford. Teaching euphonium and chamber music at Indiana University represents my dream job and If I hadn’t met Kathryn, I’m not sure I would have ended up there. She helped me gain the last bit of confidence I needed to know that my work as a music teacher and performer was worthwhile. I’ll always be grateful to her for that. 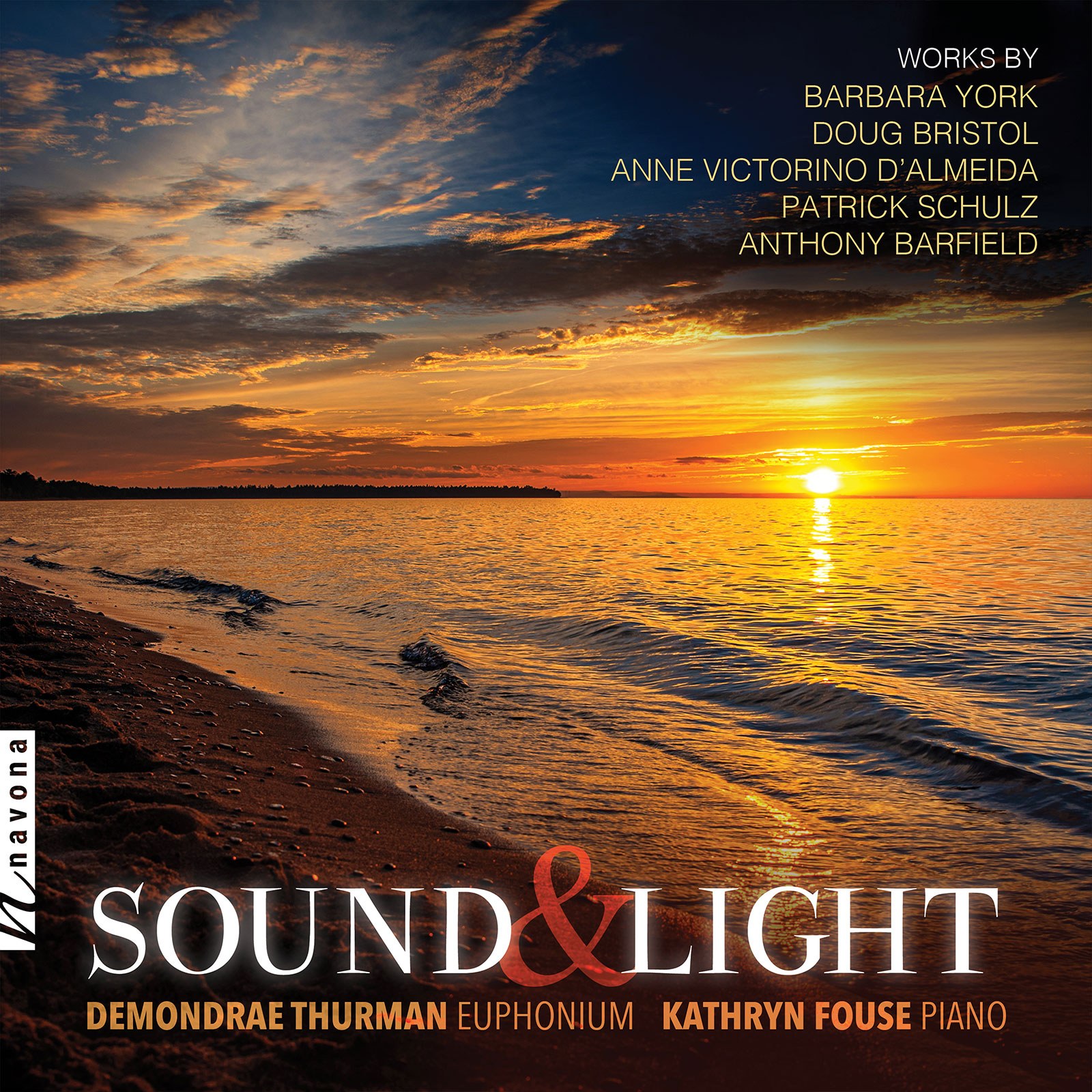 SOUND & LIGHT is available now from Navona Records. Click here to visit the catalog page and explore this album.