The Inside Story: Brian Belet and BRASS TACKS

Today, Brian is our featured artist in “The Inside Story,” a blog series exploring the inner workings and personalities of our composers and performers. Read on to learn how his early knack for sight reading gave way to a full blown music career, and why peace and solitude are the most important ingredients to his compositional process…

The Beatles are clearly an early influence for me. Along with my three brothers I saw The Beatles’ two U.S. debut performances on The Ed Sullivan Show. I was 9 years old, taking piano lessons and already deeply interested in music. Their television performances mark a clear “before and after” moment in my musical development. They did not sound like any early rock & roll we were hearing at the time, and they continued to defy convention thereafter. As the 1960s decade continued, I learned to distinguish the composing and performing skills of John, Paul, George, and Ringo, and my appreciation and respect for their musical talents only increased. In those days we did not know the details of their various personal turmoils, so they were just The Beatles to me, unified yet individual at the same time. To this day I still enjoy hearing their many unexpected compositional decisions, whether in terms of chord changes, vocal harmony, meter shifts, or “middle eight” bridge sections (some of the best in all pop music, ever). Their musical influence remains with me to this day.

Very early on, perhaps in second or third grade. My piano teacher included sight reading in every lesson, and it was great fun. I was rather good at this, and I realized that maybe I could actually pursue music as a career. Around this time I first became interested in composing, as I was fascinated with how music was put together. Something deep inside the music spoke to me, and I knew that I wanted to join that mysterious world of sound.

This dream actually became my reality: a university professor of music. In the absence of the Baroque and early Classical patronage system, landing a full-time tenured university gig was the next best thing. I basically traded my time and knowledge teaching students music theory, composition, and computer music for some amount of time and a barely livable salary to be able to compose the music I wanted to write and hear. The occasional funded sabbatical was an added bonus. I retired from academia in 2020, and am very happy to now have time and energy to compose as much (or as little) as I want, but without the teaching and administrative duties tacked on. So, I am really living my dream job now!

This is an odd question, since I really don’t need to be anywhere to compose. All I need is time and quiet to concentrate, and I can (and do) pursue this in many places. One of my favorite settings for composing is long airplane flights. Removed from the possibility of telephone or email interruptions, with several hours high above the clouds watching the world go by (so a window seat is grand for this), and with the occasional gin & tonic in hand, I find peace and solitude ideal for composing. My hand-written drafts regularly contain date and location notes, and I find flight data annotated on many scores. Back on terra firma, there actually are two places that beckon me to return: Mürren, in the Bernese Highlands of the Swiss Alps, and Venice, Italy. I would enjoy spending the full summer season in Mürren, hiking high alpine meadows and then composing while looking upon the Eiger and its companions. I would then enjoy the Autumn and Winter in Venice and its neighboring islands, letting its unique water-based world infuse my composing. Frequent visits to St. Mark’s Cathedral would remind me of the importance of healthy resistance to external artistic authority.

Viola, definitely. I play many string instruments reasonably well: violin, viola, cello, double bass, guitar, electric bass, and sitar, in addition to piano. With composing as my primary musical pursuit, playing this many instruments results in a definite diffusion of proper attention to any one instrument. So, in another lifetime, or by means of some other magic, I would really like to be a top-level violist. And, I really would not want to have instant expertise with the instrument; rather, I want to have the time to pursue the many years of practice required to attain that level. The process and the journey are really the fun part, just like with composing.

My initial answer to this is “No,” as most of my music is not about anything. It is music for the sake of music. However, each of the three movements of this brass quintet have direct references to composers who have had a strong influence on me for many years. The fugal first movement references Bach and Bartok, the second set of questions is for Ives, and the final movement references Machaut and Crumb. That’s an eclectic grouping of composers (a conjunction of composers, in my own collection of group names), but such is the advantage of having scores, recordings, and live performances of music by all of them. So, while I am not really concerned with communicating any specific feelings with this music, I would like the audience to know some of the music from these composers so that my respectful references have a chance of holding their own. One aspect that I would like listeners to hear in this recording is just how good the performers are. This quintet has some difficult passages, and the Janáček Philharmonic Ostrava Brass Quintet performed the score with skill and ease. I hope that the excitement of their performance is contagious to the audience. 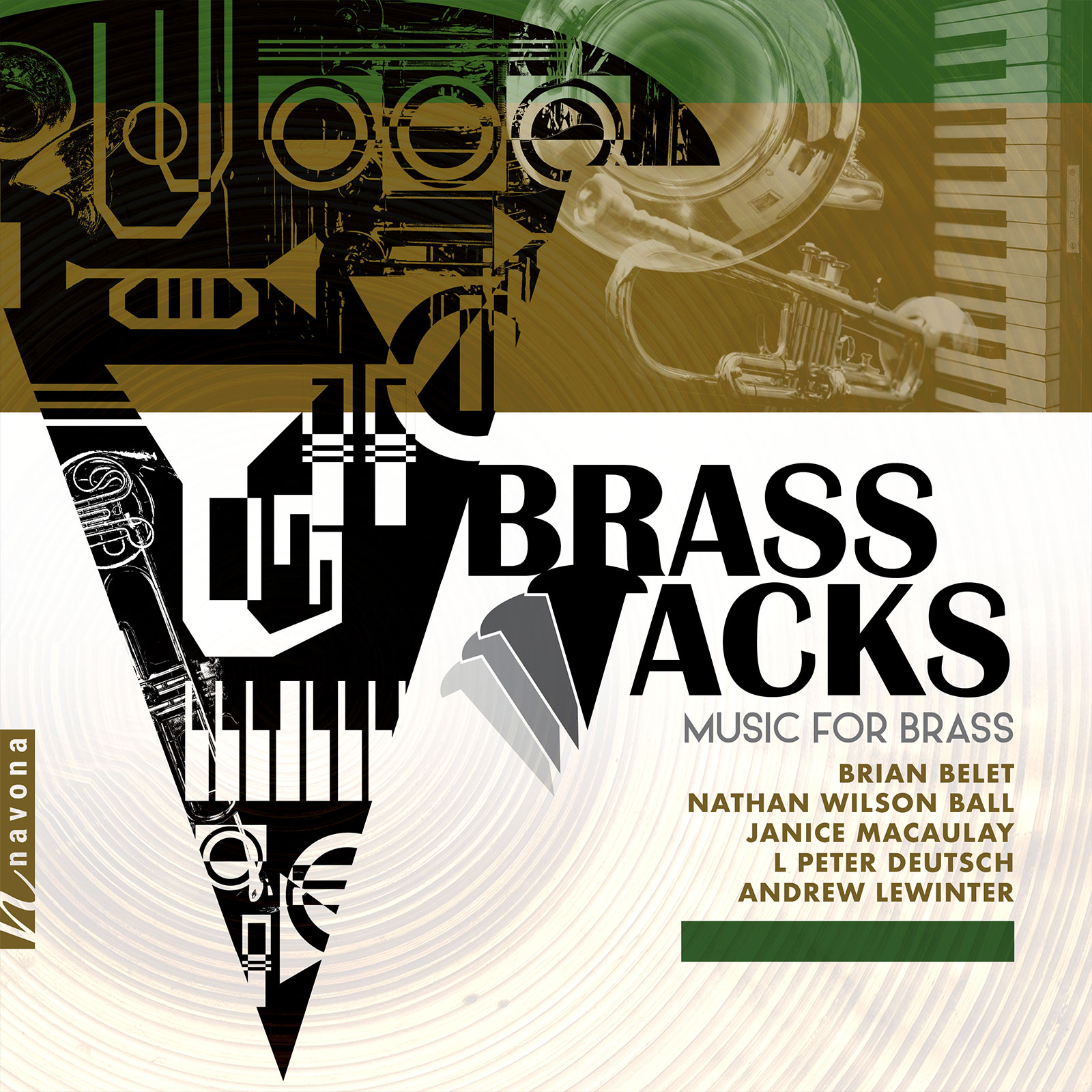 BRASS TACKS from Brian Belet is available now from Navona Records. Click here to visit the catalog page and explore this album.