The Inside Story: Andy Teirstein and RESTLESS NATION

RESTLESS NATION: THE MUSIC OF ANDY TEIRSTEIN celebrates the composer’s diverse and compelling work. This new collection takes inspiration from the composer’s many travels directing the global initiative Translucent Borders, with musical influences from Bedouin singing, Scandinavian folk music, and his roots as a folk fiddle and banjo player.

Today, Andy is our featured artist in “The Inside Story,” a blog series exploring the inner workings and personalities of our composers and performers. Read on to learn how a cross-country homeschooling trip gave way to his Restless Nation string quartet, and how he discovered the series of letters that inspired his piece, Letter from Woody…

In the past, you’ve performed with both Pete Seeger and Paul Simon. What was it like to share a stage with them?

It was always a pleasure to perform with Pete Seeger; his approach to music was inquisitive and down-to-earth, never belying the well-researched sophistication of the craft that went into it, much like his stepmother Ruth Crawford Seeger in the classical world. I was fortunate to play with him every year at the Clearwater Festival and at the annual reunion of the Abraham Lincoln Brigade. Pete was one of the great American musical storytellers, and this affected everyone onstage with him. Performing with Paul Simon was a rare privilege. It was a surreal experience to find myself improvising viola and harmonica parts to music I had grown up revering, the sound score of my teen years.

Could you tell us a bit more about your program Translucent Borders. How did it come about?

I’m a professor at the New York University’s Tisch School of the Arts. NYU has campuses in thirteen countries. One night I wrote a note to the Dean suggesting ways that faculty could use the arts to connect different cultures at these global sites. This started a conversation that resulted in my directing the four-year Working Group Translucent Borders. We brought musicians and dancers together across cultural and geographic borders in Israel, Palestinian Territories, Ghana, Cuba, and Native America, doing workshops on improvisation and collaboration. The project culminated with group performances at the Jacobs Pillow Dance Festival, Lincoln Center, NYU’s Jack Crystal Theater, and an academic conference in Abu Dhabi. We asked this question: How can the listening and interaction that is essential in music and dance ensembles provide a model for expanding people’s capacity to engage with otherness?

The Translucent Borders program has taken you across Africa, the Middle-East, and Europe. Is there a particular region or country that you’d like to travel to to learn more about the culture and music?

Although we worked in each location three times over these years, revisiting the same musicians and dancers, my experiences in Ghana, Cuba, and the Middle East were, in a sense, just teasers. These are life-long journeys, and I find myself a perennial beginner. I’m fascinated, particularly, with music that is carried through ancestral traditions that are often now endangered due to the sweeping power of Euro-American commercialism. Translucent Borders became a circle of friends, and I would love to go back to the folks in Ghana, particularly, and continue learning from them. But when you travel you also find yourself drawing more deeply from the well of your own cultural traditions. I’ve always loved the American folk style of Appalachian banjo and fiddle music, and, maybe via my Jewish roots, the many fascinating musics of Eastern Europe, at times in asymmetrical meters, with their heart-rending modal melodies and rich, open-calling singing styles.

The Translucent Borders program has clearly shaped much of the music on this album, but did your year-long expedition across the United States inform some more subtle touches on the album?

The string quartet Restless Nation was composed as a creative reflection on that home-schooling trip my wife and I made with two our kids, sleeping under the stars, hiking through the National and State Parks, and meeting people in different states of varied persuasions and opinions. The six short movements of the piece, performed on the album by the Cassatt String Quartet, are as much influenced by the wilderness and natural wonders we encountered as they are by the bowing styles of fiddlers we played with in Arkansas and Tennessee and the dance tunes we heard across the country. You can hear this particularly in the sixth movement, where the scordatura tuning gives the first violin that free-wheeling southern sound.

One of my earliest music memories is of a kind of saloon-style ragtime piano ringing through the house, played by my grandmother Anne, who was deaf, but had played for movie houses in the 1910s and 1920s. Her wild improvisations were more interesting to me than the staid classical exercises of my violin lessons. I started playing in folk and blues bands at the same time I started studying music classically. They say that if you take the music score away from a classical musician, he or she will stop playing, and if you put a music score in front of a folk musician, he or she will stop playing. The optimal musicianship, from my point of view, is the ability to engage imaginatively and skillfully as an improviser and also to know music literature. One of my favorite teachers was the wonderful Cuban-American composer/conductor Tania León. Like her, I find myself more and more avoiding the distinctions and lines between these kinds of music, simply because of where we are now in the history of art, and our moment in social evolution. People now grow up knowing how to navigate multiple identities and planes of cultural association. My students are less interested in abstraction and more drawn to their familial affiliations, the music of their ancestral lands or their ideas of what street music can mean. The question of how these cultural streams can affect new classical music is not a new one, and composers like Bartók, Crawford Seeger, León, and even Julia Wolfe have answered in their own ways. I think that genuine engagement with the long anonymous traditions of folk music can only strengthen and enrich new music, and inform and broaden the individual composer’s palette.

Are there any unique challenges that come from composing for instruments like nyckelharpa or oud when compared to more common western instruments? How did this shape your composing process?

I feel you need to know these instruments and become familiar with the music they’re most often associated with, to compose for them, at least in the way that is meaningful for me. When I became interested in composing a dance/theater piece based on the Danish writer Isak Dineson’s story, The Sailor-Boy’s Tale, I started listening to a lot of Scandinavian music. My ears were most excited by the Swedish dance tunes. I bought a Nyckelharpa from a Swedish boat builder/instrument maker, Kjell Lundvall. The nyckelharpa, or “key fiddle,” is hung from your neck horizontally, a bit like a guitar, and bowed vertically, but instead of pushing your fingers down on a fingerboard, you press wooden keys that change the string’s pitches. Also, there are two octaves of sympathetic strings tuned in half steps that resonate with a kind of acoustic reverb. It’s a beautiful, plaintive sound. In Europe, the nyckelharpa is becoming a favorite band instrument, and people like Marco Ambrosini, the soloist on my piece Secrets of the North, are marvelous improvisors on it. The oud, and its musical world, presents a unique challenge to the Western classical musician, that of the Arab Maqam system. Forgive me if I try to describe that for a moment here: Unlike the pitch world of Western classical music, which, as I see it, owes much of its harmonic brilliance to the half-step map of the keyboard, the Maqam world is based on the voice; it’s not based in mechanical half-steps, but is fluid. Many of the pitches lie somewhere between half-steps, for instance, between an E and Eb, though not exactly midway, depending on the particular maqam. It’s the kind of thing your ear becomes accustomed to only after some time, and therefore it does present a challenge to Western classical musicians, who have limited rehearsal time to learn a piece. It was a great gift to have Yair Dalal, the esteemed Israeli oudist, singer, and violinist, work with the Mivos Quartet in the recording studio to find the maqam sound for Azazme Songs. The energy they bring to the piece captures the essence of the Bedouin songs I heard in the Negev, which inspired the piece.

You’ve appeared in an Off-Broadway show, Woody Sez. How did that experience shape your composition “Letter From Woody?”

Most people, if not familiar with the many songs of the iconic folk balladeer Woody Guthrie, usually know his song This Land is Your Land from elementary school or summer camp. I play nine instruments in the show Woody Sez, the story of Woody’s life and the U.S. workers movement in the 1920s and 1930s. We’ve toured the show across the United States to China, Ireland, Germany, London, Israel and Palestinian Territories, where we brought 500 harmonicas to Palestinian schoolchildren and taught them to play O Susannah. Somewhere along the line, I learned that Woody’s wife Marjorie had been a dancer in the Martha Graham company. Woody’s daughter Nora Guthrie invited me into the Woody Guthrie Archives, where I found a series of letters Woody wrote to Marjorie trying to woo her from her (then) husband in Philadelphia, each letter a full school composition-book containing philosophical musings, wine-stained poetry, and drawings. I used one of these letters as the basis for the piece Letter from Woody. The full version is composed for orchestra, actor/folk singer, and dancer. The suite version recorded here is played by the Janáček Philharmonic Orchestra. The harmonica solo that opens the piece represents the wandering musician, a very simple melodic line that brings to the fore the folk/classical interweaving I’ve discussed above.

This album, RESTLESS NATION, gives me the chance to offer my creative response to this moment in time, which I see as a kind of crossroad, musically and otherwise. With the enormous rise of social media and its global power, with increased immigration and social hybridizations, we often find ourselves in places of juxtaposition, face to face with new musical styles and approaches. So it feels like being a composer now means something different from what it may have been even a few years back. The album shows some of the ways I’ve been able to learn from a few remarkable musicians and communities I’ve encountered through my travels, and the adventure of seeking my own signature style in all of that…an adventure that continues. 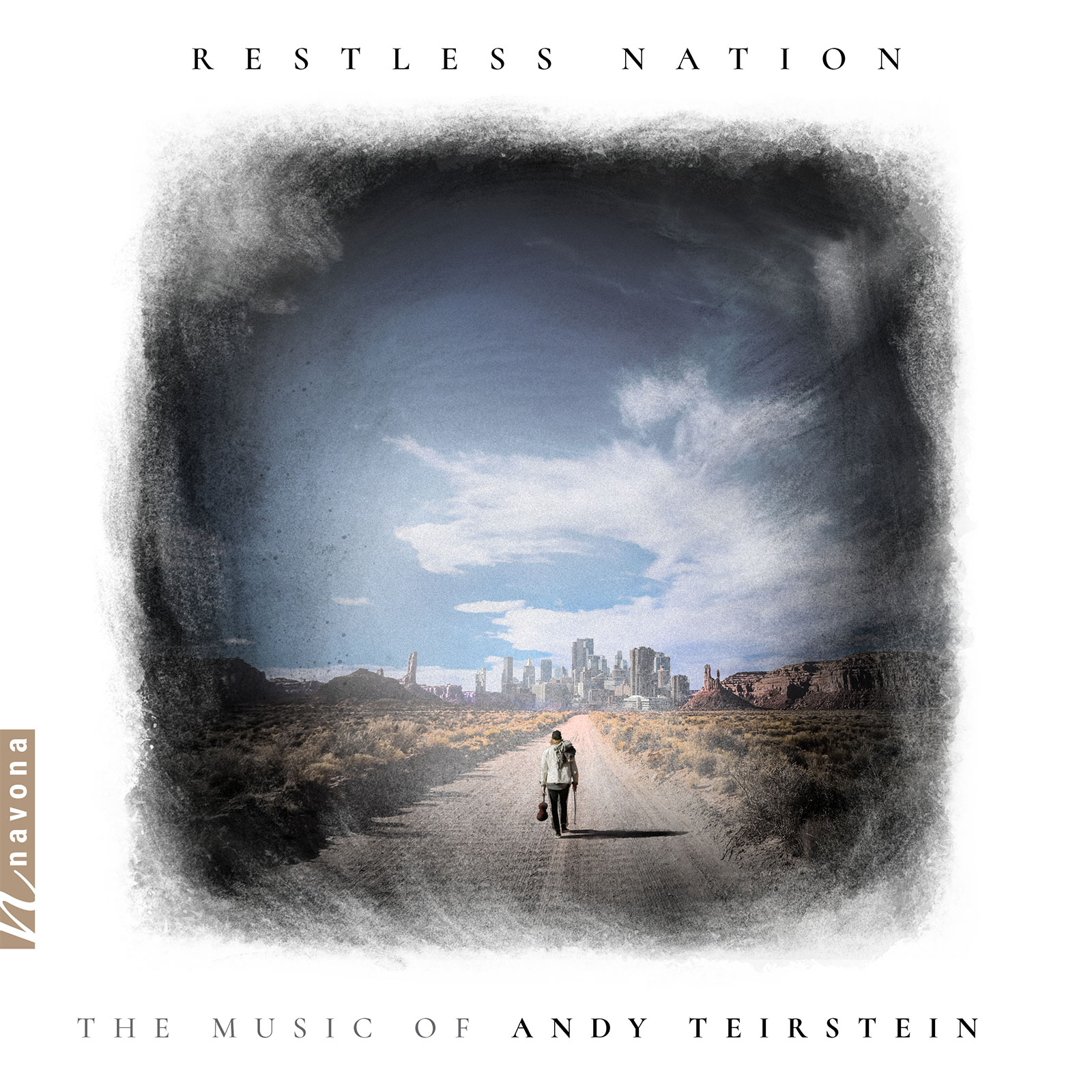 RESTLESS NATION is available now from Navona Records. Click here to visit the catalog page and explore this album.