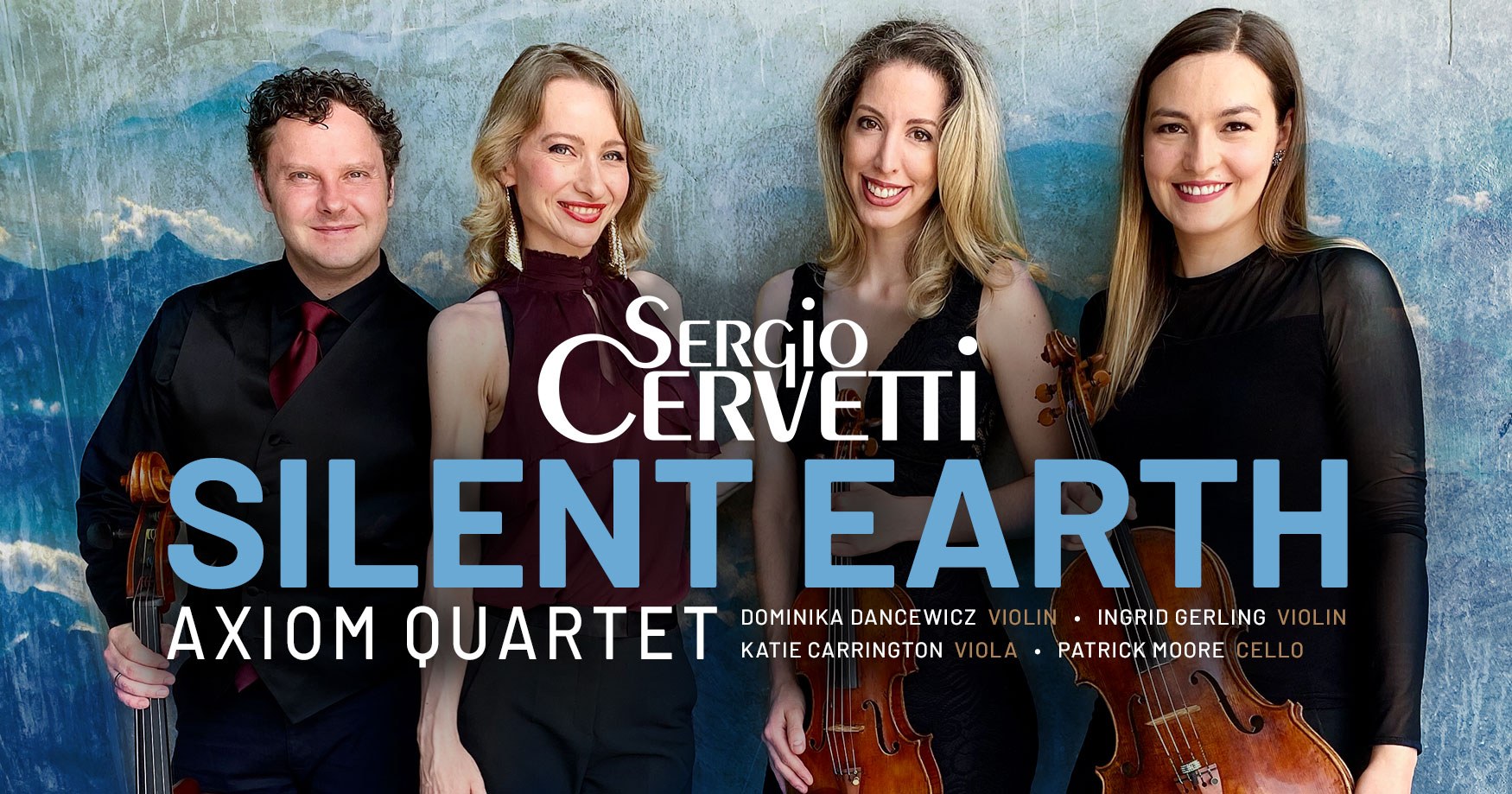 This world premiere of “Silent Earth” by Sergio Cervetti (b. 1940) is part of Axiom Quartet’s ongoing dedication to commissioning new works by major American composers. Based in Houston TX, Axiom is known for their diverse approaches to the string quartet repertoire and champions works from all genres, regions, and time periods.

In three movements, “Silent Earth” is Cervetti’s meditation on the planetary crisis humanity faces and a lamentation on our inability to act. In three movements the work juxtaposes a wide gamut of emotions that come from grappling with the sheer enormity of global warming and climate change.

I have written 6 string quartets in my long career as a composer. “Silent Earth” is my fifth.

Some of them, such as this one, concern political and social topics and the problems that humanity is facing.

Although the dystopian movement titles, Silent Earth, Supplica and The Last Harvest, may sound pessimistic, the music is not. The final movement is a sprightly dance, and Supplica, written in a neo-romantic style, is pure love. This middle movement appropriately quotes the first 4 notes from Alban Berg’s Wozzeck (Marie’s prayer at the beginning of Act III) “Es ist kein Betrug in seinem Munde erfunden worden” which means “And out of his mouth there came forth neither deceit nor falsehood.”

I want to thank the members of Axiom Quartet for their dedicated performance and PARMA Recordings for making this possible and available to a large audience. 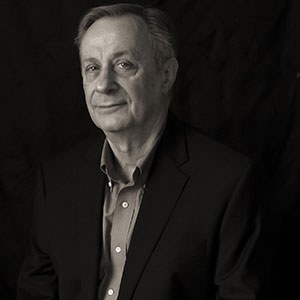 Sergio Cervetti, a Uruguayan-born American composer, came to the United States in 1962 to study composition. By 1966 he attracted international attention by winning the chamber music prize at the Caracas Venezuela Music Festival. After graduating from the Peabody Conservatory in 1967, where he studied with Ernst Krenek and Stefan Grové, he was invited by the DAAD to be a composer-in-residence in Berlin, Germany in 1969-70. From 1972-97 and 2007-08 Cervetti was Professor of Music at New York University / Tisch School of the Arts.

With a distinguished career and extensive body of work, Cervetti remains invested in composition as an intimate medium of communication, and gives each piece a complex, personal voice. He has composed over 150 works for orchestra, chamber music, song cycles, choral, solo instruments, and opera that range from acoustic to electronic music. They represent a post-modern synthesis of European tradition, folk elements, and minimalist aesthetics, and reflect his interest in literature, painting, dance, and socio-political topics as well as his rich South American heritage. Contributions to the early minimalist movement, available on Navona Records, are Guitar Music (the bottom of the iceberg), …from the earth…, Concerto for Trumpet, Strings and Timpani, and Candombe for Harpsichord. Three Next Wave Festivals at the Brooklyn Academy of Music featured his collaborations with New York City’s dance world. The Alicante Festival in Spain commissioned the harpsichord concerto Las Indias Olvidadas to commemorate the 500th anniversary of Columbus’ discovery of America. The opera Elegy For A Prince was premiered in several excerpted concert scenes by New York City Opera/VOX 2007, followed by a similar performance in 2020 by Distinguished Concerts International New York (DCINY) at Carnegie Hall. Other highlights include two tours in Spain with the National Youth Orchestra of Spain (JONDE), and sections of The Hay Wain, an electroacoustic tone-poem, are heard in Oliver Stone’s film Natural Born Killers. The Navona album PARALLEL REALMS – XXI CENTURY WORKS FOR ORCHESTRA was Global Music Awards’ Gold Medal Winner in 2019. 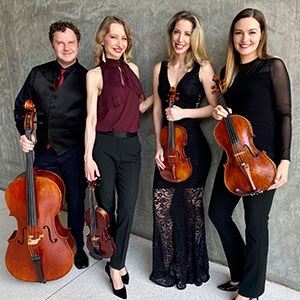 The Axiom Quartet is a dynamic and passionate string quartet that explores all genres of music with no boundaries or limits. Axiom has become known around Texas for their inventive programs that mix music from the classical canon with transcriptions, and new compositions along with the inclusion of popular rock, electronic, indie, jazz and pop genres in a single concert experience. The unifying concept is simply expressivity whereby Axiom’s concerts turn classical fans towards extraordinary popular music, while serving as classical music advocates to those who normally do not attend classical concerts.

The individual players of Axiom, Dominika Dancewicz and Ingrid Gerling – violin, Katie Carrington – viola, Patrick Moore – cello, have decades of combined experience performing internationally as soloists, chamber musicians, and orchestral performance. The Axiom Quartet serves as outreach ambassador for Chamber Music Houston, one of Houston’s top chamber music presenters. The CMH collaboration allows the group to perform their innovative programs in communities where access to live music is limited. Axiom has also performed with the nationally recognized “Harmony in the Air” program and presented weekly concerts at Houston’s George Bush Intercontinental Airport. Axiom is the first classical string ensemble to ever play at Cave Without a Name in the Texas Hill Country. For the past four years, they have played in the cave to overflowing audiences.

Recent major projects include: the release of their first album Axioms – Moments of Truth (which was a commercial success and sold out within 24 hours of being released on Amazon, a tour of 12 concerts in 20 days throughout China in the summer or 2018, and a tour of the Midwest U.S. in the fall of 2019 where the group gave masterclasses and appeared as soloists with university orchestras in the region.