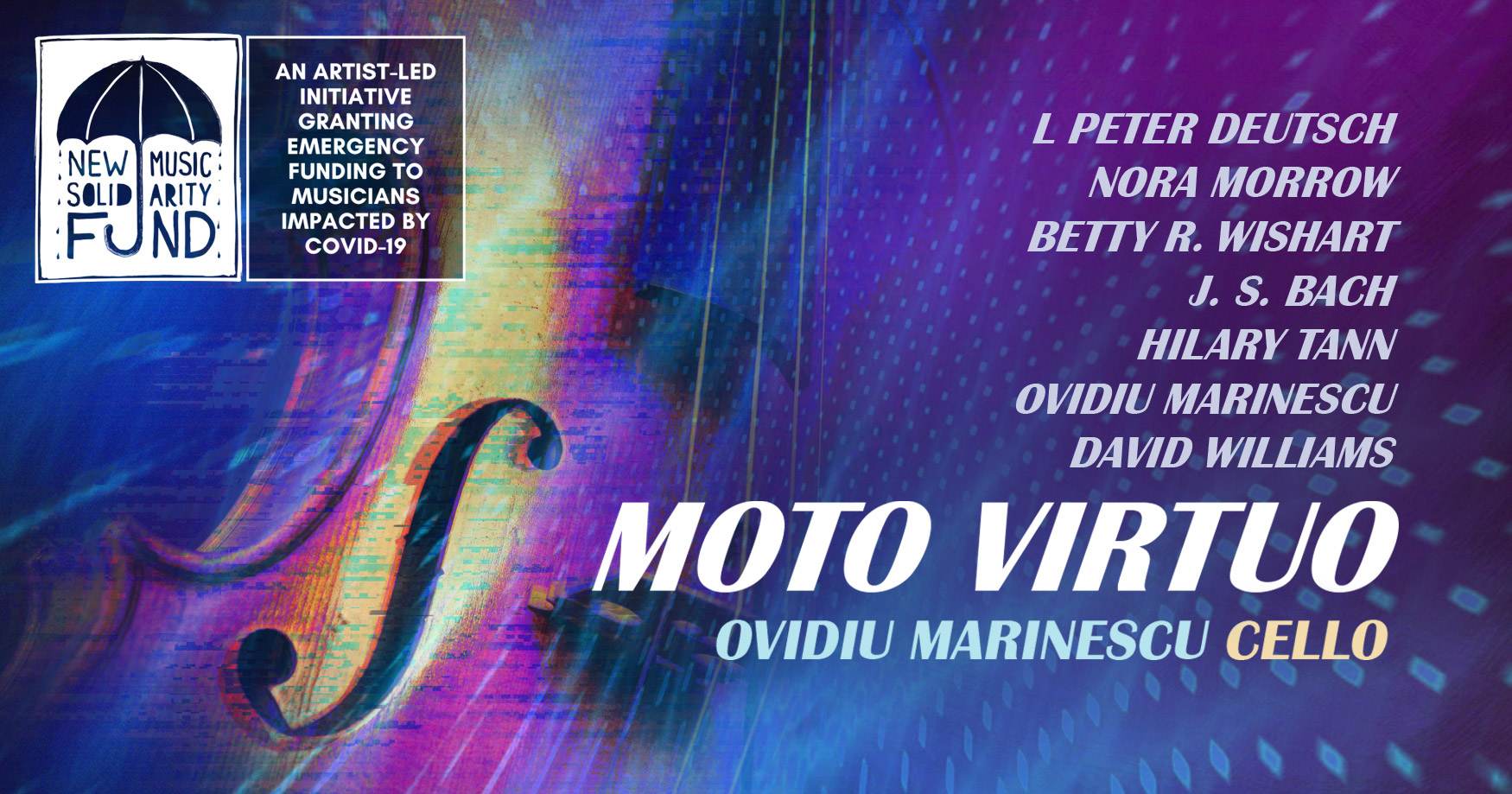 PARMA Recordings presents MOTO VIRTUO, an online benefit concert with cellist Ovidiu Marinescu for The New Music Solidarity Fund. This event is an extension of PARMA’s ongoing MOTO series, which has been praised as “bold and expressive” (Gramophone Magazine) and “tight, musical, technically virtuosic” (The Whole Note).

Since its launch in 2012, the MOTO series has premiered works by nearly three dozen composers in both recordings and performance. This live online program presents works by Hilary Tann, Nora Morrow, Betty R. Wishart, L Peter Deutsch, David Williams, J.S. Bach, and a premiere of one of the cellist’s own compositions.

Please view our Tip Jar below to make your donation. The Tip Jar will be open until May 15, 2020.

Aloneliness for solo cello was born on the afternoon of March 24, 2020 and was composed in less than an hour. Edits and score details were added over the next few days. In a subtle way, Aloneliness reflects feelings triggered by the social distancing recommended by scientists and the government as a result of the COVID-19 virus.

Ovidiu Marinescu, a native of Romania, is active as a cellist, conductor, composer, and educator. He has performed at Carnegie Hall, Merkin Hall, the Great Hall of the Moscow Conservatory, Rachmaninov Hall, Holywell Room in Oxford, Oriental Art Center in Shanghai, and many other venues around the world. He has appeared as a soloist with the New York Chamber Symphony, the National Radio Orchestra of Romania, Moscow Chamber Orchestra, Helena and Newark Symphonies, Southeastern Pennsylvania Symphony Orchestra, the Cleveland Philharmonic, Limeira Symphony in Brazil, Orquesta de Extremadura in Spain, and most orchestras in Romania. Recently, he served as a member of the jury and guest professor for the Greenhouse Foundation Awards and Festival in Seoul, South Korea, and Composer-in-Residence for the International Chamber Music Festival in Guatemala City. His works have been performed in Romania, China, Brazil, Guatemala, and across the United States.

Marinescu has had more than 10 album releases with PARMA Recordings and Cambria as a cellist, conductor, and chamber musician, as well as several independently-released recordings.

This short piece, originally scored for clarinet, is a successor to my trio A Rest on the Road. The mixture of strongly metrical and more fluid rhythms hopes to evoke feelings of alternatively marching or strolling along a country road.

L Peter Deutsch is a native of Massachusetts, now living in Sonoma County CA. His early music education included performance and composition for voice, piano, and recorder. After a long detour through a distinguished career in Computer Science, he returned to composition part-time in 1986 and full-time in 2003, including a M.A. degree under Frank La Rocca at CSU Hayward.

Deutsch’s strengths as a composer include sparkling counterpoint and polyphony, lyrical melodies, fluent text setting, and the use of a large harmonic palette centered around modal scales. He writes primarily for small instrumental or a cappella vocal ensembles, spanning styles from devotional to romantic to jazzy, and from Renaissance to early 20th Century. Scores of his music are distributed commercially through J.W. Pepper and Sheet Music Plus. His work to date includes three choral commissions in 2008-2010, and several recording releases through PARMA Recordings from 2016 onward, including music for chorus, string quartet, and piano trio.

I had a feeling of elation when I first started writing this piece because I had just spoken to my sister who I had not spoken to in years due to a falling out. I had also been pondering how to get in touch with and sustain an inner joy during this very dark, difficult pandemic.

The piece’s first title was Reunited but while walking outside and seeing bright, glorious daffodils everywhere, I decided to change the name to Daffodil Sun. Later on in a conversation with Ovidiu he told me that C major, the key this piece is written in, is the key of light.

I am hoping that Daffodil Sun resonates with the light and joy that is always in us somewhere.

Nora Essman Morrow, born in New York City has been a musician all her life. As a child she composed songs on the guitar and improvised stories at the piano. Morrow attended the Precollege Division of Manhattan School of Music and The High School of Music and Art in NYC. Introduced to modern dance accompanying through a music and movement class In her first year of college at The City University of New York, she began accompanying modern dance classes in the New York area. Continuing her musical studies and dance accompanying at The University of Utah – Salt Lake City, University of Wisconsin – Madison, and Northern Illinois University, her studies encompassed classical, contemporary, electronic, jazz, as well as music education as each school had a different focus and specialty. Throughout these college years Morrow worked with modern and ballet dancers and upon returning to New York, worked at the Conservatory of Dance at Purchase College and many other dance schools in the area as an accompanist and composer. In 2010 she wrote and produced an album titled, Shawna The Bird, A Musical Adventure with music that had been commissioned by a children’s modern dance school. Some of Morrow’s works can be found on a chamber works album titled, FLEETING REALMS as well as on an album of string quartets titled, QUADRANTS VOL 3. Currently residing in New York, Morrow teaches piano, accompanies dance, composes and is also working on a musical/operetta about her great grandfather’s Russian Opera Company. Her music is engaging, kinesthetic, visual and evocative.

When I wrote this piece, my nerves were hanging by a thread. Administering and grading exams, rehearsals, having students perform piano juries, and completing an overdue piece all occurred within the span of three days. The piece was my way of releasing stress.

A member of the music faculty at Campbell University, she has been credited in numerous publications including Who’s Who in Music, World Who’s Who of Women, Personalities of the South, and has received awards from American Pen Women, Composers Guild, American College of Musicians, and ASCAP. Most recently she was awarded a 2015 Regional Artist Project Support Grant from the Arts Council of Fayetteville and Cumberland County.

The first two sections of the Seven Poems of Stillness set the stage for the remainder of the cycle. All poems are by lauded Welsh poet, R. S. Thomas, and the titles of each solo cello section reflect the aspect of the poetry that the composer wished to capture. The opening poem sees the narrator “Kneeling before an altar / of wood in a stone church,” and the title “the air a staircase / for silence” is reflected in the step-like phrases of the solo cello. In contrast, the second movement moves out through time and space to where, “All throughout history / The great brush has not rested, / Nor the paint dried.” The movement turns as the earth turns, fading from sight as it returns to its opening. The Seven Poems of Stillness were premiered by Guy Johnston, with narration by the recorded voice of R. S. Thomas, at the 2103 Gwyl Gregynog Festival.

Welsh-born composer Hilary Tann lives in the foothills of the Adirondack Mountains in Upstate New York where she is the John Howard Payne Professor of Music Emerita at Union College, Schenectady. Her compositions have been widely performed and recorded by ensembles such as the European Women’s Orchestra, Tenebrae, Lontano, Marsyas Trio, Thai Philharmonic, Royal Liverpool Philharmonic, and BBC National Orchestra of Wales. Recent composer-residencies include the 2011 Eastman School of Music Women in Music Festival, 2013 Women Composers Festival of Hartford, and 2015 Welsh Music Center. Praised for its lyricism (“beautiful, lyrical work” – Classical Music Web) and formal balance (“In the formal balance of this music, there is great beauty …” – Welsh Music), her music is influenced by a strong identification with the natural world. She is a published haiku poet and a deep interest in the traditional music of Japan has led to private study of the shakuhachi and guest visits to Japan, Korea, and China. Other recordings of Hilary Tann’s music, released by Ravello and Navona, include, EXULTET TERRA, KID STUFF, TOMORROW’S AIR, and AND THE SNOW DID LIE.

The two pieces heard here are “Tyomnaya Noch (Night Is Dark)” and “Losing Venus” and are two of the five movements of an unaccompanied cello sonata, Moments In A Life. It is truly an honour to have such an accomplished and erudite musician like Maestro Marinescu perform them.

David Williams started writing music while studying at William Paterson University under the renowned composer Hugh Aitken. He later received his M.A. from Montclair State University as a student of Doctor Ting Ho. Although his career of over thirty years was in Information Technology he found the time to compose and keep music an integral part of his life. His compositions over the past four decades encompass orchestral, ensemble and solo works.

New Music USA is the leading national resource for new music. We are here for the whole new music community – we support and connect music makers, organizations, and audiences by:

As we go about our work, we make a point of not defining too precisely what we mean by new music. We simply want all music that’s not commercially viable to flourish through its originality and diverse forms of expression. We also believe that it’s a spectacular time for creativity and collaboration and we are keen for the work we support to reflect the talent of creators and practitioners from all backgrounds and from every part of the United States.

Nationally and internationally, New Music USA plays a crucial role through its engagement with Performing Arts Alliance, the International Association of Music Information Centers, the International Society for Contemporary Music and more. Those partnerships help us represent the interests of our constituents amongst organizations we can learn from and collaborate with from across the US and beyond.

In each different context for our work, our focus is on the music; this is what unites everyone engaged with our community. Our newsletters, magazine, radio, and social media channels present a snapshot of that music including artists in their own voice, opportunities for you to apply for support and details of live performances near you.