The MFO Presents: A Concert of Gratitude 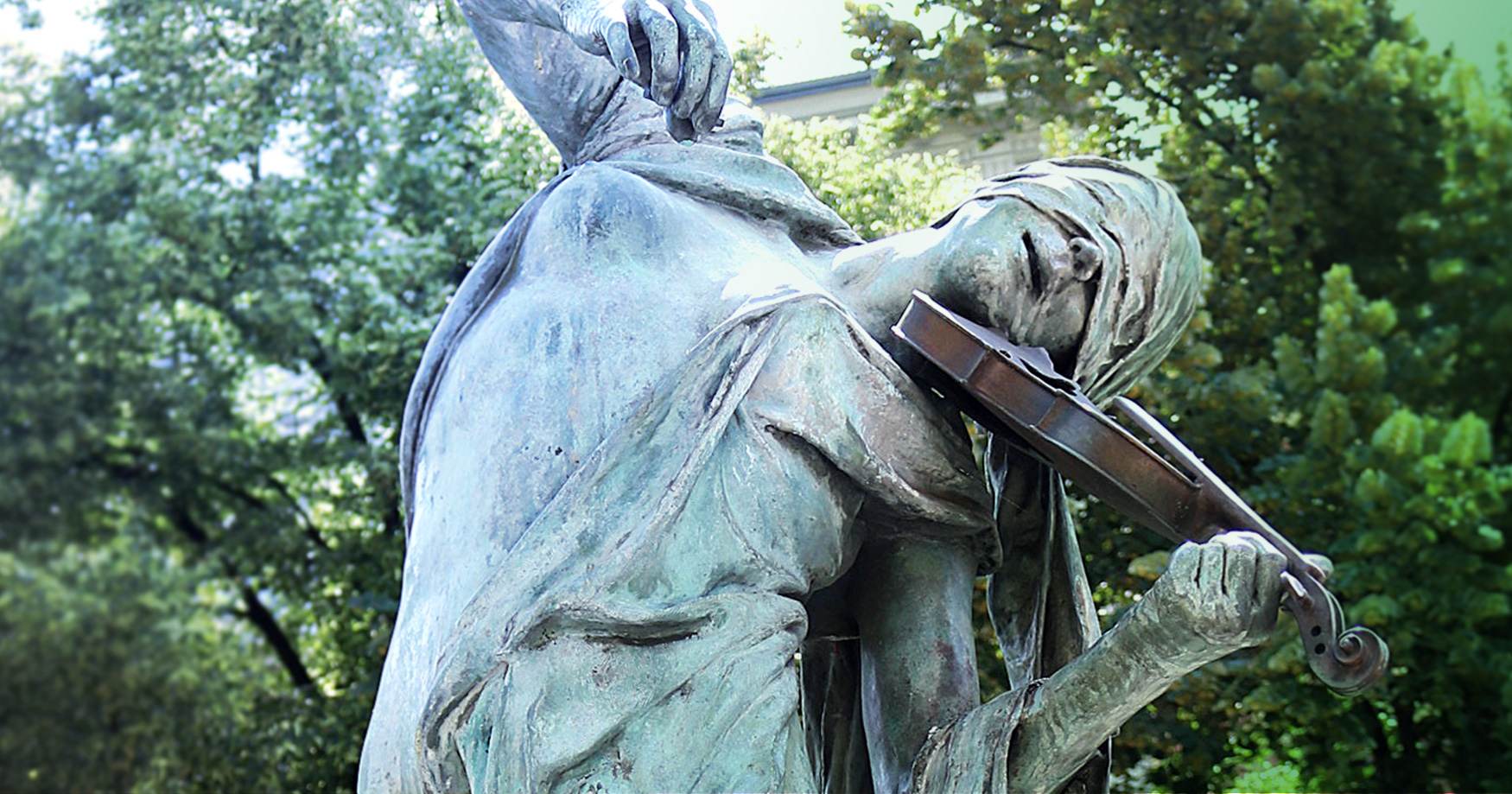 Showing gratitude to their supporters, members of the Moravian Philharmonic Olomouc with PARMA Recordings present the finest works of influential composers past and present. Music by Antonín Dvořák and Michail Ivanovič Glinka, as well as contemporary composers Sergio Cervetti, Sarah Wallin Huff, Bill Sherrill and Chen-Hsin Su will be performed live, exclusively on the PARMA Live Stage.

The Moravian Philharmonic Olomouc dedicates this concert to their regular listeners who have held their concert tickets as a donation to the ensemble, despite cancellations due to the world health crisis.

Sergio Cervetti, a Uruguayan-born American composer, came to the United States in 1962 to study composition. In 1966, he attracted international attention after winning the chamber music prize at the Caracas Venezuela Music Festival. After graduating from Peabody Conservatory in 1967, where he studied with Ernst Krenek and Stefan Grové, he was invited by the DAAD to be composer-in-residence in Berlin Germany in 1969-70. From 1972 to 1997 and 2007-08, Cervetti was professor of music at New York University/Tisch School of the Arts.

With a distinguished career and extensive body of work, Cervetti remains invested in composition as an intimate medium of communication and gives each piece a complex, personal voice. He has composed over 150 works for orchestra, chamber music, song cycles, choral, solo instruments, and opera that range from acoustic to electronic, and his works are a post-modern synthesis of techniques from European tradition, folk elements, and minimalist aesthetics. They reflect his interest in literature, painting, dance, and socio-political topics as well as his rich South American heritage. Contributions to the early minimalist movement, available on previous Navona releases, are Guitar Music (the bottom of the iceberg), Madrigal III, …from the earth…, Concerto for Trumpet, Strings and Timpani, and Candombe for Harpsichord. Three Next Wave Festivals at the Brooklyn Academy of Music featured his collaborations with New York City’s dance world. The Alicante Festival in Spain commissioned the harpsichord concerto Las Indias Olvidadas. The opera Elegy For A Prince was premiered in excerpted scenes by New York City Opera/VOX 2007. Career highlights also include tours in Spain with JONDE, the National Youth Orchestra of Spain, and sections of The Hay Wain, an electroacoustic tone-poem, are heard in Oliver Stone’s film Natural Born Killers.

Sergio Cervetti’s work is available at The Arthur Friedheim Library and Archives at The Peabody Institute of The Johns Hopkins University, and the New York Public Library.

Sarah Wallin Huff is a lecturer and professor of music at California Polytechnic University of Pomona. She received her M.A. in Music Composition at Claremont Graduate University in 2008, and she was the Professor of Composition and Advanced Theory (as well as conductor of the Chamber Ensemble) at The Master’s University in Santa Clarita from 2012 to 2016.

Wallin Huff has been a performer on the violin, viola, and 6-string electric violin since 1990. She plays with diverse ensembles and performs as a soloist for a variety of events and concerts, as well as performing on various recording projects, large and small. Her original compositions have been performed throughout the States and abroad, including the Exeter Phoenix Auditorium in Devon, England and Zipper Hall in Los Angeles. Her work has been called “a stunning collection of gorgeous, orchestral selections…that are, at times, vividly haunting but always entirely engrossing” (Barbra Dillon); “…incredible depth and creative complexity” (Wesley Derbyshire); “Her music is quite complex and unusual and yet…very easy to absorb and appreciate” (Baby Sue); and “Sarah’s music has a classy, understated sound, yet it is baroque and ornate…A true masterpiece, with so many nuances” (ArtistRack). Her compositions range from solo works to chamber ensembles, orchestral concert pieces, and electronic work, as well as work for film and video games. While her sonic output crosses a variety of moods and styles, a common thread linking them all is what she calls “stream-of-consciousness composition,” in which every piece is built upon an enigmatic, underlying framework, from which the work fluidly evolves.

When Bill Sherrill (b. 1939) departed for college with piano and voice scholarships, there were fond hopes within his family of a musical career for him. College tennis and the study of Chemistry soon displayed and delayed those hopes. After college and during a working career which included stints as a Naval Flight Officer, Intelligence Officer, and Chief Administrator for large law firms, he kept in touch with music by singing in varied oratorio and symphonic choruses. He retired early to study music and has been composing ever since. He also serves as a Church Musician which provides a ready venue for conducting, composing, and arranging.

Sherrill’s degrees are from Erskine College, North Greenville University, and the University of Southern California; and he also studied postgraduate composition and conducting at Converse College and Westminster Choir College, respectively. He is a member of the Society of Composers International, the American Choral Directors Association, ASCAP, and the Hymn Society. He composes and arranges in many musical genres and for most instruments, but specializes in choral music. His works have been premiered at several universities and churches and in New York City.

The pianist Lucie Kaucká was born on March 31, 1978 in Kraslice near Karlovy Vary, where she began studying music at the age of seven. She continued her piano studies at the Conservatory of Teplice and the Conservatory of Pardubice with Martin Hröel. After graduation from Pardubice she concentrated on the study of musicology at the Palacky University in Olomouc and finished successfully there in 2003.

Kaucká was active as a pianist under the direction of the late Professor Jirí Skovajsa and has performed in many international masterclasses. She is the director of the piano department at the international Czech Music Camp for Youth during the summer.

She has performed as a soloist, accompanist, and as a member of several chamber ensembles in the Czech Republic and abroad. She has participated in recordings with the Moravian Philharmonic Orchestra and with the chamber orchestra Camerata Moravia since 2004. Lucie recorded many compositions for solo piano, as well as for various chamber ensembles for PARMA Recordings over the past 10 years.

Czech violinist and producer Vít Muzík (b. 1972) is one of the most multifaceted musicians working on the contemporary classical music scene. His abilities both as a performer on the concert stage and in the recording booth have led to appearances on more than 60 recordings in the Navona and Ravello catalogs, making him one of PARMA Recordings’ most frequent collaborators.

Muzík studied under Prof. Ladislav Gorula at the Janacek Conservatory of Ostrava in his native Czech Republic, and his pursuit of advanced studies on the violin later brought him to Mannes College at The New School for Music in New York NY, the College Conservatory of Music at the University of Cincinnati OH, and the Mozarteum University in Salzburg, Austria under Sándor Végh. Since 2004, Muzík has served primarily as the Concertmaster for the world-renowned Moravian Philharmonic Orchestra, frequently working also as a producer for recording sessions held at Reduta Hall in the ensemble’s home base in the historic city of Olomouc.

As a performer, his talents both as a chamber musician and as a soloist on the violin have brought him to concert stages across Europe and North America.

The Moravian Philharmonic Orchestra is one of the foremost and oldest symphony orchestras in the Czech Republic. It is based in the historical capital of Moravia, the city of Olomouc, and has been a leader of music activities in the region for the past 70 years. Its artistic development was directly influenced by distinguished figures from the Czech and international music scene. Namely, they include conductors like Otto Klemperer and Václav Neumann, violinists Josef Suk and Gidon Kremer, or cellist Pierre Fournier.

During the course of its long history, The Moravian Philharmonic Orchestra has put together an exceptionally broad, rich and varied repertoire. Its focus is mostly on the grand figures of classical music of the 19th and 20th century. Nonetheless, it also seeks to promote contemporary Czech and worldwide musical compositions, as evidenced by the fact that the Orchestra has performed over 250 new compositions. Moreover, the Orchestra is an authentic performer of Czech classics such as Antonín Dvořák, Bedřich Smetana, Leoš Janáček, and Bohuslav Martinů.

The Moravian Philharmonic Orchestra takes pride in having a rich discography under its belt and performing at renowned international festivals both in the Czech Republic and abroad. However, first and foremost, it is a cultural institution and a major contributor to the organization of artistic life in the region of Olomouc. It holds the Dvořák’s Olomouc festival and the International Organ Festival and also organizes a number of educational activities for children and young people.