Please view our Tip Jar below to make your donation. 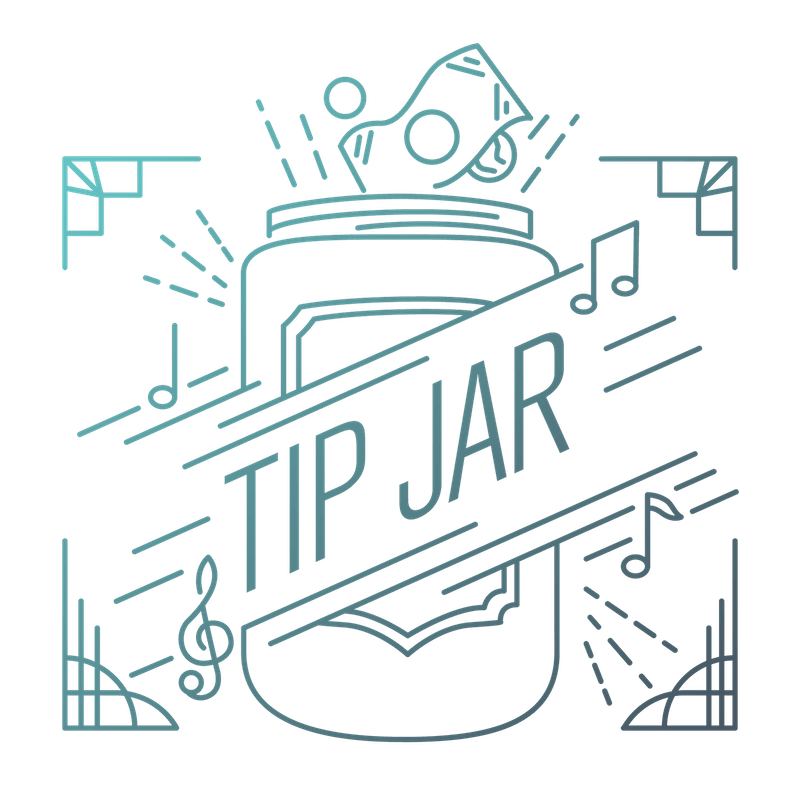 Donations collected will go towards furthering New Music USA’s efforts to support musicians, venues, and organizations impacted by the current crisis and to Ms. Goodman.

Lindsey Goodman is a soloist, recording artist, chamber collaborator, orchestral musician, educator, and clinician. Renowned for her “generous warmth of tone and a fluid virtuosity” (Charleston Gazette), Lindsey has performed solo and chamber concerts, taught masterclasses, and given presentations at countless series, festivals, and universities “with energy and artistry, conveying her exuberance and creativity” (Pittsburgh in the Round). Performances “played with conviction” (New York Times) have been heard across three continents, including at Carnegie Hall, Eastman School of Music, Edinburgh Festival Fringe, University of Cincinnati College–Conservatory of Music, New York City Electroacoustic Music Festival, Oberlin Conservatory of Music, Google headquarters, several National and Canadian Flute Association conventions, and across China.

A committed advocate for living composers and electroacoustic music, Lindsey “appears to know no fear in tackling the most demanding music” (Pittsburgh Tribune-Review) and is an active commissioner of new works with over 145 world premieres to her credit. For over 18 seasons, she was solo flutist of the Pittsburgh New Music Ensemble. Her debut solo album, reach through the sky, is available from New Dynamic Records, and her second solo release, available from PARMA Recordings, is returning to heights unseen, “an excellent album of compelling works expertly performed” (The Flute View). Her most recent album, Etereo, also from PARMA Recordings is “an enthralling album of new works for flute” (The Flute View). She can also be heard in solo, chamber, vocal, and orchestral performances on the New World, Albany, New Focus, and Navona labels, among others. Lindsey has given multiple professional recitals in New York City, performed concertos from Mozart to commissioned works in the United States and Canada, and been featured in live and recorded radio broadcasts on stations across the country.

Lindsey is principal flutist of the West Virginia Symphony Orchestra, adjunct lecturer at West Virginia State University and Marietta College, and solo flutist of the new music ensemble What Is Noise. She is a founding member of the Leviathan Trio (flute, cello, and piano), flute quartet PANdemonium4, and Chrysalis, a singing flutist and singing pianist duo, showcasing her training as a classical mezzo-soprano. A student of Walfrid Kujala and Robert Langevin, Lindsey received degrees from the Manhattan School of Music, Northwestern University, and Duquesne University. She resides in Ohio with her husband, percussionist, composer, and educator Chris Carmean, and their dog Jack. 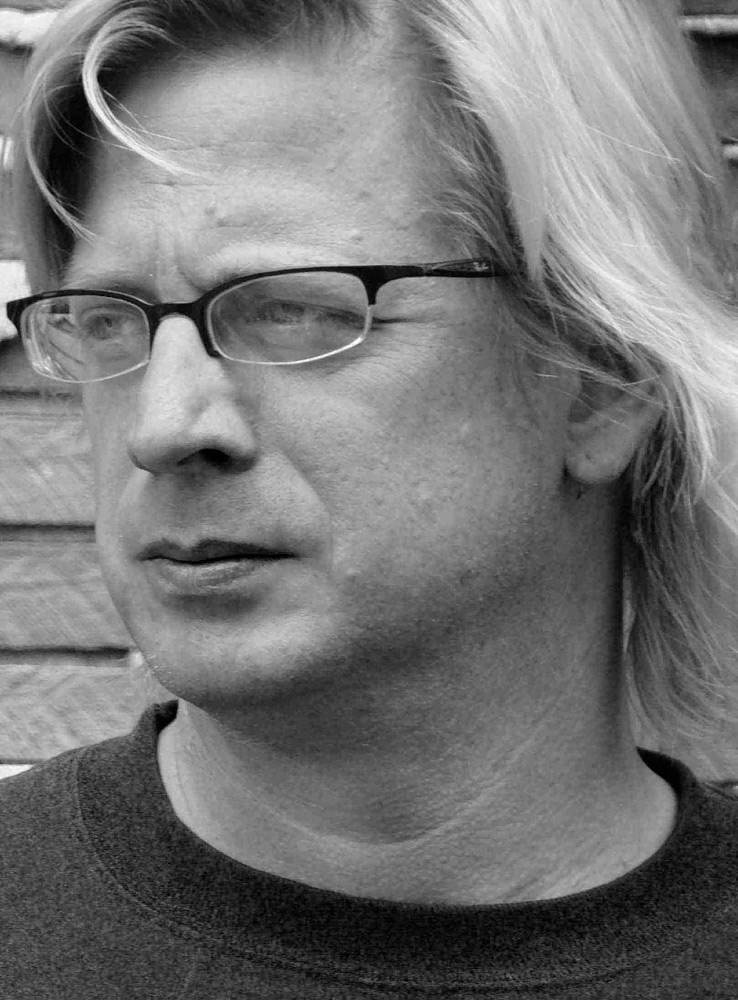 Mark Zanter, an active composer/performer, has received commissions from the UIUC Creative Music Orchestra, CU Symphony, the American Composers Forum, the WV Commission on the Arts, WVMTA, Due East, Şõlen Dikener, Rick Kurasz, Cetin Aydar, Ankara University Soloists, Lindsey Goodman, Trifecta!, Awea Duo, and many others. He has appeared as a composer and performer on NPR’s Live at the Landmark, WILL, IPR, Second Sunday concerts, and on WVPN’s In Touch With The Arts; is published by Les Productions d’OZ, Schott European American and MJIC Music publishing; and his works have been performed nationally and internationally at festivals including MUSIC X, June in Buffalo, The Cortona Contemporary Music Festival, NYCEMF, the Atlantic Center for the Arts, and Echofl uxx 14. He is the recipient of grants/awards from the American Society of Composers and Publishers (ASCAP), the American Music Center (AMC), the American Composers Forum (ACF), Meet the Composer, The West Virginia Division of Culture and History, and WV Music Teachers Association.

Dr. Zanter’s research interests include Algorithmic Composition, Structural Models for Improvisation, and Conduction®, the music of Butch Morris. Zanter completed his Doctor of Musical Arts degree in composition at the University of Illinois where he studied with Salvatore Martirano, William Brooks, Paul Martin Zonn, and Erik Lund. He is Coordinator of Music Theory and Composition at Marshall University, Huntington WV. 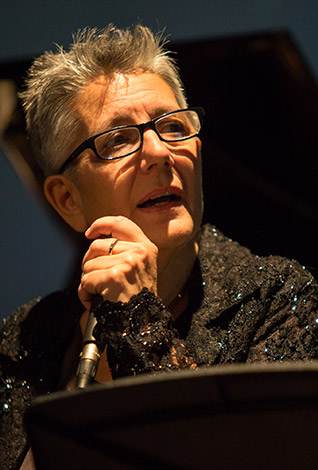 According to the Los Angeles Times, composer and performer Eve Beglarian “is a humane, idealistic rebel and a musical sensualist.” A 2017 winner of the Alpert Award in the Arts for her “prolific, engaging and surprising body of work,” she has also been awarded the 2015 Robert Rauschenberg Prize from the Foundation for Contemporary Arts for her “innovation, risk-taking, and experimentation.”

Beglarian’s current projects include a collaboration with writer/performer Karen Kandel about women in Vicksburg from the Civil War to the present, a piece about the controversial Balthus painting Thérèse Dreaming for vocalist Lucy Dhegrae, and a duo for uilleann pipes and organ that was premiered by Renée Louprette and Ivan Goff at Disney Hall as part of the Los Angeles Philharmonic’s 100th anniversary celebrations. Since 2001, she has been creating A Book of Days, “a grand and gradually manifesting work in progress…an eclectic and wide-open series of enticements.” (Los Angeles Times)

In 2009, “Ms. Beglarian kayaked and bicycled the length of the Mississippi River [and] has translated her findings into music of sophisticated rusticity… [Her] new Americana song cycle captures those swift currents as vividly as Mark Twain did. The works waft gracefully on her handsome folk croon and varied folk instrumentation as mysterious as their inspiration.” (New York Times)

Beglarian’s chamber, choral, and orchestral music has been commissioned and widely performed by the Los Angeles Master Chorale, the American Composers Orchestra, the Bang on a Can All-Stars, the Chamber Music Society of Lincoln Center, the California EAR Unit, the Orchestra of St. Luke’s, Sequitur, loadbang, the Guidonian Hand, Newspeak, the Ekmeles Vocal Ensemble and individual performers including Maya Beiser, Sarah Cahill, Lauren Flanigan, Marya Martin, and Mary Rowell.

Performance projects include Brim, Songs from a Book of Days, The Story of B, Open Secrets, Hildegurls’ Ordo Virtutum, twisted tutu, and typOpera. 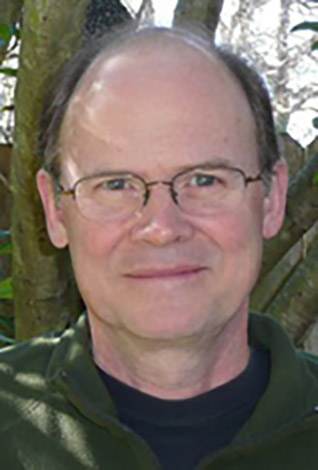 Russell Pinkston is a composer, teacher, and sound designer who currently lives in Austin, Texas. He has composed music in a wide variety of styles and genres, from choral, chamber, and symphonic works, to electronic music for modern dance. In recent years, he has specialized in writing interactive compositions for acoustic instruments and electronic sounds, and he has developed a number of software tools for real-time audio processing and score following. Since 1983, he has been on the faculty of The University of Texas at Austin, where is Professor of Composition and Director of Electronic Music Studios. He is also a founding member and past president of the Society for Electro-Acoustic Music in the United States (SEAMUS). In a former life, he was the lead guitarist, singer, and principal songwriter for Tracks, a progressive rock band that played throughout New England from 1969 to 1974.

New Music USA is the leading national resource for new music. We are here for the whole new music community – we support and connect music makers, organizations, and audiences by:

As we go about our work, we make a point of not defining too precisely what we mean by new music. We simply want all music that’s not commercially viable to flourish through its originality and diverse forms of expression. We also believe that it’s a spectacular time for creativity and collaboration and we are keen for the work we support to reflect the talent of creators and practitioners from all backgrounds and from every part of the United States.

Nationally and internationally, New Music USA plays a crucial role through its engagement with Performing Arts Alliance, the International Association of Music Information Centers, the International Society for Contemporary Music and more. Those partnerships help us represent the interests of our constituents amongst organizations we can learn from and collaborate with from across the US and beyond.

In each different context for our work, our focus is on the music; this is what unites everyone engaged with our community. Our newsletters, magazine, radio, and social media channels present a snapshot of that music including artists in their own voice, opportunities for you to apply for support and details of live performances near you.