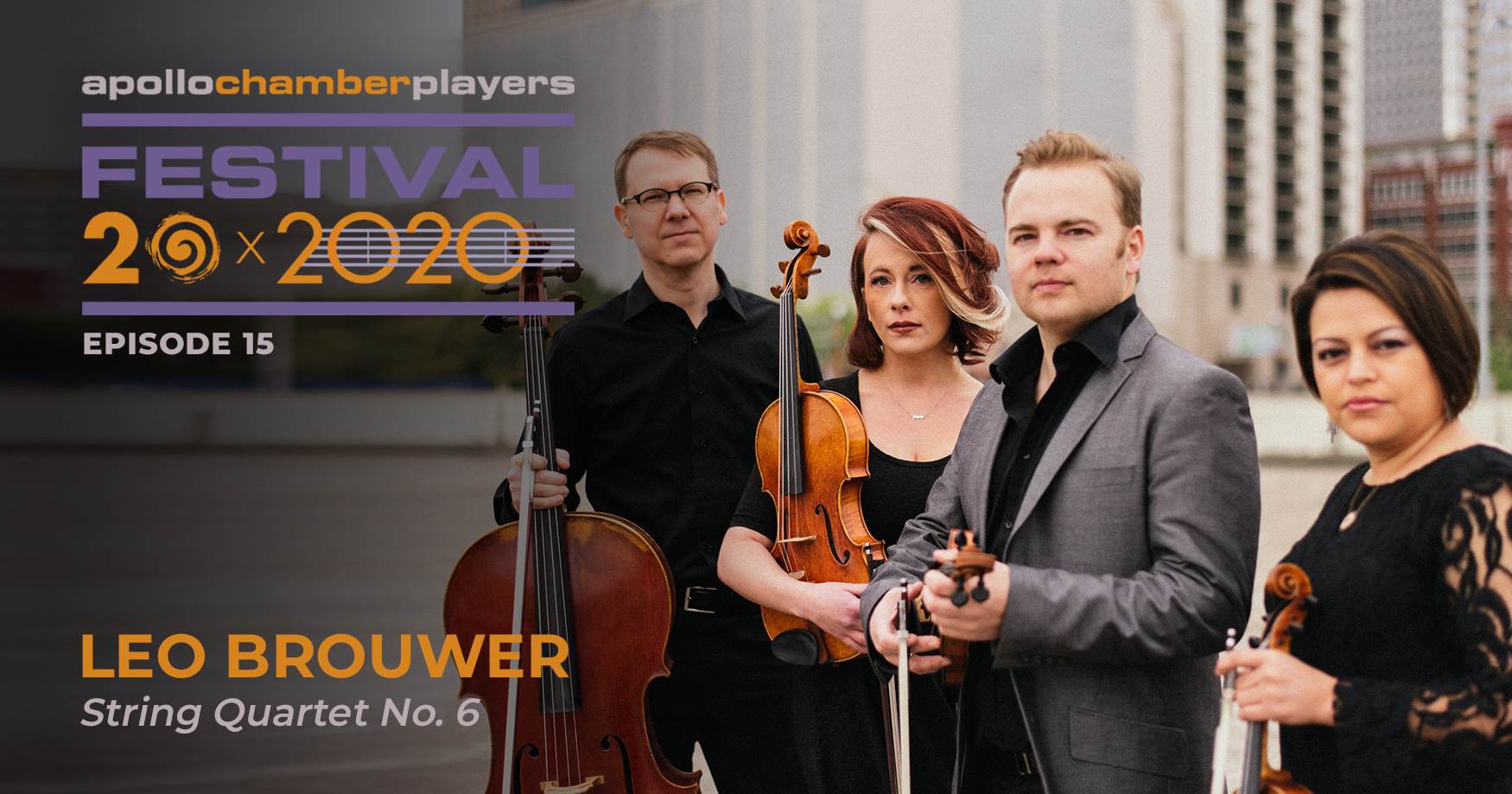 Cuarteto No. 6 “Nostalgia de las Montañas” was premiered in Houston TX on September 29, 2018.

Apollo Chamber Players would like to extend a special thanks to commission underwriters Lorenzo Martinez, Shelby Allen and Polly Johnson, and Roger and Candice Moore.

WITHIN EARTH is available from Navona Records.

Conveying the composer’s fondness for Brazil’s marvelous landscapes and mountain vistas, the quartet evokes nostalgia through a wistful melody, introduced in the opening movement by the first violin. This motive undergoes numerous melodic and rhythmic transformations throughout the piece, supported by undulating, asymmetric meters in the accompaniment lines. While there are no direct references to Brazilian beat patterns, the work’s groovy, shifting rhythms are inspired by the frenetic energy of this country’s popular Afro-Brazilian folk dances like the samba and jongo. The Preámbulo and Sonata movements end with nearly identical Codas of leaping intervals and repetitive, hard rock-sounding chords pulsating through irregular metric patterns (10/8, 2/4, 9/8, 5/4, 7/4…) to an epic conclusion.

States the composer: “My irregular meters are used as thematic extensions or reductions, and also a way to reaffirm the character and ideas of Afro-Cuban and Brazilian music.”

Composer, guitarist and music director, Leo Brouwer was born in Havana, Cuba in 1939. He studied with Isaac Nicola, Pujol’s pupil and specializing in composition, completed his studies at the Julliard School of Music and at Hartt College of Music.

In 1987 Brouwer was selected, along with Isaac Stern and Alan Danielou, to be honourable member of UNESCO in recognition for his music career – an honour that he shares with Menuhin, Shankar, Karajan, Sutherland and other musical luminaries.

Brouwer has conducted orchestras around the world including the Berlin Philharmonic Orchestra, the Scottish National Symphony Orchestra, the BBC Concert Orchestra and the Mexico National Symphony Orchestra. He has been heard as both composer and classical guitarist at many major international music events. His discography comprises over a hundred commercial recordings and his works have been recorded by John Williams, Julian Bream, Franz Bruggen and Harry Sparnay as well as The Toronto Festival, the London Sinfonietta and the Liège festival. Brouwer has also written many film scores including A WALK IN THE CLOUDS and Alfonso Arau’s internationally acclaimed LIKE WATER FOR CHOCOLATE.

He has served as General Manager of the Cuban National Symphony Orchestra for ten years and since 1992 conducted the Córdoba Orchestra in Spain. In 1998 Brouwer was awarded the Manuel de Falla prize and in 1999 the National music prize for Cuba. In recent years, Brouwer has continued his unique series of guitar concertos (Concierto No.7 “La Habana”, Concierto No.8 “Concierto Cantata de Perugia”, and “Concierto de Benicassim”) as well as writing for a rich variety of other ensembles, most notably his horn trio of 2002, PICTURES OF ANOTHER EXHIBITION. His latest concerto for guitar is his DOUBLE CONCERTO (Book of Signs), premiered by John Williams and Costas Cotsiolis on 27th January 2004 at the Megaron in Athens.

Houston TX based Apollo Chamber Players “performs with rhythmic flair and virtuosity” (The Strad) and has “found fruitful territory” (Houston Chronicle) through innovative, globally-inspired programming and multicultural new music commissions. Recent winner of Chamber Music America’s prestigious Residency Partnership award, the quartet has performed for sold-out audiences at Carnegie Hall twice in the past five years, and it holds the distinction of being the first American chamber ensemble to record and perform in Cuba since the embargo relaxation. Apollo is featured frequently on American Public Media’s nationally-syndicated program Performance Today.

Apollo is a passionate advocate of contemporary music. In 2014, the organization launched a bold project to commission 20 new multicultural works by the end of the decade. Now approaching its conclusion, 20×2020 features a roster of the world’s leading composers including multiple Grammy-winners Jennifer Higdon, Libby Larsen and Christopher Theofanidis. The group has collaborated with renowned ensembles and artists including the Houston Ballet and Houston Chamber Choir, Grammy/Emmy winner and Academy Award contributor Vanessa Vo, James Dunham, Ismail Lumanovski, and Indian Classical music star Chitravina N. Ravikiran, among others.

“Ancestral Voices is the most culturally relevant, politically topical, and necessary album of them all.” (American Record Guide) Apollo’s four studio albums, released by Navona Records, have garnered international acclaim and reached millions of listeners around the world. Apollo’s debut album, European Folkscapes, earned ‘Album of the Week’ honors by WQXR in New York City, and Blurred Boundaries has been lauded as “truly lovely music played exceptionally well by an adventurous and gifted ensemble.” (Audiophile Audition)