From November 6 – 18, 2019, Eleanor Alberga and Thomas Bowes toured China as the duo Double Exposure. They toured as part of the PARMA Recordings 2019 China Concert Tour season. It was their first concert tour together since the early 2000’s.

Tom writes about the trip:

Where is the middle of China? What is the most essentially Chinese place in this vast ocean of a country? Maybe it is this city of Xi’an. In the very centre of this city is a large Pagoda. Amongst all the chattering of modern commercial life –and there is plenty of that around and about this newly restored district – this great and lovely building radiates a timeless wisdom. I contemplate the astonishing fact of being here, and the great privilege of travel and music. Here I am, a violinist on my travels, and with the comfort of my dear wife, composer and pianist Eleanor Alberga. 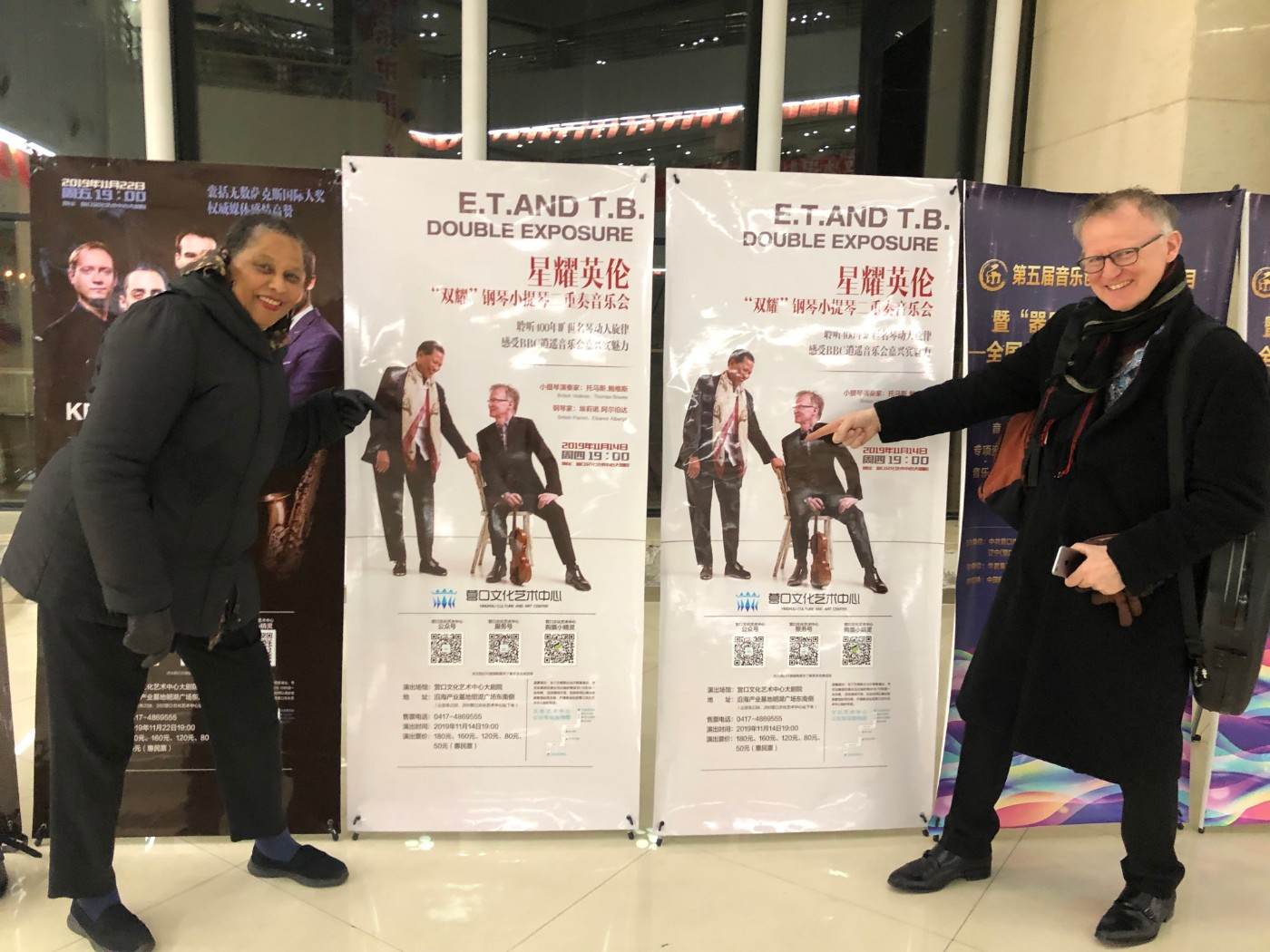 In Xi’an we played the third concert of our tour. To an attentive and grateful audience we offered music by Bach, Bartók, Ravel, Franck, Alberga, and a Chinese piece – it adds up to a survey of music for violin and piano of some 300 years. The acoustics in this almost-new hall are near perfect and the piano is a beautiful and well-maintained Steinway. What more could we ask for? We had already travelled many hundreds of miles on sleek high-speed trains and stayed in luxurious hotels. Our guide and companion was a charming and highly educated young man who navigates all the travel logistics with aplomb. We were well looked after.

Experience tells us that about half-way into a tour is when one feels most removed from the habitual strains – and comforts – of daily life at home. Re-engaging with all those communications left unfinished was still some way off, whilst thankfully left behind were those frantic few days before leaving when it seemed well-nigh impossible to get rehearsals, packing, and travel arrangements completed. (Oh, the stress of getting the visa done in time!) But fading too was that initial exhilaration of leaving for the life of touring – the glorious irresponsibility of never making one’s own bed – as the life of a tour takes over.

This routine is a strange one, this life of touring. We used to know it so well. It had now been many years since we regularly plunged into that life of almost too much that is new, as every glimpse from the window of a car, bus, or train brings something “other” and hitherto distant into the here and now. But there we were, in the middle of a tour, in the middle of China – Xi’an is a city where many roads cross, where the Dynasties of long ago made their Capital – away from the edges and the coast, landlocked, surrounded by countless miles of China. 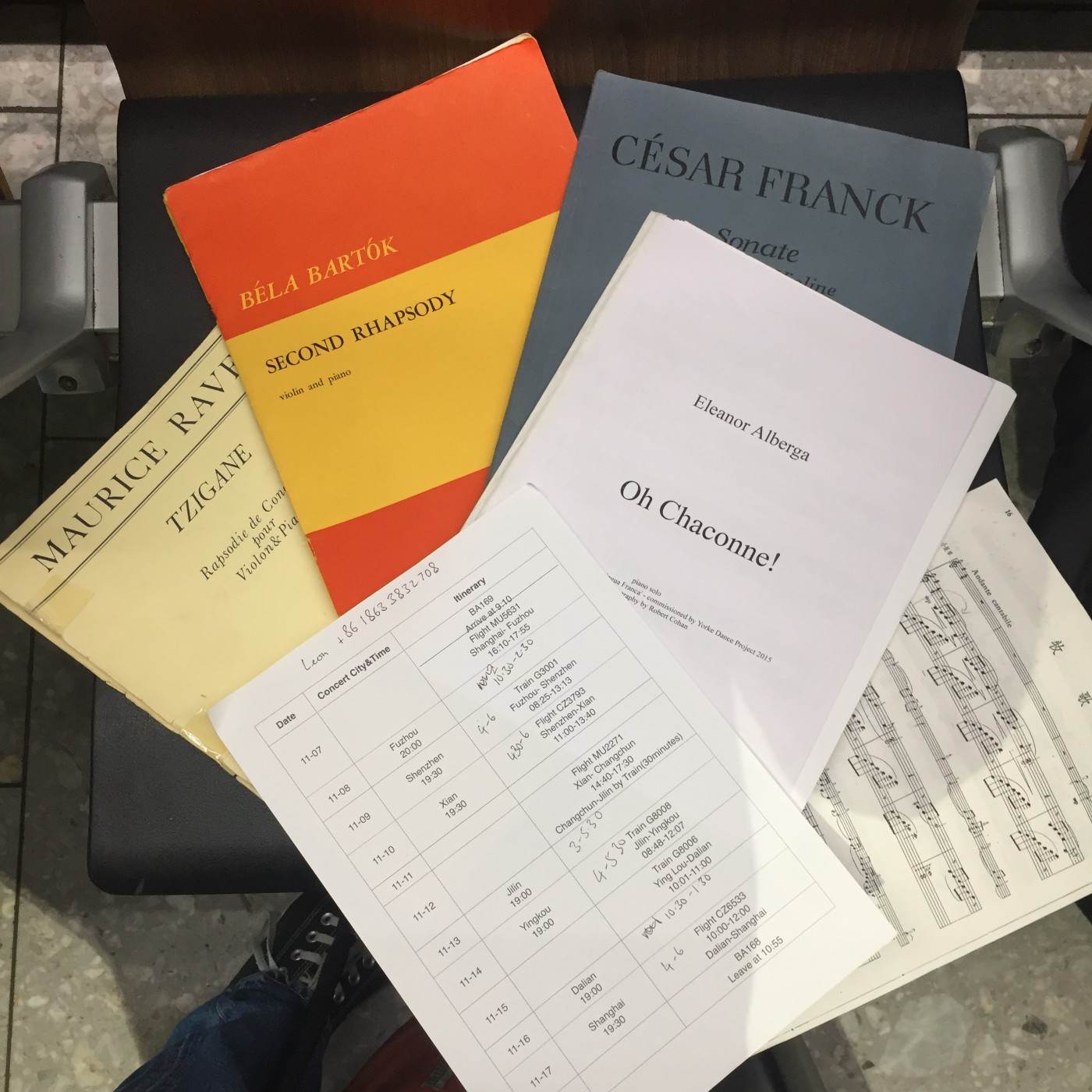 We had been scheduled to come to Xi’an back in 1997 when we had last visited China as a duo. For whatever reason our concert then didn’t materialise, though we had plenty to amaze us with visits to Beijing, Shanghai, Nanjing, Qingdao, and Kunming. Now 22 years later, here we are in a state of wonderment at what a day off from the concert stage has brought us: not less than a face to face encounter with China’s seemingly limitless past. We visited the 2200-year-old Terracotta Army. How does one process this experience?

I remember the massiveness of Stonehenge hitting me as a 13 year-old, later the Greek and Roman ruins that moved and astonished in European cities and museums; but here the most human and yet most frighteningly real past just hits one. These stone men look at you; you look at them. Each one different, yet the same. Do they look slightly annoyed at their recent wake-up call by the bewildered local farmer who stumbled across them in 1974 whilst digging a well?  This is now a much-visited place – one of the top tourist sites in China – and we were lucky to be there in November, one of the least busy times of the year. We could get close and were not pushed and shoved too much. We lingered, moved and humbled by this experience.

Viewing an exhibition of Medieval things in London years ago I remember sensing that it was the dreaming and yearning for the more distant past by the creators of the pictures, carvings, and sculptures I saw that brought me closer to their world. These dreamings and yearnings are feelings we all know and this bridge of common experience helped me feel really close to these people and to sense their feelings as part of our common humanity. I pondered a nation’s relationship with its past. In the reading I have done since returning from tour, I found in Patricia Buckley Ebrey’s excellent book something about this feeling for the past as a defining point of difference. Whereas the West regards the rising and falling of Empires and their particular traits as inevitable, one needs a very different perspective for what she describes as the “Eastern edge of Eurasia”; “There is” she writes, “no sense that younger civilisations supplant ageing ones, but that civilization progresses through a series of yin-yang like reversals of direction from excessive disorder to excessive order and back again.”

Back in 1997 we traveled to Shanghai’s Porcelain Museum and saw an unfolding of this particular art form over China’s great dynastic pageant. We had too in that City spent a pleasant evening on the Bund, that most colonial spot of China’s historically most cosmopolitan City. We strolled along among dense packed crowds and watched earth being moved and scaffolding erected on the farther side of the river. That of course was emerging Pudong. Another City – or another part of this mega city – but now in 2019, it was palpably and confidently present, with its thrusting buildings and ordered streets of endless commercial goings on. In 1997 bicycles had outnumbered cars. We had played in the old concert hall – a rather charming though somewhat faded colonial style building from the 1930’s. This time we played in the shiny new Oriental Arts Centre in Pudong. 22 years ago this would have been a swamp, and our adjacent hotel, fields. 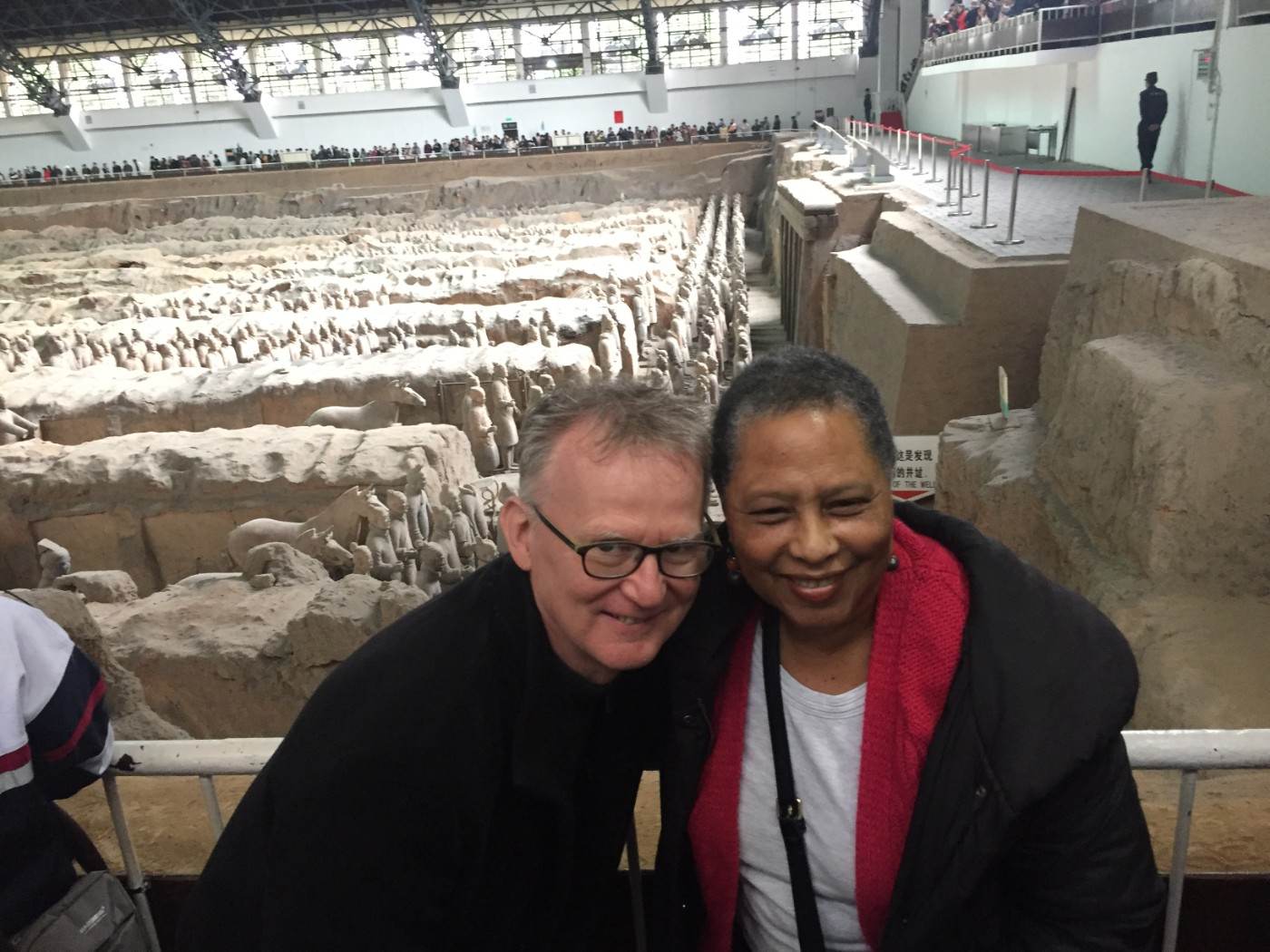 Our tour had started in Foujou (warm and humid) and included concerts in cities as diverse as Shenzhen, Dalian, Jilin, and Yingkou. In Foujou we had encountered line dancing and the large square where this was happening displayed a (now rare we learned) statue of Chairman Mao. In Shenzhen it was warmer still and a young audience had greeted us with broad smiles and much good will. I had made friends with a retired violinist and he had eagerly inspected my violin. This city is a particular example of China’s astonishing growth – in a single generation sprouting from nothing to be a world leader in all sorts of fields, most notably IT. Later we encountered snow and ice in Jilin and Yingkou. We had played concerts in some beautiful new halls as well as older style theatres; we had eaten all manner of fabulous food; the dumplings of Jilin and the hot pot in Dalian particular highlights. Everywhere, audiences were warm and appreciative. We ended our tour in Shanghai.

But despite those Terracotta figures, the abiding memory of this extraordinary trip is perhaps from the centre of that great City of Xi’an. A short stroll from where we played in the beautiful new concert hall stands that great Pagoda. This is not as ancient as the mausoleum guarded by the Terracotta warriors, but dates from the Tang dynasty some 800 years later. To say this building dominates would be wrong; it radiates something eternal and wise. The Pagoda has been through rebuildings and alterations and at least one earthquake; it leans perceptibly several degrees. From here in the year 629 the young monk Xuanzang set out on a journey to India in search of truth and enlightenment. This originally forbidden odyssey turned into a 17-year journey and Xuanzang’s return and re-encounter with his Emperor Taizong is one of the most fascinating in history. The story has been told and re-told many times, most notably in the Ming Dynasty Classic Journey to the West (16th century), and Arthur Waley’s 1942 novel Monkey: A Folk-Tale of China.

Perhaps I will be lucky enough to come here again, but I hope a little sooner than my 22-year absence from China before this trip; or the 17-year span of Xuanzang’s wanderings. Then I can see again what changes there have been here – and in me. The Pagoda will still be there I am rather sure. Life moves on. Life stays the same. 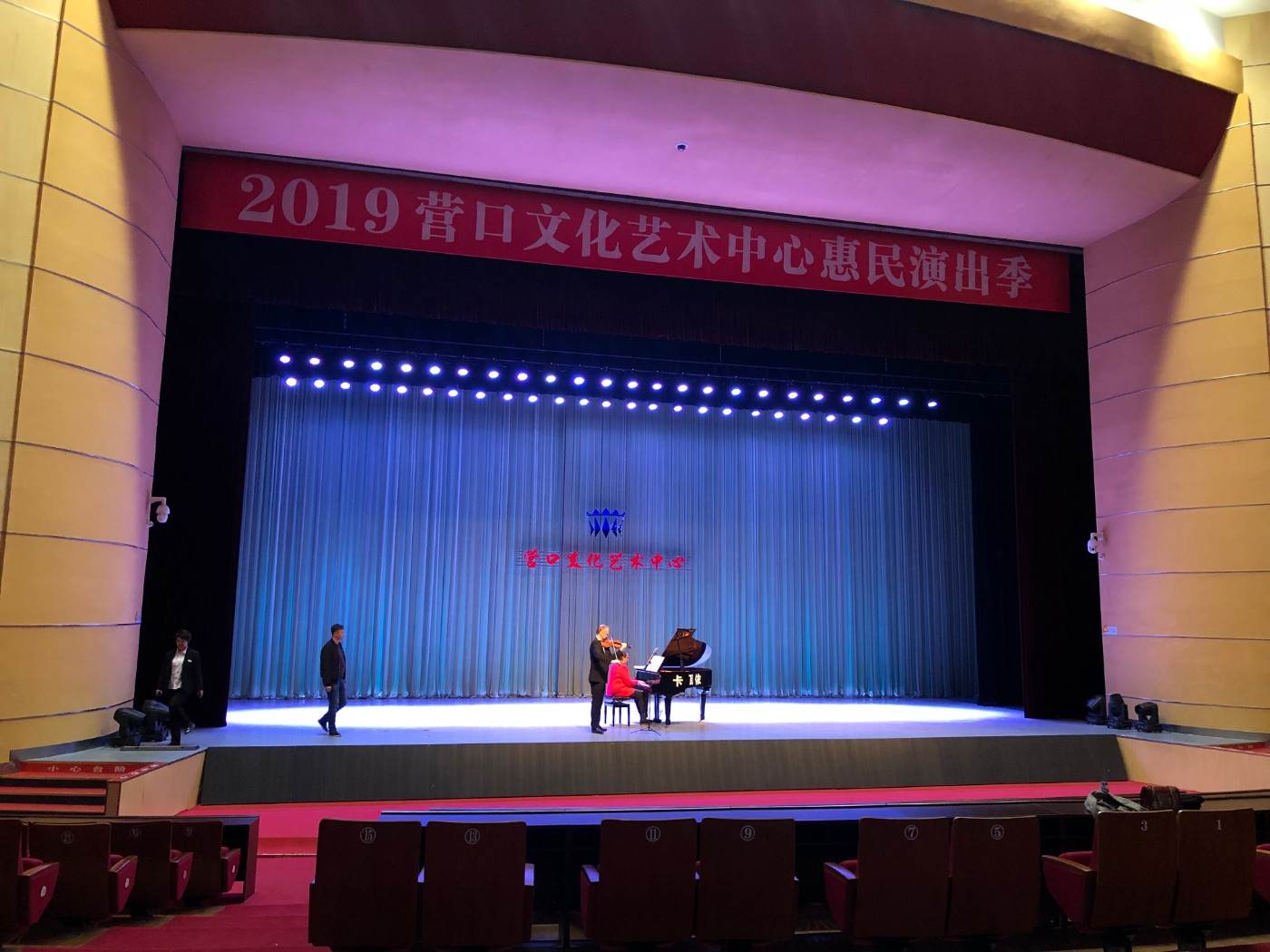