The Inside Story: Karen Sunabacka and CURLICUE

Wide skies, whistling winds, and a love for the great outdoors take center stage on Karen Sunabacka’s CURLICUE, a collection of eight works for solo piano performed by Darryl Friesen. Each piece tells a story of Sunabacka’s wilderness adventures, transporting listeners to the Canadian woodlands and prairies for an adventure all their own.

Today, Karen is our featured artist in “The Inside Story,” a blog series exploring the inner workings and personalities of our composers and performers. Read on to learn why this album is a monumental achievement for Karen, and how science fiction novels serve as her preferred escape from reality…

I started playing cello when I was 6 and the first solo professional cellist I remember seeing live was Zara Nelsova. I was probably around 10 or 11 when I saw her and I was completely entranced by her performance and was amazed that she had been born in Winnipeg. But also, during my university years as I was studying cello and composition, I was completely fascinated by Jacqueline du Pré. Her story was incredible and sad, and although she had already died by the time I had learned about her, I would listen to her recordings over and over. I learned Elgar’s Cello concerto because of her performances.

I went into music school in the mid 1990’s not sure where exactly it would lead to, I just knew that I loved music and music-making. There weren’t a lot of women composers for me to look up to, and I didn’t think much about composing (and doing that as a career) until I met Kelly-Marie Murphy (a Canadian composer born in 1964) when I was in my undergraduate degree at the University of Manitoba. She was one of the featured composers’ during Winnipeg’s New Music Festival in 1998 or 1999. I had started to take some composition courses and was really enjoying them and realized that she was making a living from composing. That’s when I realized I could be a composer and started to think about it seriously.

I love reading science fiction and fantasy books and watching similar television series. It is always the perfect way for me to relax and explore a new or strange world.

Funnily enough, it would be piano! I am a terrible piano player and even though this album is all my piano music, I can’t really play most of the music I have written for the piano! Because I teach composition and theory I often have to demonstrate things on the piano and it is embarrassing how terrible I am. My instrument is the cello, but that does not work for demonstrating chord progressions in theory!

Darryl Friesen is an amazing pianist, and there are so many places where he just shines and performs my music in ways that I could never have imagined. However, if I were to pick one part, there is a moment towards the end of Curlicue (the title track) where the music resolves into a chorale. After all the dissonance of the first section and the busy texture of the middle section, this resolution is just so satisfying to me, every time.

This is a dream come true. I have been wanting to get this album done for around 10 years, and there were so many things that needed to come together to make this happen and it is so satisfying that it is complete. I now have a professional album that can be purchased, and that is available to more people than ever. Now that I have done this once, I am looking forward to my next album. 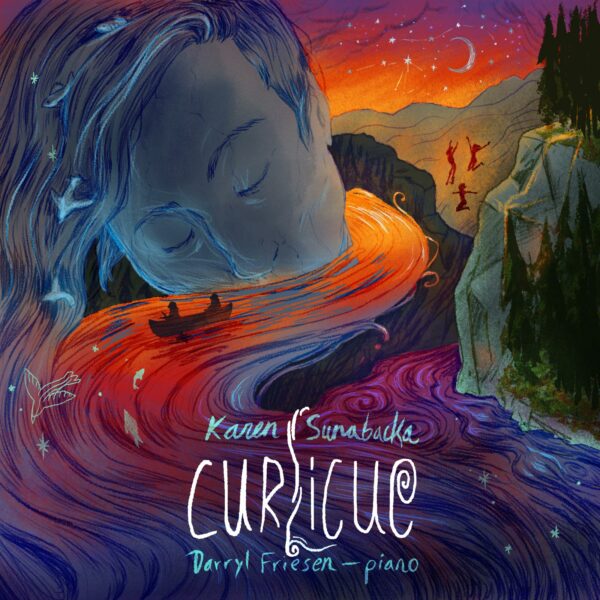 CURLICUE is available now from Ravello Records. Click here to visit the catalog page and explore this album.