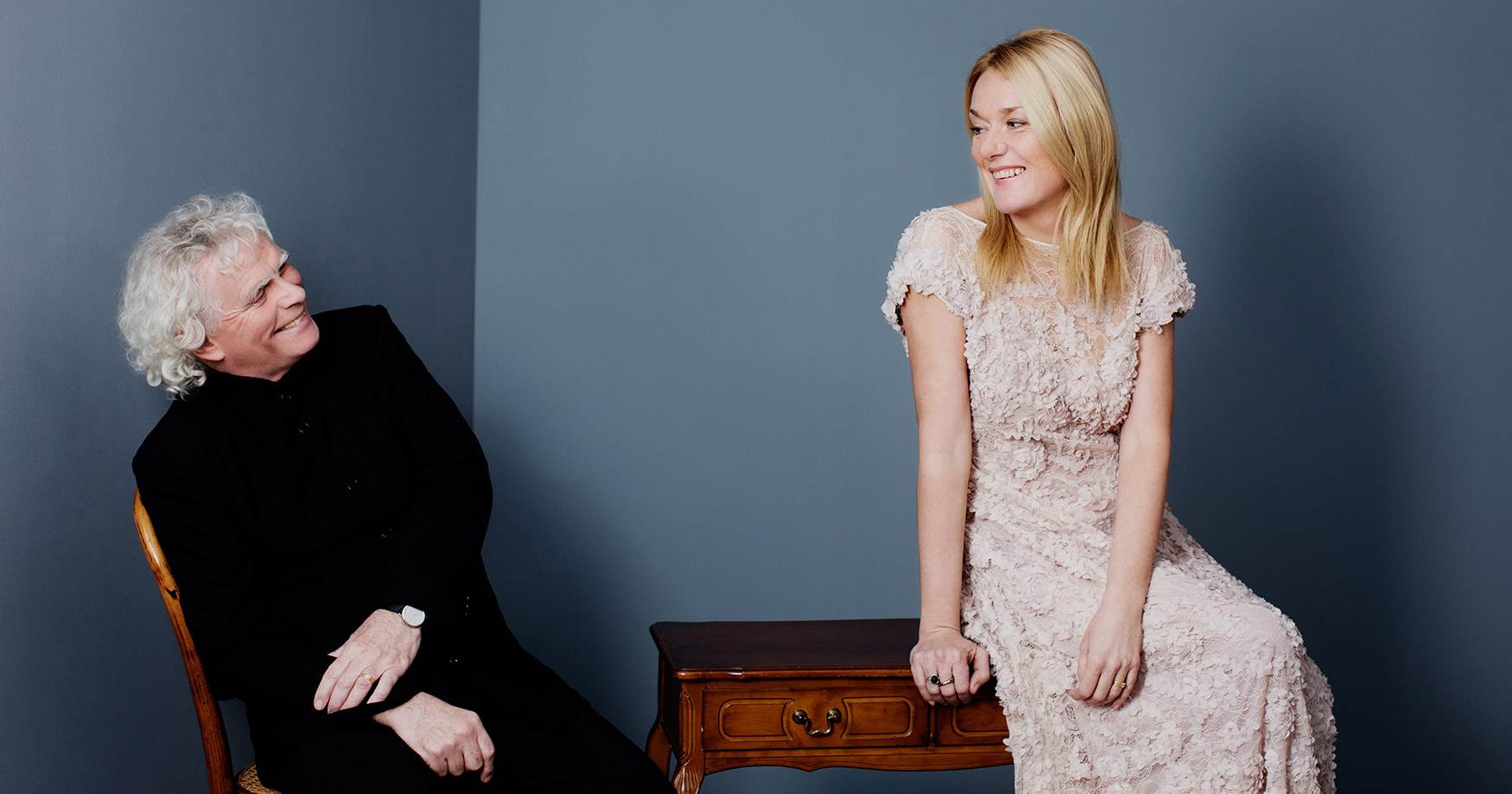 Meet two great artists, Magdalena Kožená and Sir Simon Rattle, in the breathtaking architecture of the Villa Tugendhat in Brno. This magnificent UNESCO world heritage building will host a unique and intimate song recital with a special selection of the finest Czech music. Songs by Antonín Dvořák, Leoš Janáček, Bohuslav Martinů, Erwin Schulhoff and Petr Eben will be performed by Magdalena Kožená in her home town with her husband, Sir Simon Rattle, at the piano. Enjoy this unforgettable musical experience made especially for Brno – UNESCO Creative City of Music.

This video is no longer available. 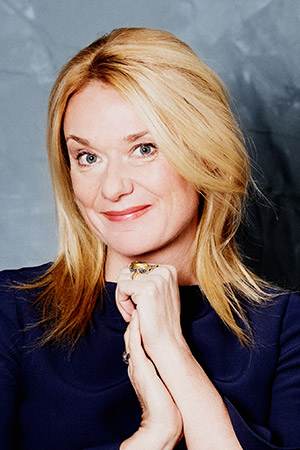 Magdalena Kožená was born in the Czech city of Brno and studied voice and piano at the Brno Conservatory and later with Eva Blahová at Bratislava’s Academy of Performing Arts. She has been awarded several major prizes both in the Czech Republic and internationally, culminating in the Sixth International Mozart Competition in Salzburg in 1995.

She was signed by Deutsche Grammophon in 1999 and immediately released her first album of Bach arias on its Archiv label. Her recital debut recording, an album of songs by Dvořák, Janáček and Martinů, appeared on Deutsche Grammophon’s yellow label in 2001 and was honoured with Gramophone‘s Solo Vocal Award.  She was named Artist of the Year by Gramophone in 2004 and has won numerous other awards since, including the Echo Award, Record Academy Prize, Tokyo, and Diapason d’or. Most recent releases for Deutsche Gramophon have included ‘Monteverdi’ with La Cetra Baroque Ensemble (2016), ‘Prayer’ for voice and organ with Christian Schmidt (2014), ‘Love and longing’ with the Berliner Philharmoniker and Sir Simon Rattle (2012). The album ´Cole Porter´ recorded with Ondřej Havelka and his Melody Makers appeared on Magdalena´s own label Brnofon in 2017, the two latest CD was recorded on the Dutch label Pentatone in 2019.

Kožená has worked with many of the world’s leading conductors, Claudio Abbado, Pierre Boulez, Gustavo Dudamel, Sir John Eliot Gardiner, Bernard Haitink, Nikolaus Harnoncourt, Mariss Jansons, James Levine, Sir Charles Mackerras and Sir Roger Norrington. Her list of distinguished recital partners includes the pianists Daniel Barenboim, Yefim Bronfman, Malcolm Martineau, András Schiff and Mitsuko Uchida, with whom she has performed at such prestigious venues as Carnegie Hall, Wigmore Hall, Alice Tully Hall and the Amsterdam Concertgebouw, and at the Aldeburgh, Edinburgh and Salzburg festivals. Kožená’s understanding of historical performance practices have been cultivated in collaboration with outstanding period-instrument ensembles, including the English Baroque Soloists, the Gabrieli Consort and Players, Il Giardino Armonico, Les Musiciens du Louvre, the Orchestra of the Age of Enlightenment, Venice Baroque Orchestra and Le Concert d’Astrée. She is also in demand as soloist with the Berlin, Vienna and Czech Philharmonics and the Cleveland, Philadelphia and Royal Concertgebouw Orchestras.

Kožená first performed at the Salzburg Festival in 2002 as Zerlina in Don Giovanni and returned in 2013 as Idamante, a role she has also sung for the Glyndebourne Festival and in Berlin and Lucerne. Kožená made her first appearance at New York’s Metropolitan Opera in 2003 as Cherubino in Mozart’s Le nozze di Figaro and has since been a regular guest. She sang Zerlina for the company’s tour to Japan in 2006 and returned to New York to take the title-role in Jonathan Miller’s production of Debussy’s Pelléas et Mélisande in 2010/11. Her opera credits also include Angelina in Rossini’s La Cenerentola (Royal Opera House, 2007), Oktavian in Richard Strauss’s Der Rosenkavalier (Berlin Staatsoper, 2009 and Baden Baden Easter Festival, 2015), the title-role in Bizet’s Carmen (Salzburg Easter and Summer Festivals, 2012), Charpentier’s Médée (Basel Opera 2015) Martinů’s Juliette (Berlin Staatsoper, 2016), Magueritte in Berlioz´s La Damnation de Faust (Berlin Staatsoper, 2017) or Phaidre in Rameau´s Hippolyte et Aricie (Berlin Staatsoper, 2018).

Kožená was appointed a Chevalier de l’Ordre des Arts et des Lettres by the French government in 2003 for her services to French music.

Due to the anti-pandemic measures in the first half of 2020, neither the premiere of the new production of Mozart’s Idomeneo at the Berlin Staatsoper nor the swing tour with Ondřej Havelka and his Melody Makers took place. We will inform you about the replacement dates of the cancelled events in our calendar. Nevertheless, in July Magdalena rehearsed another operatic role “tailor-made” for her: next year she is going to appear as The Waitress in the eagerly awaited premiere of Kaiji Saariaho’s new opera. This Finnish composer’s fifth operatic work titled Innocence will be staged at the famed Aix-en-Provence Theatre Festival. After the holidays, Magdalena is planning a European tour with the Basel baroque ensemble La Cetra led by Andrea Marcone, or Mahler’s Song of the Earth with DSO Berlin and Sir Simon Rattle. At the end of the year she looks forward to singing the role of Ruggiero in Handel’s opera Alcina, re-studied under Giovanni Antonini at the Zurich Opera House, starring Cecilia Bartoli in the title role. 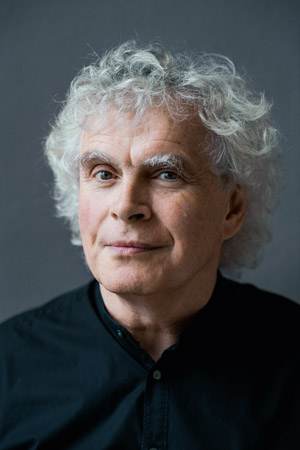 Sir Simon Rattle was born in Liverpool and studied at the Royal Academy of Music.

From 1980 to 1998, Sir Simon was Principal Conductor and Artistic Adviser of the City of Birmingham Symphony Orchestra and was appointed Music Director in 1990. In 2002 he took up the position of Artistic Director and Chief Conductor of the Berliner Philharmoniker where he remained until the end of the 2017-18 season. Sir Simon took up the position of Music Director of the London Symphony Orchestra in September 2017.

Sir Simon has made over 70 recordings for EMI record label (now Warner Classics) and has received numerous prestigious international awards for his recordings on various labels. Releases on EMI include Stravinsky’s Symphony of Psalms (which received a Grammy Award for Best Choral Performance) Berlioz’s Symphonie fantastique, Ravel’s L’enfant et les sortileges, Tchaikovsky’s Nutcracker Suite, Mahler’s Symphony No. 2, Stravinsky’s The Rite of Spring and Rachmaninov’s The Bells and Symphonic Dances, all recorded with the Berliner Philharmoniker. Simon’s most recent recordings include Berlioz’s Le damnation de Faust, Helen Grime’s Woven Space, Debussy’s Pelléas et Mélisande and Turnage’s Remembering, which were all released by the London Symphony Orchestra’s own record label, LSO Live.

As well as fulfilling a taxing concert schedule in London, Sir Simon regularly tours within Europe, North America and Asia and has strong longstanding relationships with the world’s leading orchestras. Initially working closely with the Los Angeles Philharmonic and Boston Symphony Orchestras, Simon has also recently worked with The Philadelphia Orchestra and the Metropolitan Opera. He regularly conducts the Symphonieorchester des Bayerischen Rundfunks, Staatskapelle Berlin and Wiener Philharmoniker, with which he has recorded the complete Beethoven symphonies and piano concertos with Alfred Brendel. Simon is also a Principal Artist of the Orchestra of the Age of Enlightenment and Founding Patron of Birmingham Contemporary Music Group.

The 2019-20 season will see Sir Simon embark upon tours to Hong Kong, China and Vietnam; the United States of America and Europe with the London Symphony Orchestra. He will also return to the Symphonieorchester des Bayerischen Rundfunks with a programme of Strauss, Schumann and Rameau, the Berliner Philharmoniker for Beethoven’s Christus am Ölberge and will tour Europe and the US in a chamber music project with mezzo-soprano Magdalena Kožená. This season’s operatic highlights include Der Rosenkavalier at the Metropolitan Opera, Wozzeck at the Festival d’Aix-en-Provence and Idomeneo at the Deutsche Staatsoper Berlin.

Sir Simon Rattle was knighted in 1994 and in the New Year’s Honours of 2014 he received the Order of Merit from Her Majesty the Queen.