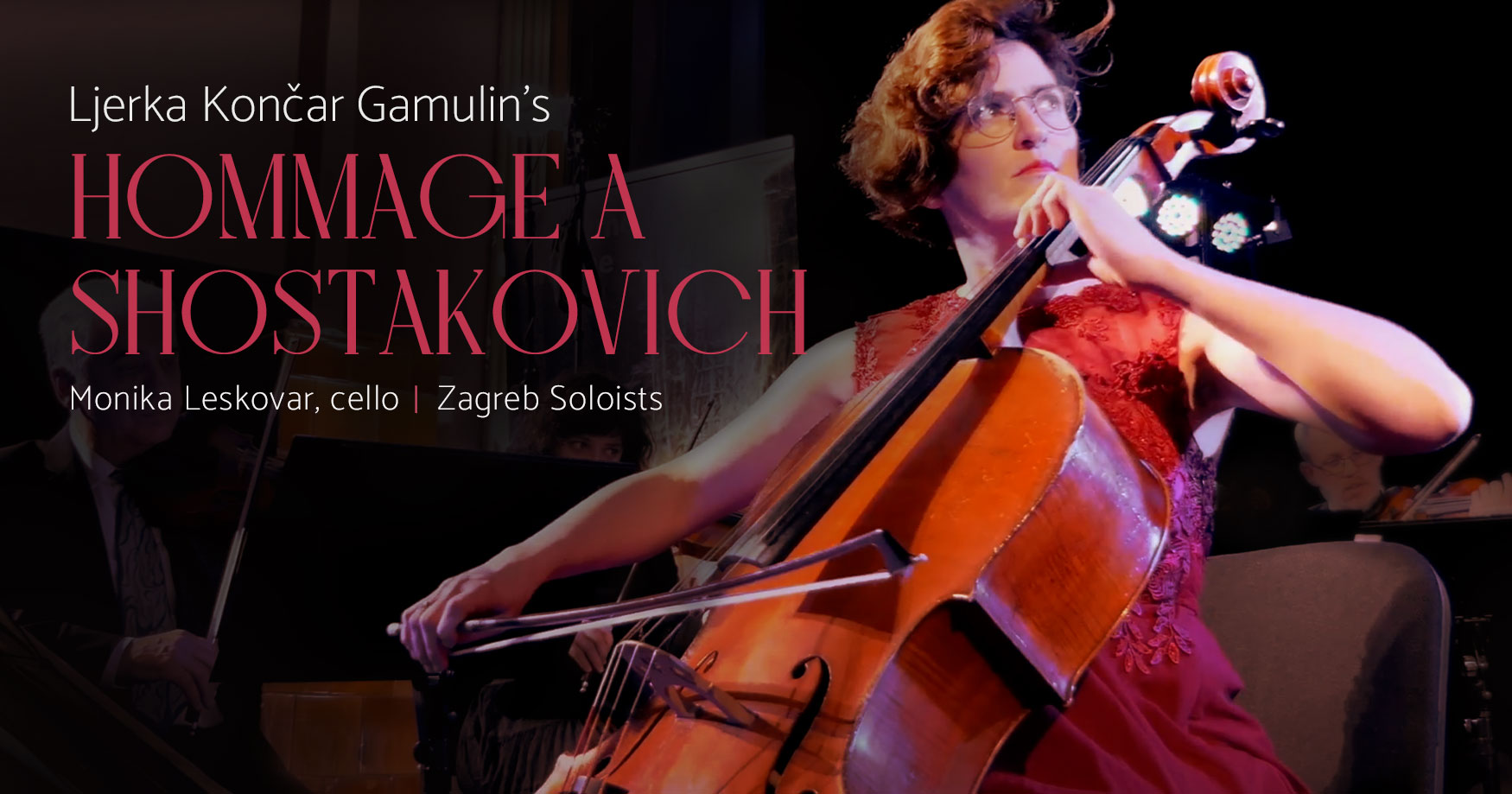 Hommage a Shostakovich for Cello and Strings by young Croatian cellist and composer Ljerka Končar Gamulin was premiered at the Fall 2021 Days of Milko Kelemen Festival. Končar Gamulin has won prizes at the Dmitry Kabalevsky International Competition in Moscow for Cantata Zrinski for Choir and Orchestra and Hommage a Shostakovich for Cello and Orchestra.

Since its founding in 1995, Days of Milko Kelemen gathers prominent Croatian and world-famous artists every year in Slatina, mostly thanks to the international reputation of the late great Croatian composer to whom the contemporary music festival is dedicated.

In the past 20 years, 100 ensembles and 74 soloists from 18 European countries, India, Israel, China, Armenia, Japan, the United States, and Australia have performed in the festival. The artistic visions of Milko Kelemen are the leitmotif in the entire program, complemented and enriched by other forms of creativity including fine arts, film, performing arts, and literature.

Video created by A Classic Production.

Cellist, composer and sound producer Ljerka K.G. started to play cello at the age of five, winning as a child numerous prizes and awards on Croatian and European International Cello Competitions. She broaden her musical horizons working with famous cellists such as Natalia Shahowskaya, Leslie Parnas, Eleonore Schoenfelc and David Grigorian. As a soloist Ljerka appeared in Salzburg, Paris, Bruxelles and London, but very soon started to compose her own music in genres from classical music, jazz to film music and video spots.

Her radio and TV recordings, video spots and appearances with classical and jazz musicians always show a wide variety of interests in stile and expression as a complete musician. Ljerka’s video spot Tesla’s Lightning for cello and gong won gold medal on USA portal Beet 100.

The latest acknowledgment of her work as a composer was Prize in Moscow at the Dmitri Kabalewsky International Competition for Cantata Zrinski for choir and orchestra and Homage a Shostakovitch for cello and orchestra.

Fascinated with nature, Ljerka moved with her family and four dogs, cats and other pats from the urban center of Zagreb to a wooden house with studio in deserted area of mount Sljeme.

Croatian cellist Monika Leskovar (born Kreutztal, Germany, 1981), studied with Dobrila Berkovic-Magdalenic at Elly Bašić Music School in Zagreb and later with Valter Dešpalj. In 1996 she became a student of David Geringas at the Hanns Eisler Hochschule für Musik in Berlin, where – from 2006 to 2011 – she was an assistant. From October 2012 she teaches cello at Lugano Conservatory of Music in Switzerland. In masterclasses she worked together with Mstislav Rostropovitch and Bernard Greenhouse. Winner of several prizes at international cello competitions – International Tchaikovsky for Young Musicians (Sendai, 1995), Antonio Janigro (Zagreb, 1996), Rostropovich (Paris, 1997), Eurovision Grand Prix (Vienna, 1998), Roberto Caruana “Stradivari” (Milano, 1999), International ARD (Munchen 2001), 5th Adam (New Zealand, 2003). Sofia Gubaidulina says of her: “Monika perfectly performed my Preludes for solo violoncello… She is truly remarkable, and simply I adore her… Monika is the sort of talent that only appears by the Grace of God”. She performed as soloist with orchestras such as Bavarian Radio Symphony Orchestra, Moscow Philharmonic, Sendai Philharmonic, Slovenian Philharmonic, St. Petersburg Symphonic Orchestra, Zagreb Philharmonic, Essen Philharmonic, Prague Chamber Orchestra, Lithuanian Chamber Orchestra, Kremerata Baltica, Zagreb Soloists, with conductors such as Valerij Gergiev, Thomas Hengelbrock, Krzysztof Penderecki, and in solo recitals, chamber music projects and noted festivals like Lockenhaus, Schleswig-Holstein, Rheingau, Dubrovnik, Casals Festival (Tokyo), Rostropovich Festival (Riga), Zagreb International Music Festival collaborating with Gidon Kremer, Yuri Bashmet, Boris Berezovsky, Julian Rachlin, Itamar Golan, Tabea Zimmermann, Sofia Gubaidulina, Mario Brunello, Nikolai Zneider, Jeanine Jansen and Kolja Blacher, among others. Since 2005 she collaborates with the cellist and composer Giovanni Sollima, with whom she recorded the album “We Were Trees”, recently published by Sony/BMG. In 2008 she recorded the G-major Cello Concerto of Stamitz and the Danzi Variations on a theme from “Don Giovanni” for the label OEMHS classics. Monika Leskovar plays a cello by Mantegazza, Milano 1765 loaned to her by Kronberg Academy.

Founded in 1953 as a Radio Zagreb ensemble under the artistic leadership of the renowned cellist Antonio Janigro, Zagreb Soloists gained reputation as one of the world’s most outstanding chamber orchestras.

Since 2012 the ensemble performs under the leadership of Sreten Krstic who is also the leader of the Munich Philharmonic.

Zagreb Soloists’ performing repertoire entails baroque, classicist, romantic and contemporary music, with particular attention given to Croatian composers – both of those who represent the musical heritage and those of the younger generation.

They recorded more than seventy albums for companies like Vanguard House, EMI, ASV, Eurodisc, Melodia, HISP-vox, Pickwick audite, cpo and Croatia Records. In June 2014 the ensemble has also released a compact disc with works by Boris Papandopulo, performing with pianist Oliver Triendl – the project which united both local and international music criticism – giving the CD highest rates and numerous commendations. One of the most notable recent recordings is the album with works by Ernesto Cordero, featuring prominent soloists such as the violinist Guillermo Figueroa and the guitarist Pepe Romero (Naxos 2010) that subsequently nominated for the Latin Grammy Award.