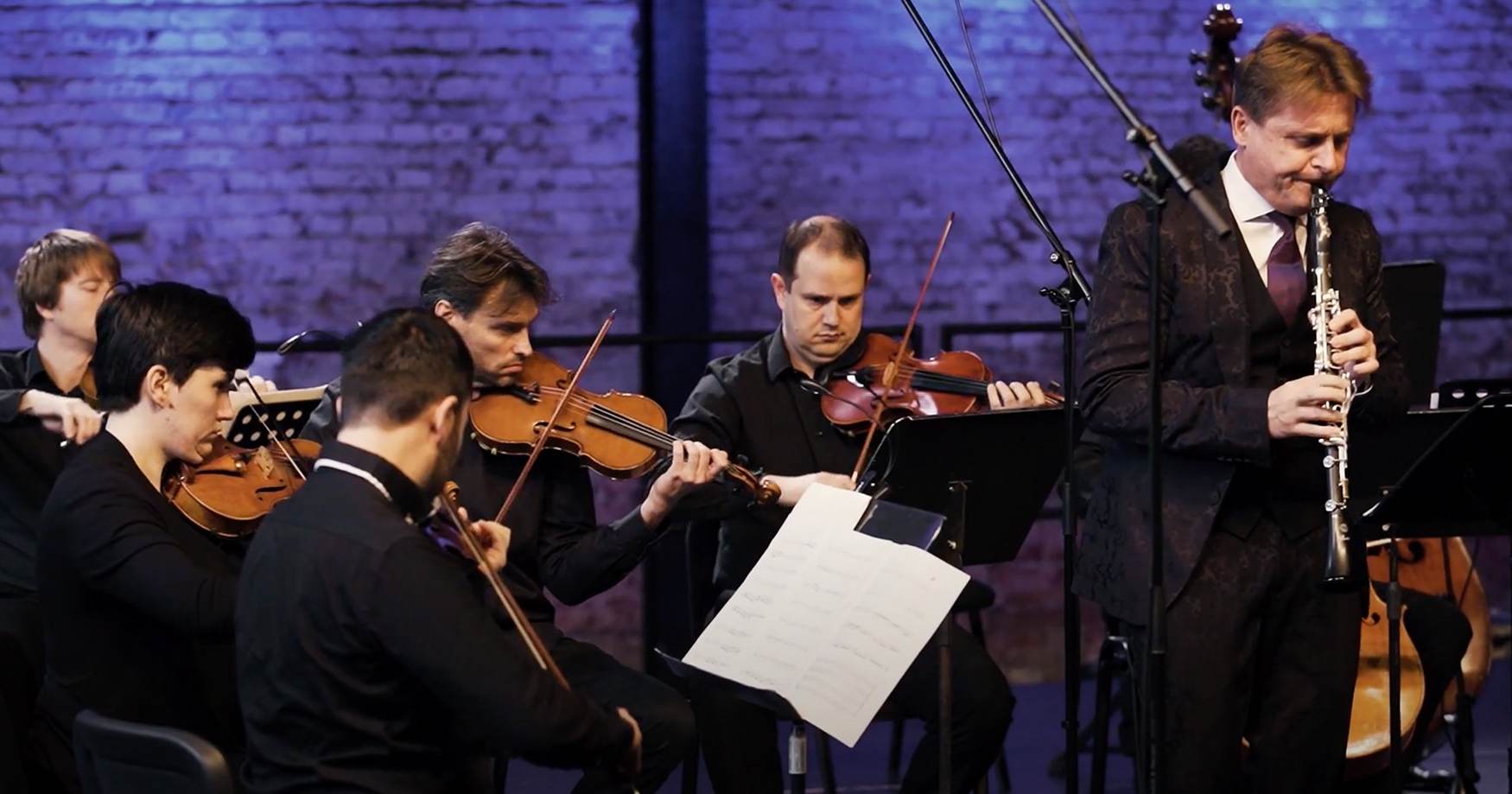 Join PARMA Recordings and composer Antun Tomislav Šaban for a performance of Šaban’s Concerto for Clarinet and Strings with soloist Radovan Cavallin. Joined by the Slovenian Philharmonic String Chamber Orchestra and under the baton of Steven Loy, Cavallin presents the music of his longtime friend and musical comrade. Concerto for Clarinet and Strings is dedicated to Cavallin, his career, and the friendship between the composer and performer.

Concerto for Clarinet and Strings was written at the turn of 2018/2019 and is dedicated to Radovan Cavallin since it was written to mark his 50th birthday, his nearly equally long career in playing clarinet and our friendship that has lasted almost as long.

I also used to be a clarinetist and was his father Giovanni’s student. However, with Radovan alive and kicking that did not make much sense and, as I was an ambitious and rational young man, I decided to become a composer. He is the one to blame and I am grateful to him to this day!

Back in the day, sometime in the late 1980s, when we were playing the clarinet together, I tried to write my first compositions. For clarinet, of course, since I wanted to play them myself as it was unlikely that somebody else would want to learn something that difficult which was, on the top of that, written by a child. However, another child liked it, and that was Radovan, who already had one or two degrees. In two hours, he learned to play what I had been practicing for two months. So my Elegy and Rondo for clarinet and piano found their way into his repertoire, along with concertos by Jean Françaix, Henri Tomasi and other composers I had not heard of, nor had they heard of me.

Commemorating the 30th anniversary of that crucial moment in my career, Radovan and I in 2018 produced a record (an album or a CD) where a recording of Elegy and Rondo were published, along with my newest works for clarinet: Two Reminiscences. They reminiscence Elegy and Rondo thirty years later. Or should I put it: how 47-year-old me cleans the mess left by the 17-year-old me. Oh yes, on that album we have also included compositions for clarinet by composers like Anđelko Klobučar, Dubravko Detoni, Emil Cossetto and a couple of others I have heard of, and who had heard of me too.

Radovan and I liked our collaboration so much that we struck another deal: now when we are two men on the top of our careers, and still capable of playing and composing, I shall write a clarinet concerto and Radovan shall premiere it. So it was!

Antun Tomislav Šaban (born in Zagreb, Croatia in 1971) is a composer of classical and jazz music whose works were performed by leading orchestras, chamber ensembles and soloists in his home country, as well as in numerous European countries, China, Australia, and the USA. He also acts as a conductor and a music producer in various musical setups on concert stages and in recording studios. He publishes his works as sheet music, sound and video recordings through his family owned company Fonart.

Tomislav studied music in his native Zagreb, in Miami (USA) and Vienna (Austria), where he obtained Masters Degree in classical composition in 1998. He was awarded several prizes for his compositions in the fields of symphonic and jazz music, as well as for his activities in the recording industry. His transcription of Vivaldi’s Four Seasons for two pianos appeared in 2001 on a CD release by EMI Classic and rated among the best selling classical albums in several European countries. He acts regularly as a jury member at international composition contests for contemporary classical, improvised or stage music.

He holds the post of the Secretary General of the Croatian Composers’ Society (HDS) since 2001. Between 2000 and 2013 he was engaged as the artistic director of HDS jazz projects, producing around 200 concerts with musicians ranging from jazz legends to emerging artists and crossover projects.

He is one of the founding members of European Composer and Songwriter Alliance (ECSA). Between 2013 and 2019 he acted as Vice-President of ECSA and chairman of its committee for the classical/arts music.

He is also active within the International Confederation of Societies of Authors and Composers (CISAC) where he is a member of the Executive Committee of its International Council of Music Authors (CIAM) since 2007.